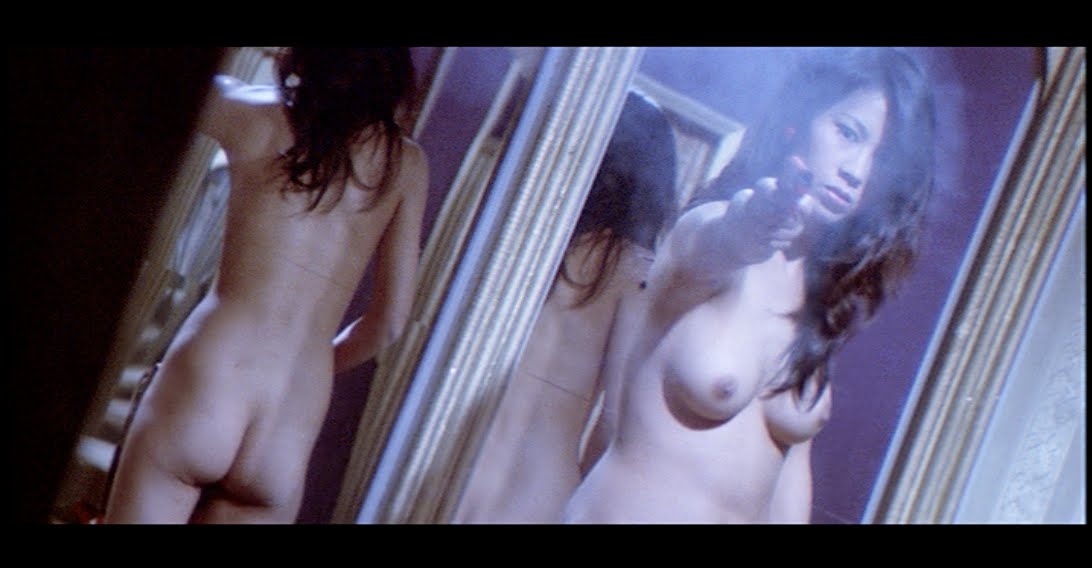 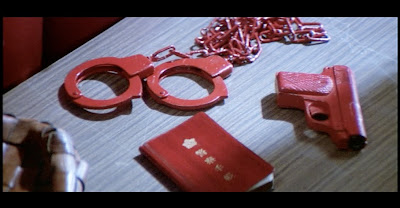 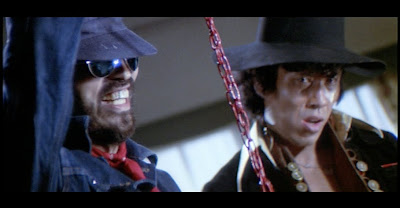 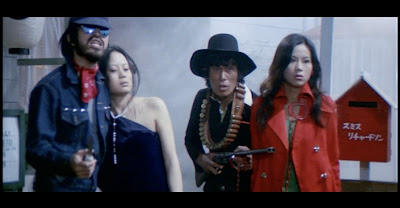 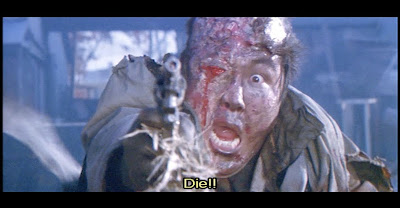 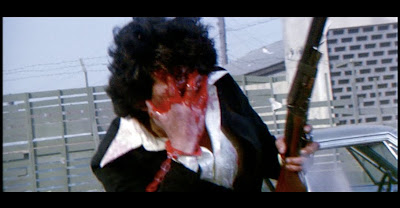 "The city’s lights must strain you
You must long for your mother’s breast
Oh, you poor lost puppy
If you lose faith, it’s all over

The world is filled with such sadness
It is difficult to keep walking towards the future
“Someday, happiness will come to me”
I believe this in my heart and live on"


At completely the other end of the spectrum from the genteel ‘Wandering Ginza Butterfly’, we have ‘Zero Woman: Red Handcuffs’, adapted from the long-running manga created by Toru Shinohara. The Zero Woman stories centre on the character of Rei (here portrayed by Miki Sugimoto), a renegade ex-cop/assassin whose raison d’etre is hunting down rapists and other extremely bad men, posing as an innocent victim and then executing them when they least expect it, often by means of her trademark red handcuffs, which she manages to use as a kind of midair decapitation device. All of which could be seen as potentially jolly and female-affirmative stuff, were it not for the employment of the old ‘have your cake and eat it’ exploitation strategy of deferring this violent payoff until the villains have already given her poor body a good going over – a tradition that is recreated to a somewhat unhappy extent in Yukio Noda’s film.

The plot line here – which bares more than a passing resemblance to Umberto Lenzi’s excellent poliziotteschi movie ‘Almost Human’ – sees the daughter of an influential politician kidnapped by a gang of feral thugs. Rei is thus extracted from her prison cell and offered a deal by the corrupt cops who want to hush the whole thing up. Her mission: to infiltrate the gang, rescue the girl and kill everyone else, in exchange for her freedom.

And so the scene is set for… well, for about ninety minutes of utter psychosis, to be honest. By far the most violent and misanthropic entry I’ve seen in the ‘pinky violence’ cycle thus far, ‘Red Handcuffs’ seems to blur the boundaries somewhat with the nastier rape/sadism-focused films that began to predominate at studios like Nikkatsu from the mid ‘70s onwards, its promising opening as a hard-boiled crime story swiftly becoming little more than an excuse to fill the screen with as much cruelty and depravity as possible.

The film is full of sex and nudity, absolutely none of it consensual, and in fact nothing approaching a normal human relationship is portrayed at any point. Aside from Sugimoto’s dead-eyed avenger, every character on screen is either a depraved, hideous beast or a voiceless victim - this is pure exploitation movie nihilism, thrilling and repulsive in equal measure.

And I can roll with that to a certain extent - certainly the kind of unpleasantness showcased here is comparable to that seen in the work of Shunya Ito or Norifumi Suzuki, whose films I love – but what nixed my enjoyment of ‘Red Handcuffs’ wasn’t only the lack of human feeling, but also a crucial lack of content. As a drama, the movie fails to really make a connection with the viewer even on the basic rape/revenge level usually favoured in films like this, and as a crime story, it just plain doesn’t work.

Having infiltrated the gang’s hideout and proved her ability as a fearless killer by promptly filleting their sole female member after a botched lesbian rape attempt, why does Rei not only let the rest of them live, but actually collaborate with their plans and give them advice, meekly putting up with them as they turn against her, torture and brutally rape her, then drag her halfway across the country on the run from the cops, as they perpetrate further outrages against innocent civilians…? Why only THEN – in far less salubrious circumstances – does she finally get around to dealing with them..? Because otherwise the story would only have stretched to about forty minutes, presumably. With all tension and narrative drive thus diffused, and with no particular goal to be achieved or point to be made, the film basically just descends (or ascends, depending on your point of view) into a senseless parade of increasingly exaggerated mayhem.

And it pains me to say this, but Miki Sugimoto’s performance scarcely helps matters either. She’s a fantastic presence in a lot of girl-gang focused pinky violence flicks, but here, carrying the whole movie without an ensemble cast to back her up, she just seems a bit out of her depth. Whereas Meiko Kaji saw through the various abuses her character suffers in the ‘Female Prisoner: Scorpion’ films with a look of burning hatred in her eyes, Sugimoto seems unable to move beyond her default expression of vague dissatisfaction, meaning that her character seems to shrug off gang-rape and torture with an attitude of ‘whatever, all part of the job’, re-emerging five minutes later looking completely unscathed. Maybe that’s just the nature of the Zero Woman character, or maybe I’m just mistakenly applying Western sensibilities about such things, but still… not really a nice message to leave people with, y’know?

Not that ‘a nice message’ is something anyone but me would be stupid enough to expect from a movie as thoroughly fucked in the head as ‘Red Handcuffs’, mind you. And with that in mind, I don’t want to do a total burn on the film, because as a pure, visceral experience it’s still pretty damn impressive. Realised with a kind of fast-moving, shot-from-the-hip stylistic flair, and with characteristically brilliant Toei photography still strongly in evidence (if only more Western b-movies from 1974 looked half this good..), the closing car chase / gun battle sequence packs an incredible punch, utilising dutch angles, freeze frames, montage cutting, beserk stunt work and absolutely ridiculous quantities of gore to ensure that, as a piece of low budget action cinema, the last few reels just plain kick ass.

And, horrible, one dimensional characters though they might be, the criminal gang certainly pull their weight as all-purpose avatars of cinematic destruction, fucking, killing or blowing up everything in their path in about ten seconds flat as they plough on relentlessly toward a suicidal showdown with the police. Gang leader Nakahara – I’m not 100% sure on the actor who plays him, but he looks pretty familiar - totally steals the show, his descent into foaming-at-the-mouth homicidal mania played to such comical extremes that he makes Tomas Milian’s equivalent character in ‘Almost Human’ look like a refined man of letters by comparison. The taciturn bad-ass second in command guy – mirror shades, denim cap, evil grin – is great too, spending the first half of the movie whittling female figures out of wood with his hunting knife, and most of the second half holding it to the throat of the kidnap victim as he pumps her full of dope, occasionally pausing to reiterate the fact that he don’t trust no one.

Searching in vain for a bit of depth amid all this mess, there is at least a touch of the same criticism of post-war Western cultural imperialism that can be found in films like Stray Cat Rock: Sex Hunter in evidence in 'Red Handcuffs'. Fleeing to that ubiquitous Japanese movie showdown location, the abandoned US navel base, the gang promptly piss all over an American ‘Urination Prohibited’ sign and invade the privacy of some Japanese people who seem to be living in a American style suburban home, reciting stilted English dialogue for a production of ‘Romeo & Juliet’.

During the finale, Nakahara – a Japanese/American half-breed – is even presented to some extent as the tragic result of cultural miscegenation. “My mother was a prostitute here..”, he remarks to nobody in particular as he cowers in the ruins of the US base, a brief photo montage seeking to show us how his troubled, rootless upbringing inevitably led him to a life of sociopathic criminality. But such blunt commentary seems pretty crass compared to the more complex treatment given to East/West co-dependence in some of the better pinky violence films, and as an attempt to try to invest ‘Red Handcuffs’ with some sort of a point, it’s too little too late.

One has to admire the technical skill, crazed audacity and sheer unrelenting nastiness of ‘Zero Woman: Red Handcuffs’, and if pure, unfiltered exploitation is your bag you’ll probably dig the hell out of it. But, like the psychopathic characters it portrays, there’s an emptiness at the heart of the film that’s cold, man, real cold, and I didn’t really go for that.