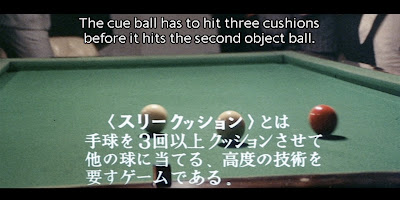 “For a man I love, I’d give up my life
I cried for all the pain and wounds
But nobody has ever seen my tears

Where will I find myself tomorrow?
I’m a wandering Ginza butterfly”

Recently released from a women’s correctional facility, ace poolhall hustler Nami (Meiko Kaji) takes the train back into Tokyo as the slightly freakbeat-tinged title ballad plays over the opening credits. That sounds like the cue (sorry) for some sort of gag about her being ‘framed up’, but.. oh god, let’s just end this sentence now.

She is heading back to her beloved uncle’s poolhall, situated – like just about every other location in the movie – in the shadows of the city’s sprawling, neon-saturated commercial district. All is not well on the streets of Ginza however, and it soon becomes clear that the pillars of the area’s friendly, long-established underworld – Uncle’s poolhall, the female-run hostess club where Nami seeks employment, and ‘Shin the Player’, the happy, generous gang boss who everyone seems to like – are under threat from a new breed of nastier yakuza who are intent on taking over. Can our heroine do her bit to help save the livelihoods of the nice folks to whom she owes so much..? Well, yeah – I mean it wouldn’t make for much of a film if she didn’t give a shit, would it?

Almost entirely lacking in the kind of sleaze and extremity that define pink eiga and yakuza flicks, ‘Wandering Ginza Butterfly’ seems like a deliberate attempt to drag some of those generic tropes into ‘classier’ territory, with decidedly mixed results. The other pinky violence entry I’ve seen from Yamaguchi, ‘Delinquent Girl Boss: Worthless To Confess’, follows a broadly similar pattern, and it’s slightly surprising to learn that the director, who doesn’t exactly seem fond of violent action on the basis of these two films, actually went on to direct Etsuko Shihomi and Sonny Chiba in the hair-raising ‘Sister Street Fighter’ a few years later.

A ridiculously sentimental film, ‘Wandering Ginza Butterfly’ is probably the only one of these movies you’ll find in which acts of selfless kindness and repaid debts of gratitude outweigh cynical double-crosses and nihilistic vengeance, and unfortunately they’re given more screen-time too. Despite the contemporary setting, it’s full of nostalgic nods to Hollywood gangster imagery (did guys in ‘70s Japan really dress like extras from Bugsy Malone?), with mournful accordion laments and Spanish guitar flourishes filling the soundtrack as shots of snow-covered prison windows and wilting roses dissolve into vistas of pastel-coloured neon. You totally won’t believe the scene in which the aforementioned nice gangster is gunned down by the cowardly baddies as he shields the homeless little girl whose flowers he bought everyday from their fire, and even the obligatory nightclub scene has some cheesy Barry Manilow type character crooning about seagulls instead of a rock n’ roll band.

Weak tea for many viewers perhaps, but the exquisite cinematography lends a pleasantly elegiac atmosphere to proceedings (Toei studios seemed to specialise in making even low budget genre films look absolutely stunning in the ‘70s), and, helped along by performances from some fine character actors whom I wish I was able to properly identify, the movie makes for quite enjoyable viewing, even at its dullest moments.

It’s interesting too to see Meiko Kaji stretching her acting muscles in a rare role requires her to move beyond her usual implacable avenger/silent bad-ass moves and actually portray a regular, good-natured sorta person, prone to giggling and apologising and getting all emotional about things. And she’s pretty good at it too, of course. I mean, she’s Meiko Kaji – she’s good at everything.

And thankfully, the film’s relatively ‘refined’ tone doesn’t stand in the way of one or two noteworthy action/exploitation highlights. Chief among these is a scene perhaps unique in all of cinema – the tense table billiards showdown in which Nami must take on the yakuza’s top player in a life-or-death defense of her friends’ property deeds.

Tales of courageous female gamblers and big sporting showdowns are obviously pretty ubiquitous in Japanese genre films, but never have I seen one quite like this. The villains’ shooter - ‘Ryu of the Third Eye’ – is a freaky, stone-faced dude in mirror shades and a black leather shirt(?!), whilst Nami competes in thigh boots and a white mini-dress. The logic of the rather complicated game they’re playing is relayed to us using freeze frames and on-screen captions, and Ryu’s downfall finally comes when his cravings for speed (I think it’s speed anyway – there’s a reference in the subtitles to him being paid in ‘crank’) get the better of him, an effect which is brilliantly achieved by having the actor freak out and make jittery, horror movie faces whilst someone shines Bava-esque yellow lights in his face. Eventually he cracks, and charges across the room, jamming a gigantic syringe into his arm and sighing with relief as the assembled hoods look away in disgust.

Then of course, there’s the blood-soaked vengeance massacre at the end. I mean, I don’t care how classy you wanna try to make your pinky violence/yakuza movie, you’re not gonna get away without the blood-soaked vengeance massacre, and Yamaguchi is at least wise enough to deliver the goods. I seem to recall that Meiko and the goofy on/off love interest guy she’s been hanging around with throughout the film basically have a conversation that goes a bit like “hey, you’re secretly a master-swordswoman, what a coincidence, I’m a disgraced yakuza hitman”, and so they set out to kick some ass.

Blood runs in rivers, lives are ruined, the cops are on their way, and she’s not going to get far in that blood-stained kimono waving a sword around. But vengeance has been served, we’ve had some carnage to keep us satisfied, and all is right with the world – perhaps the most perversely feel-good ending I’ve ever seen to a film in which just about everyone is dead or in jail.

Nami’s adventures continued (perhaps?) in 1972’s beautifully titled ‘Wandering Ginza Butterfly II: She-Cat Gambler’, the unusual use of Western style sequel digits suggesting a sense of cohesion that I’d imagine is probably quite misleading in a world where studios seemed to come up with titles for their movies simply by jamming a load of mad words together with a colon in the middle. Praise be.

Mp3> When the Sun is Gone (Wandering Ginza Butterfly)