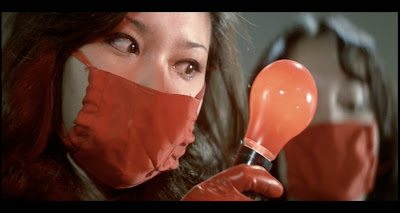 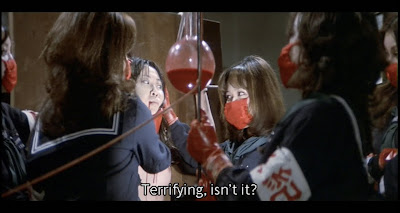 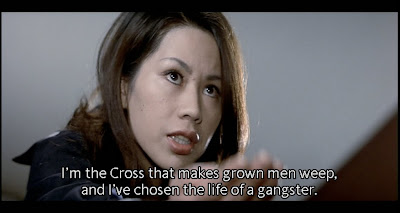 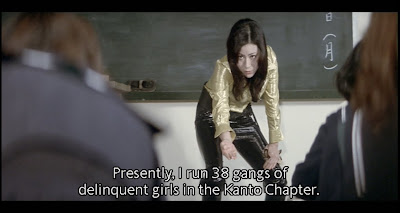 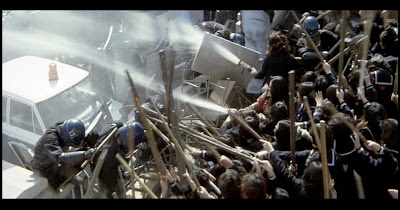 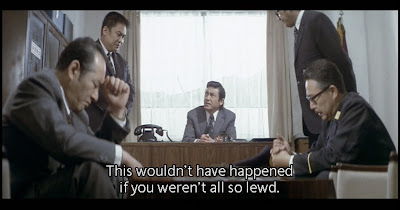 If you’re looking for a demonstration of what makes Japanese exploitation cinema from the early ‘70s so unique, consider the fact that not only did they routinely make movies called things like ‘Terrifying Girls High School: Lynch Law Classroom’, but that, after watching them, you’re often able to sit back and think “yes, on reflection, that would seem to be an entirely appropriate name for this particular film”.

Certainly, renowned maniac Norifumi Suzuki wastes no time in letting us know just how terrifying life at Kanto’s ‘School of Hope for Girls’ is, throwing us straight into an alarming, horror movie-esque sequence that sees the school’s fascistic ‘Disciplinary Committee’ clad in red rubber gloves and surgical masks, using equipment in the science lab to drain the blood from a half-naked victim, calculating how long she’ll be able to remain conscious as she slowly bleeds to death.

Thus we’re introduced to the shock troops of the film’s institutional villains, but frankly the three new transfer students who comprise our heroines are scarcely much less terrifying. Denim-clad Noriko (Miki Sugimoto) – called ‘The Boss with the Cross’ on account of her crucifix pendant - actually manages to get arrested whilst en-route to the school, kicking a cop in the balls as her attempts to steal a car outside the train station. Cowgirl-attired Remi the Razor meanwhile does.. well, exactly what you’d expect really, landing a transfer to Kanto after cutting up a bunch of hooligans in a street brawl, and bisexual Kyoko (“I only do it with guys to wash out the taste, have sex with me once and I’ll drive you insane”, she announces within her first few minutes on-screen) finds herself in hot water after being caught masturbating a truckdriver as he crashes into a police checkpoint.

Plot-wise, ‘Lynch Law Classroom’ quickly establishes itself a variation on yr standard Women In Prison set-up, with a corrupt, authoritarian institution, bungling, ineffectual principal, scheming vice-principal, sadistic guards (in the form of the aforementioned Disciplinary Committee). Gratuitous shower scenes, cat fights and demeaning initiation rituals are all present and correct. Suzuki never lets things trundle along dull WIP rails for long though, concentrating on an astounding array of exploitation set-pieces, taking in lesbian toilet seduction, genital light bulb torture, boob electrocution, and one particularly memorable sequence in which a girl is prevented from going to the toilet until she wets herself in public.

After my review of ‘Zero Woman: Red Handcuffs’ last week, you might anticipate some tut-tutting from this corner, but remarkably, Suzuki just about manages to get away with it all I think. Rather than throwing this stuff around just for the sake of sheer cruelty, he invests it with a kind of grotesque, anarchic humour that renders these scenes freaky and blackly hilarious, rather than merely offensive. At a push, you could maybe even compare Suzuki’s approach here to early John Waters - whilst still unrepentantly prurient and gratuitous, he seems less concerned with providing unwholesome titillation for his audience, and more with simply getting a reaction out of people any way he can. Not content to merely introduce these icky concepts, he seems determined to milk them for as much visceral impact as possible, handheld camera spinning crazily, zooming in for hair-raising close-ups as victims struggle, scream and generally freak-out, often to the accompaniment of incongruous action-scene funk-rock.

Although the film’s universe is pretty sketchy at times (for instance, the way the girls seem to be able to leave the confines of the school when they feel like it and even have access to vehicles, money etc., but nonetheless spend most of their time hanging around in the playground in approved school uniform, is never quite explained), one gets the feeling that any concept of ‘coherence’ was wisely left eating dust as Suzuki simply raced from outrageous sequence to the next, and, rejoicing in their own ridiculousness, the results are really something to behold.

A harder sell for Western viewers perhaps is the film’s middle section, wherein our heroines collaborate with a suave blackmailer guy to try to bring down the school’s top brass by means of a series of ‘honeypot’ stings, wherein the men (who are naturally all lecherous comedy bozos of one kind or another) are coerced into having sex with the pupils, photos and tape recordings of their shameful depredations subsequently ruining their careers. As well as introducing us to the uncomfortable notion that young women don’t really mind being violated by disgusting fat men as long as it serves their eventual goals, these Porkys-goes-to-hell style japes are just a bit predictable and repetitive, causing the otherwise lightning fast pacing to sag somewhat.

Fear not though, sukeban fans, as, as if realising things are starting to drag a bit, Suzuki orders 20 CCs of Reiko Ike, stat, and verily she appears, gate-crashing the classroom on her motorbike as the leader of a chapter of rival Kanto girl gangs with a score to settle with Noriko. As joint queens of the pinky violence era at Toei, it seems to have been written into their contracts that Ike and Sugimoto have to square off for a knife fight in every film they appeared in together, and, well, say what you like… their showdown certainly got me back on-side.

Somewhat surprisingly given his no holds barred approach to sleaze though, Suzuki’s more serious anti-authoritarian agenda creeps up on us with a certain degree of subtlety amid the mayhem. About an hour in, the corrupt political big-shot who acts as the school’s patron takes a look at the school yearbook, and decides to rape Tomoko, the film’s pure-hearted, hard-working innocent girl. Despite what has gone before, this scene and the victim’s subsequent suicide are handled in a surprisingly restrained and harrowing fashion that not only seems to cast a dark reflection back on the more casual instances of sexual degradation we’ve seen earlier in the film, but also conveys an unmistakable feeling of genuine rage against a system that allows the wealthy and powerful to ruin the lives of those beneath them.

As the big-shot prepares for the arrival of his victim, he sits in tranquil ryokan surroundings, reading aloud from a passage in the ‘Compendium of the Law’ praising the Imperial family. Sparing us the gory details of the assault itself, Suzuki’s camera subsequently pulls away, zeroing in instead on the book, which has fallen open on a page detailing the sentencing of rapists.

Tomoko’s subsequent death (she hangs herself in a classroom) signals a definite shift in the film’s tone, as gross-out exploitation is increasingly sidelined in favour of a more tangible attack on institutional hypocrisy. Angry and disgusted at their friend’s fate, the pupils hold a vigil around her corpse and, led by Noriko, Remi and Kyoko, instigate a full scale insurrection against the powers that be, destroying the campus in a fit of rage, barricading the entrance gates and attacking riot police with rocks, water cannons and wooden clubs – a breath-taking outburst of anarchy, like some crazed Japanese exploitation take on Lindsay Anderson’s ‘If..’.

In the closing minutes of the riot, a Japanese flag burns on an overturned limousine as Reiko Ike, clad in a red mini-dress, beats the crap out of a policeman with a giant wooden pole, and, finally overwhelmed, the girls laugh defiantly, sharing gestures of solidarity as they’re carted off to an even sterner detention centre. Hell yeah! Right on, comrades! Every school you trash takes us one step closer to a world in which delinquent gang girls can go about their business unmolested by weaselly comic relief men with Hitler moustaches. And that, I think, is a cause we can all get behind.

I suppose it should go without saying by this point that ‘Terrifying Girls High School: Lynch Law Classroom’ comes with a ‘NOT FOR THE EASILY OFFENDED’ warning in ten foot high neon letters, but beyond that, it’s an unruly, punk-ass masterpiece that anyone with a taste for the crazier end of world cinema owes it to themselves to check out.