The Mirror of Dionysos
by Ralph Comer 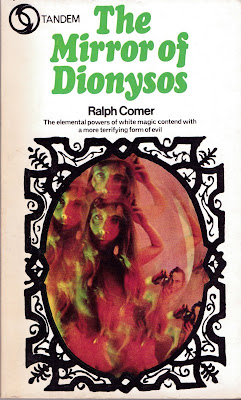 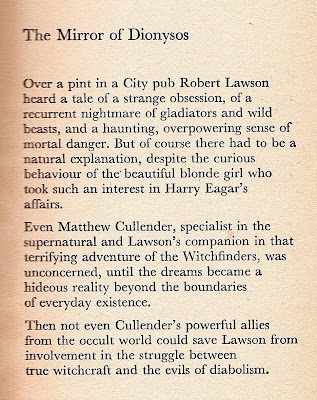 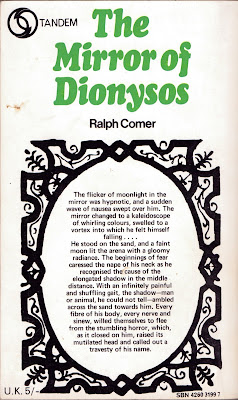 Unusually for one of the forgotten paperbacks I feature here, I’m actually halfway through reading ‘The Mirror of Dionysos’. When I glanced at the first page and saw that the book opens with the protagonist getting into a sticky situation over Dunstable in his state-of-the-art glider, I couldn’t resist taking the plunge.

Reading on, it soon becomes clear that Ralph Comer is an enthusiastic proponent of what you might call the ‘info dump’ style of writing - bulking up the word count by merrily throwing in incidental digressions on a wide variety of subjects as the mood takes him. In the opening chapters alone, Comer holds forth on the ancient history of the Aylesbury and St Albans, the lifestyles of contemporary Fleet Street journalists, recent developments in vertical take-off rocket technology, Roman history, Chinese philosophy and the author’s distaste for family-orientated chain restaurants. Rather than making things meandering and dull as you might expect though, this technique actually works quite well in maintaining a level of constant, ambient interest – rather like flicking through old Sunday supplements in a doctor’s waiting room.

Once it gets going, the story itself has a reassuringly crazy sort of feel to it, beginning with the case of a man who appears to have been placed under a curse by some sort of coven of neo-Nazi, ancient Rome-obsessed witches (look forward to the big reveal about what makes them tick). Basically, every time this unfortunate fellow falls asleep, he finds himself inhabiting the body of a disgraced Roman gladiator who is about to enter the arena to be torn apart by wild animals – the resulting wounds manifesting on the man’s ‘real’ body when he awakes. Discovering that any items placed in contact with the victim’s body will also be ‘transported’ back in time, our heroes come up with a brilliant plan to send him back armed with several smoke bombs and an experimental jetpack to aid him in his escape!

Although published in ’69, Comer’s book has an exquisitely ‘70s feel to it, painting a world populated by selfish career-men who refer to each other by their surnames as they zoom around in Triumph Spitfires, engaging in hanky panky (“..and before I knew it I was giving her a right going over..”) and ordering large brandies in Charing Cross pubs. (“Cullender had a lager and lime.”, notes one short but perfectly formed sentence.) So far, there’s been one scene set in a subterranean hippie club where attendees lay around in a stupor staring at flashing lights 24 hours a day, and another at a swanky fashion industry party, featuring a ‘pop group’ floating in a perspex box and ‘dollybirds’ dishing out champagne.

Far from a great work of literature, ‘The Mirror of Dionysos’ would nonetheless have made for an absolutely cracking, action-packed horror movie along the lines of ‘Scream and Scream Again’ or ‘Dracula AD 1972’. Dashing photojournalist Robert Lawson could have played by somebody like Jon Finch or Ray Lovelock, and Christopher Lee would have been an absolute shoe-in for the obsequious and overbearing occult expert Harry Cullender. Maybe they could have got Valerie Leon or Caroline Munro as interfering, witchy next door neighbour Isadora Martin? Not that I’ve got to the bit where she’s revealed to be a witch yet, but OF COURSE SHE’S A WITCH.

It looks as if this is the last of three Lawson & Cullender novels Comer wrote between ’68 and ’69 (the other two are ‘The Witchfinders’ and ‘To Dream of Evil’), and it’s a shame he didn’t get around to doing some more really – regardless of leaden prose, rampant chauvinism and Reader’s Digest-level research, ‘The Mirror of Dionysos’ is a hoot.

I love your reviews. Your writing is inspiring. I really need to put more effort into the ones I do. Keep 'em coming.

Not sure there's been anything very inspiring about this blog's minimal content in the past month or two, but nice of you to say so all the same.

Thank you! Thankyou!Thankyou! I shall be searching for this book as my Christmas gift!!! Awesommme!!! Xo