I’ve been watching a lot of films thus far this year, so I thought that for a bit of a change of pace from the full-length reviews, I’d do a few posts catching up on some of the more interesting flicks I’ve seen recently that I’ve lacked either the time or inclination to give the ‘full treatment’ to. Hope that’s ok with everybody…? No candles and no devil to be seen in this rather grim Spanish horror, which essentially plays out as a variation on the ol’ ‘Beast in the Cellar’ / stuck-up murderous spinsters yarn.

Exemplifying that peculiarly wonderful ‘rusty’ look that Spanish horror movies specialised in through the ‘70s, ‘Candle..’ is also perhaps the most direct of the various genre movies that saw fit to comment on the explosion of tourist trade in Spain and the negative effect it had on the local culture during that decade, via the sordid tale of a pair of hysterically repressed guesthouse proprietors so appalled by the loose morals of the foreign hussies flooding their establishment that they’re forced to take divine justice into their own hands.

There are some extremely visceral and uncomfortable moments to enjoy(?) here, and a cool (unintentionally?) ambiguous ending, but whilst ‘Candle..’ may be a god-send for anyone planning a thesis on the underlying themes of Spanish horror, that sadly doesn’t save it from also being a profoundly unenjoyable experience for the casual viewer, thanks to its excruciatingly drawn out plotting, inconsistent tone, grimy locations, underlying misogyny and sub-H.G. Lewis characterisation. (I particularly liked the ‘slut’ character, who seems to dedicate her every waking moment to furthering the pursuit of sluttishness, at the expense of all other personality traits.)

Like a number of Jess Franco films from the same period, director Martin (who also helmed the fantastic ‘Horror Express’) seems to have a bee in his bonnet about religious hypocrisy, specifically in regard to Franco-era Spain (uh, the OTHER Franco I mean, obviously). But, lacking the intellect or subtlety of a Bunuel or Pasolini, it all emerges here as fairly tiresome stuff. Yes, religious people can be evil and abusive and fucked up behind closed doors – WE GET IT, let’s move on now. Word to the filmmakers for at least trying to do something a bit different and tie their on-screen nasties up with real world issues, but basically one to file under NO FUN. 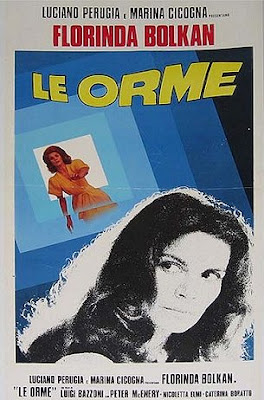 Making its home video debut last year courtesy of the Shameless label, Luigi Bazzoni’s ‘Le Orme’ is a deeply obscure Italian oddity, notable for adopting an an aesthetic so nebulous that, despite nominally existing as a genre film, it effectively defies categorisation simply through being too uneventful to really commit to any of the available options. Is it horror? Giallo? Sci-fi? Arthouse? Well… none of the above really, despite hinting at all four from time to time.

Seemingly an attempt at a kind of vague psychological thriller dealing with the ambiguity of unreliable memory, ‘Footprints’ follows a woman (Florinda Bolkan from ‘Lizard in a Woman’s Skin’) whose attempt to account for several days of total memory loss leads her to an entropic island resort, where residents seem to know her by a different name and recall her getting up to kinds of inexplicable behaviour that seems to be pointing toward some unguessable secret life. Probably the strangest aspect of the film is the inclusion of a series of eerie, slow-motion dream sequences portraying an astronaut dying of asphyxiation on the lunar surface, whilst a uniformed Klaus Kinski sits in a cramped looking mission control, yelling inexplicable commands into a microphone.

Sounds great, doesn’t it? Unfortunately though, the reality of the film is for the most part a tedious exercise in second-hand style and deliberate mystification that literally goes nowhere. There are a few nice shots and creepy moments, and the washed out ‘stored-in-the-attic-for-30-years’ look of Shameless’s print actually meshes very well with the hazy cinematography of Vittorio Storaro to create a real dreamy, nostalgic feel, but sadly none of it really amounts to much, as proceedings drag on interminably, any sense of momentum or purpose long since departed.

Viewers patiently waiting for some connection to be revealed between the memory loss plotline and the outer-space footage will be sorely disappointed as the film veers more toward a predictable exercise in pop-psychological borderline-giallo hoo-hah in the second half, failing to really expand on any of its stylistic eccentricities or suggestions of hidden depth. I’m unfamiliar with the ‘La Orme’s production circumstances, but basically I wouldn’t be surprised if Bazzoni simply took some footage from an aborted sci-fi movie and used it to liven up the rather boring psychological mystery flick he was working on.

I guess Euro-cult completists might get a kick out of this one out simply for its obscurity, general strangeness and applaudable disregard for genre convention, but the public at large would be well-advised to keep their distance.

Supposedly telling the tale of an innocent girl transformed into a murderous seductress by Satanic powers, the makers of this barrel-scraping Euro-sleaze item actually seem rather more concerned with following the story of some shlubby guy with a moustache as he wonders around his castle giving everybody a hard time. Sleazy without being fun, inept without being charming, incoherent without being weird, gross without being shocking, this kind of gothic softcore romp must have seemed impossibly hackneyed by the time it limped onto the market in ’82, and making it through the full 74 minutes proved a pretty thankless task, I’m sorry to say.

In a world where so many potentially gifted directors have trouble getting their projects off the ground, it’s always dispiriting to see a commercially backed picture helmed by a guy whose vision seems to extend to filming just about enough footage of sweaty faces, boobs and people standing still to scrape minimum feature length in the editing room, and some of the sheer laziness on display here is shocking, even by euro-trash standards.

Casting around for positive things to say, they did at least pick a really nifty castle to shoot in – even though I’m not sure the interiors match the exterior shots, I’m sure I’ve seen both before in other Italian horror flicks that I can’t quite place. By far the best thing about ‘Satan’s Baby Doll’ though is an absolutely kick-ass soundtrack by one Nico Catanese - 64 slices of Italian cheese in the noble tradition, reminding us of all the cool stuff in the country’s b-cinema legacy that the film itself so sadly fails to live up to.

Watching it sober was definitely a mistake I think. Under the right circumstances – chemically altered ones preferably - I can maybe see this flick taking on its own kind of lurid, hypnotic grandeur… but I wouldn’t count on it. A pretty rum do all round really – I’d be tempted to say ‘this really is the pits’, but one of the questionable joys of watching weird horror movies is that there are *always* further depths to be plumbed. (Deep sigh.) Bring ‘em on! 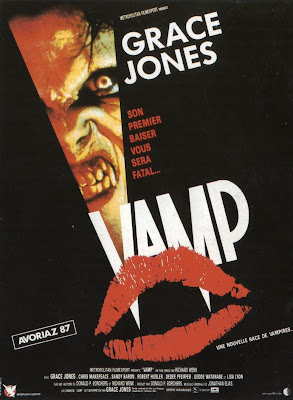 Well I don’t want this to be an ENTIRELY negative post, so having given a few of Shameless’s budget titles a kicking above [solely on the basis of the films themselves I hasten to add, I’ve got no problem with their presentation or general objectives], I thought I’d at least weigh in with some positive words for their sister label Arrow’s recent horror releases, beginning with this delightful neon timebomb from little-known writer/director Richard Wenk.

If you know anything at all about this film, it’s probably that it’s the one in which Grace Jones plays a vampire stripper, and indeed her hyper-stylised, neon-enhanced dance routine is an I-can’t-believe-I’m-actually-seeing-this highlight - a Liquid Sky level testament to high 80s splendour. Subsequently, Jones’ role is the film is rather limited, portraying the ravenous, animalistic queen of a brood of strip club vampires, but needless to say, her physical presence and astonishing appearance makes her a truly threatening figure throughout.

That aside though, there’s no shortage of other stuff to enjoy in ‘Vamp’, from a sharp script full of genuine laughs to some great action scenes and plenty of endearing inter-character shenanigans and such. But what really sets it up for horror-fan immortality (aside from Grace) is the truly spectacular production design. Eschewing any hint of realism in it’s creation of a ‘gritty’ urban environment, the film instead opts for a feast of extreme, Bava-esque lighting effects, filling the screen with over-saturated red and green, mixing it all up with ample neon, dry ice etc for a unique neo-gothic comic book look that’s just to die for.

(Oh, and for those keeping track of such things, the benign influence of ‘Vamp’ on the plotline of Rodriquez and Tarantino’s ‘From Dusk Til Dawn’ a decade or so later should be self-evident.)

Writing these capsule reviews, it’s a challenge not to just end each positive one with a variation on a cheesy, IMDB-esque ‘GREAT MOVIE, THUMBS UP’, but, uh: great movie, thumbs up.

Great write-up! I've always loved this movie and I've been meaning to pick it up. Haven't seen it in a while, so my reintroduction to it should be damn good fun. Thanks for reminding me on this one and keep up the good work.