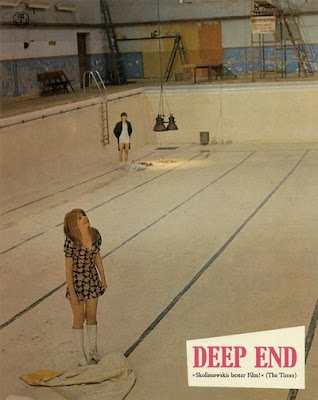 It’s often easy for me to moan about how little relevance state-sponsored culture in the UK has to my life, but all that’s put nicely into perspective when the BFI do something great like this: take one of my favourite little-known/underappreciated films, one that I’ve previously been enjoying via an impossibly rough recorded-off-TV bootleg, and make a brand new digitally restored print of it to tour ‘round UK cinemas prior to a new DVD release.

I tried to write a review of Jerzy Skolimowski’s ‘Deep End’ for this site almost exactly a year ago, but my efforts collapsed into a kind of epic, incoherent failure to really express what I get out of the film, and thus got shelved. Needless to say, it’s really good.

Presumably timed to vaguely coincide with the release of Skolimowski’s first film in donkey’s years, ‘An Essential Killing’, the new version of ‘Deep End’ will make what I presume to be it’s debut via the BFI’s always brilliant Flipside strand on May 4th (sadly I can’t make it), and will subsequently be shown a whole bunch at the NFT and elsewhere.

Sorry if that sounded a bit too much like a press release – just wanted to give anyone who might be interested a heads up, and state that I’m pretty damn thrilled about the opportunity to see this film on the big screen, with discernable detail, proper colours, no tenth gen fuzz, proper sound etc. Can’t wait. So yay for the BFI, and a predictable boo to the recent funding cuts that will presumably see some other projects such as this consigned to the cooler over the next few years.

I'm excited about the dual edition DVD/Blu Ray release of this film, a title long overdue its moment in the sun. I hope Skolimowski's later effort THE SHOUT gets similar treatment too.

Yes, definitely! I'd really like to see 'The Shout' - sounds really interesting, and I might even get over my dislike of Vincent Gallo and give 'Essential Killing' a look if it's still showing anywhere...