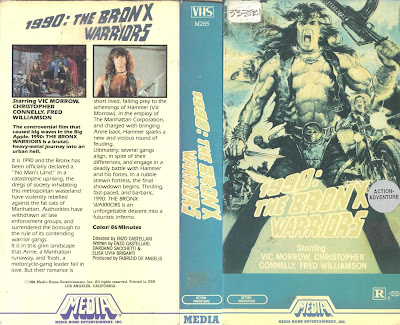 Just a quick plug, in case anyone's interested: the webzine Platform did an interview with me last month about my weirdo punk band thing, and they were nice enough to ask me to write a follow up piece about some of my favourite beserk/trashy '80s movies.

As has frequently been pointed out (most recently/persuasively by the endlessly wonderful House of Self-Indulgence blog), not every movie made during the 1980s can truly be claimed as an '80s MOVIE. A slippery distinction, but y'know what I mean. Naturally it is the latter category that I chose to concentrate on. I also tried to pick some titles that aren't already gigantic cult movie touchstones (hence no "Repo Man", no "Liquid Sky", no "Return of the Living Dead" etc), and, with the exception of "Times Square", I've veered more towards the crazy-ass exploitation side of things gather than going for, uh... actual great, life-changing films and so forth. Also a slippery distinction, and one I would usually seek to avoid on this site, but... practicality, y'know?

My final short-list boiled down to: Fulci's "The Black Cat", "Times Square", "Night of the Comet", "Savage Streets", "Vicious Lips", "Demons" and "1990: The Bronx Warriors", and my enthusiastic 200 word summation of each can be found here: http://readplatform.com/space-age-thrills-2/.
Posted by Ben at 12:06

I still haven't seen Demons... the cover box freaked me out when I was a kid, and I have been avoiding it ever since.

For the record, the box for GHOULIES had the same effect.

Maybe I was just kind of a wuss.

Some interesting recommends there Ben, but... a review of Demons that doesn't lavish praise upon Bobby Rhodes as the epitome of cool (and male chauvinist pig of course, but we can overlook that when he's the only one to keep his head as demons are ripping the others to bits)!!!? To quote Tommy Wiseau 'what planet are you on man' ;-)

Is he the pimp character? Yeah, what a nutty OTT stereotype, but I guess you know as soon as he's introduced that he's gonna get to kick some ass later on...

Kev: yeah, the poster for Demons is scarier than the movie probably - I love the foreboding tagline.

I know I've mentioned this before, but... Street Trash!

I think it was simultaneously cleaner and more weirdly apolitical/amoral than I expected, but also more insanely grotesque and more laugh out loud funny... lot of different, conflicting elements to, er, digest, but hopefully I'll find time to do a review sooner or later!