Teens on the Rampage!
A JD Paperback Special

I recently acquired a stash (well, if three can be said to constitute a ‘stash’) of classic Juvenile Delinquent paperbacks, so, uh, here goes…

The first one I had a bash at is “Savage Delinquents” by Alan Bennett (not that Alan Bennett, I’m assuming), copyrighted 1959, although this awesome looking McFadden Books edition dates from 1968. 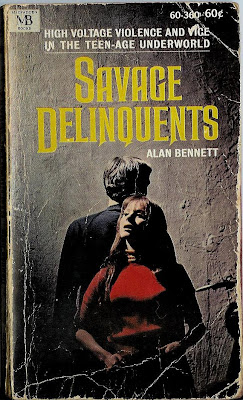 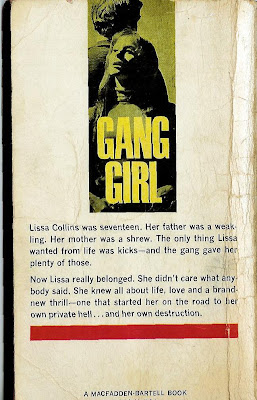 I love the moody photo-cover and the font used on the title, and that “GANG GIRL” panel on the back is a stone-cold classic, but despite the enthusiastic seller’s blurb scribbled on the inside cover I’m afraid I found “Savage Delinquents” pretty thin gravy – a by-the-numbers tale of a good girl who goes off the rails cos her parents don’t understand her. A tough guy called ‘Bull’ takes her to ‘the club’, an ahead-of-its-time DIY community space (that’s probably not the idea Mr Bennett intended to convey) in which bad teens give in to their untamed desires, dancing to modern jazz records and indulging in some PG-rated flirting… until midnight that is, when a guy turns up with a box of ‘tea sticks’ to distribute (it’s free until they jack up the price!). Then it’s flashing colours and feelings of ‘ecstasy’ all the way.

This being some strictly “Reefer Madness” style jive, naturally it’s about a week before Lissa is stalking the streets, a wreck of her former self, prepared to sell out her best friend for one sniff of the evil weed. 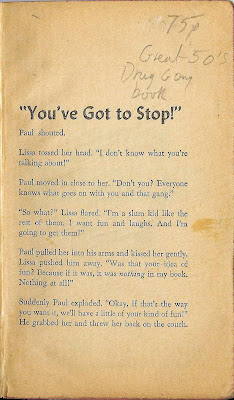 Stodgy, uninspired prose wrapped around a plot consisting entirely of reheated cliché, I stuck it out for a few more chapters than turned my attention elsewhere. I’m no advocate of teen drug abuse (well, not very often anyway), but the complete failure shown by writers like Bennett to even try to investigate or understand the social, economic or practical realities of drug usage always strikes me as kinda depressing.

Much more enjoyable overall was “The Violent Ones”, edited by Brant House, here presented as a 1958 British edition from Digit Books (the classic cover to the American edition from Ace can be seen here). 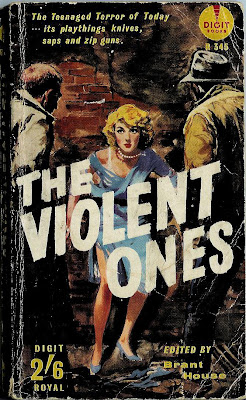 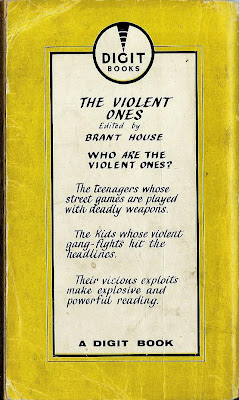 “The Violent Ones” is a short story anthology, not that you’d know it from the cover blurb or the lack of any contents page, and actually contains some really killer nuggets of hard-boiled prose from writers like Evan Hunter, Hal Ellson and Murray Wolf, leavened out with a few absolute stinkers from Robert Turner and a rather out of place Robert Silverberg.

The subject matter of the stories is generic and repetitive in the extreme, establishing a formula for the JD story almost as archetypal as that of the western, with the protagonists’ life divided between weak/abusive/misunderstanding parents stuck in the cramped inner city apartment, the ‘good’, trusting girlfriend at the soda foundation, the ‘bad’ kids on the corner, the rival gang from the next block, and so forth.

What they lack in originality though, the best of these stories more than make up for in guts, with Hunter’s “See Him Die” and Wolf’s “Knives in the Street” in particular standing out as tight, violent urban tragedies, vaguely reminiscent of Chester Himes, or of one of my favourites pieces of ‘modern pulp’ writing, Jack Womack’s post-apocalyptic JD update “Random Acts of Senseless Violence”. Highly recommended.

The aforementioned Hal Ellson, author of The Knife, could make a pretty good claim to being the king of JD literature, having seemingly specialised in the genre throughout his career. But by far his best known work is 1952’s “Tomboy”, which had been continuously in print in the UK for twenty years when this 19th printing from Corgi hit the shelves with a new cover design in ’72; 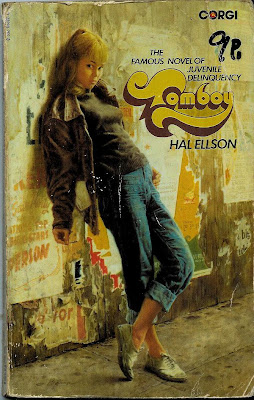 From a distance, this cover could be mistaken for a photo, but it’s actually a painting (uncredited, natch). The early ‘70s date is also given away I think by the exaggerated retro ‘50s font used for the title – a motif that seems to turn up on tons of music/youth culture books through the early/mid ‘70s, perhaps prefiguring the mainstream explosion of baby-boomer teen nostalgia that emerged toward the end of that decade with American Graffiti, Happy Days, Grease et al? 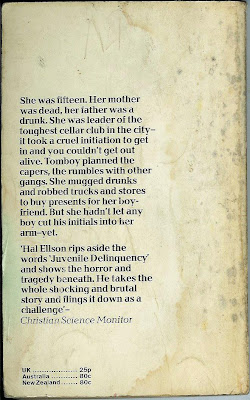 Like previous editions I’m assuming, this “Tomboy” comes complete with an introduction by Dr. Fredric Wertham, the insufferable jackass best known for his 1954 book “The Seduction of the Innocent” and the subsequent moralist witch-hunt that almost destroyed the American comic book industry. Wertham thinks that Ellson’s books bring “truth” to the literature of juvenile delinquency, which we can pretty much take as a guarantee that they do anything but, and indeed, “Tomboy” takes place in a phantasmagorical pulp netherworld that bears very little resemblance to life in 1952, 1972 or any time in between. 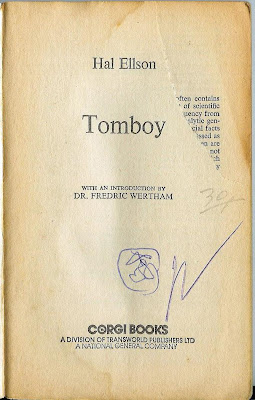 Like “The Knife” or his stories in “The Violent Ones”, "Tomboy" is a great bit of vivid, sordid, slightly unhinged pulp, with a style that easily leapfrogs the boilerplate storyline. Any deep social relevance is entirely coincidental as Ellson gives us a rousing tale of a chain-smoking, chain-wielding, sailor’s cap clad “dirty blonde” fifteen year old notably NOT depicted on the above cover, although this US Bantam edition gets a little closer to the action; 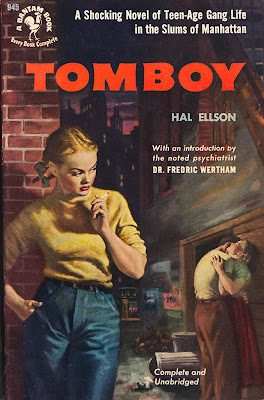