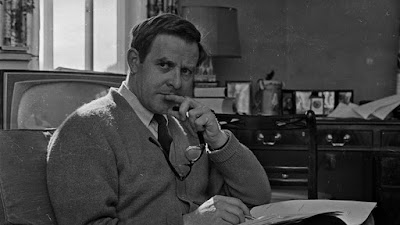 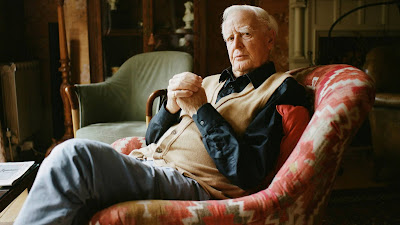 To my shame, I’ve been a late-comer to John le Carré’s work. Scanning over his books (which have always been gifted by their publishers with singularly boring cover designs) in innumerable charity shops through my youth, I’d long assumed that they must be dry, procedural, unappealingly nationalistic affairs - the kind of spy novels read by grey-faced, commuter-belt dads, padded out with tedious detail about the firing rate of sniper rifles, the mechanics of phone-tapping and the precise dimensions of expensive suitcases. Not my bag man, especially in those relatively hopeful, paranoia-free years which followed the fall of the Berlin Wall.

To his eternal credit, it was my brother who convinced me to think again, passing on a copy of ‘The Spy Who Came in from the Cold’ (1963), and solemnly instructing me that I needed to read it. He was right - I did need to read it. Not simply one of the best cold war thrillers, I’d class it as one of the best novels written in the second half of the 20th century, period.

Reportedly composed by the author in a kind of frantic fugue in the months following the Cuban Missile Crisis, ‘The Spy Who..’ turns the reader’s expectations of a ‘spy story’ inside out, obscuring the methodology and purported grander purpose of espionage and focusing instead upon the fragmenting identity of its protagonist and the ugly human cost of low level cold war brinksmanship.

Building to a suitably bleak crescendo of morally bankrupt existential absurdity, the novel is a match for any of Graham Greene’s tonally similar masterpieces, and the widespread acclaim with which it was received could easily have seen le Carré undertaking a similar leap toward the realm of literary fiction. The fact that he chose not to, instead remaining firmly ensconced within the more comfortable terrain of genre / ‘popular’ fiction across the decades as he eyed the critical establishment with suspicion, very much counts in his favour, I feel.

Though it veers a little more toward the kind of procedural detail I was initially dreading, ‘The Looking Glass War’ (1966) is a solid follow up, doubling down more directly on the earlier novel’s core theme of men and women being left to die ‘in the field’, solely in order to satisfy the petty, bureaucratic jealousies of London’s administrative hierarchies.

With those two under my belt, I took a step backwards and read le Carré’s second novel, ‘A Murder of Quality’ (1962). Noting that the author’s famed intelligence agent George Smiley was the protagonist, and aware of le Carré’s low key approach to his art, I began the book convinced that their must be some sort of nefarious international conspiracy underlying what initially seemed like a fairly benign whodunit, remaining alert for hidden inferences and code words which would blow the whole thing wide open.

At one point, I recall seizing upon a passing reference to a character’s wife collecting donations for an Eastern European refugee charity, thinking, “aha, finally, that must be the connection”, only to realise in the last few pages that I actually had just been reading the kind of innocuous Home Counties murder mystery which Inspector Morse might have sorted out of a Sunday evening a few decades later. Ho hum.

Back on safer ground, my next (and to date most recent) foray into le Carré’s world was what most people would probably consider his second masterpiece, 1974’s ‘Tinker Tailor Soldier Spy’. In stark contrast to his ‘60s spy novels, this labyrinthine tale of George Smiley’s quest to identify the Soviet double-agent operating within the highest echelons of British intelligence is at heart a genre potboiler, complete with clearly defined goodies and baddies, as the absent spectres of Control and Karla loom like a sainted elder and a red devil over the chessboard upon which le Carré’s grey-faced cast of inscrutable, tormented middle-aged men endlessly circle one another, seeking a momentary advantage.

You would not immediately grok this however from the dense lexicon of ministerial hierarchies, committee membership lists, coded filing systems and obscurely named internal departments through which the author tells his tale. I’ll be honest, the pointed avoidance of sensationalism or directly expressed emotion which characterises le Carré’s quote-unquote ‘mature’ style can take some getting used to.

If the idea of a thriller written by an administrator doesn’t sound like too much of an oxymoron though, ‘Tinker Tailor..’ embodies this idea beautifully, and as you allow yourself to sink into its quiet, judicious world of painstaking information gathering, and let the full scope and resonance of the author’s vision become clear, the eventual impact is staggering.

(Well I remember sitting on a long haul flight a couple of years back, taking a brief break from reading and realising that I’d become breathlessly excited at the prospect of Smiley managing to remove a confidential file from a reading room without the necessary permission.)

Ideally I think, ‘Tinker Tailor..’ should probably be read in conjunction with watching the 1978 BBC TV series, directed by John Irvin - a brilliant adaptation which retains the core structure, characters and feel of the novel, whilst also finding time to depict some of the more conventionally exciting, action-packed diversions which le Carré decorously left off-page.

As much as tributes have naturally concentrated upon the plotting and realism of le Carré’s novels though, I’d also like to highlight what a fantastic prose stylist he was. Though his characters may initially seem like little more than surnames wearing old school ties, his knack for humanising and differentiating them through seemingly casual asides or tantalising suggestions of hidden depths, is often extraordinary.

Each one of the le Carré novels I’ve read thus far has contained indelible, seemingly random, references and descriptions which stay with me long after I’ve read them - from the protagonist of ‘The Looking Glass War’ somehow finding malign intent in a child’s toy as he idles at an airport en-route to his fatal mission, to the description in ‘Tinker Tailor..’ of a small-minded finishing school headmaster “beating the flanks of his dachshund like a drum” as he casts uncharitable aspersions in the direction of a supply teacher whose actual achievements and experiences he couldn’t even begin to imagine, or to Smiley’s instant dismissal of a rumour that Control has been seen alive and well in North Africa on the basis that “the only place he ever felt at home was Surrey, or the Lords Cricket Ground”.

Whatever subject turned his attention to, le Carré was, above all else, an exceptionally gifted writer, and gradually acquainting myself with the rest of his extensive oeuvre is a task I’ve been greatly looking forward to over the coming years and decades.

On a personal note meanwhile (as if any of this has been anything but), I also can’t help but mention how much I’ve appreciated le Carré’s re-emergence as a public figure in the 21st century. Interviews such as those featured in the excellent 2000 documentary ‘The Secret Centre’ (which sadly doesn’t seem to be available to view on line, but can be found as an extra on the recent blu-ray reissue of the ‘Tinker, Tailor..’ series) left me with an impression of le Carré as a wise, compassionate and clear-headed thinker, and it has subsequently been gratifying to discover that, whilst a lifetime of opposition to communism lent him a distrust of the political left which I do not necessarily share, his views on many subjects closely echoed my own, and he expressed them with a directness and eloquence which I greatly appreciate. [In addition to the link above, I’d also refer you to the concluding paragraphs of this BBC online obituary.]

What le Carré referred to as “[his] England” is, I would hope, mine too, and as our nation continues to toil under the yoke of assorted bullies, bastards and dead-eyed incompetents, the loss of one of the all-too-few affirming flames who are able to make me feel proud, rather than ashamed, of my nationality has been especially keenly felt this week. RIP old chap - you will be much missed.
Posted by Ben at 00:06