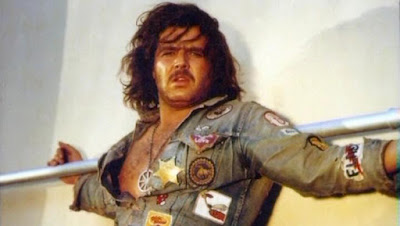 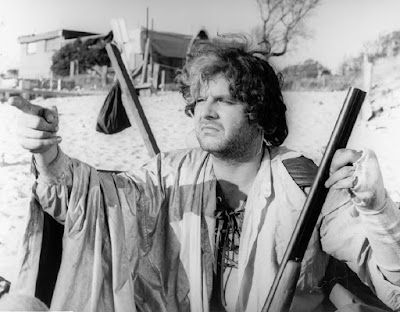 And so the bad news continues to roll in. Just a few weeks after Sandy Harbutt passed away, it’s time to say farewell to his ‘Stone’ co-star and the preeminent bad-ass of ’70s Australian cinema, Hugh Keays-Byrne.

Born in India to English parents, Keays-Byrne was raised in the UK and honed his acting chops working for the Royal Shakespeare Company from 1968 to 72. After touring Australia with a production of ‘A Midsummer Night’s Dream’ in ’73, he decided to stick around and try his luck, and the rest, as they say, is history. His role as the freaked-out Toad in ‘Stone’ was followed in quick succession by Brian Trenchard-Smith’s ‘The Man From Hong-Kong’ in ’75, Philippe Mora’s ‘Mad Dog Morgan’ in ’76, and, eventually of course, his unforgettable turn as The Toecutter in George Miller’s ‘Mad Max’ in ’79.

A wildly charismatic, powerhouse performer whose screen persona combined booming, Shaekspearean diction with feral outback grit, Keays-Byrne is fantastic in every film I’ve ever seen him in. In particular, he totally kicks ass (sometimes literally) as the rogue, long-haired cop in ‘The Man from Hong-Kong’, completely stealing the show from Wang Yu and George Lazenby (if not necessarily from frequent co-star Roger Ward, playing his more laconic partner).

By the time we get to 2015’s ‘Mad Max: Fury Road’, well, much of the time it could have been anyone under all that get-up he wore for the Immortan Joe role, but it was nice to at least know that he was buried in there somewhere, and to appreciate some of menacing, stentorian gravitas he still managed to put across - his Shakespearean roots showing through to the end.

He always seemed like a really great guy in interviews too (I particularly recommend the Mad Max episode of The Projection Booth in that regard), and will no doubt be much missed by many. RIP.