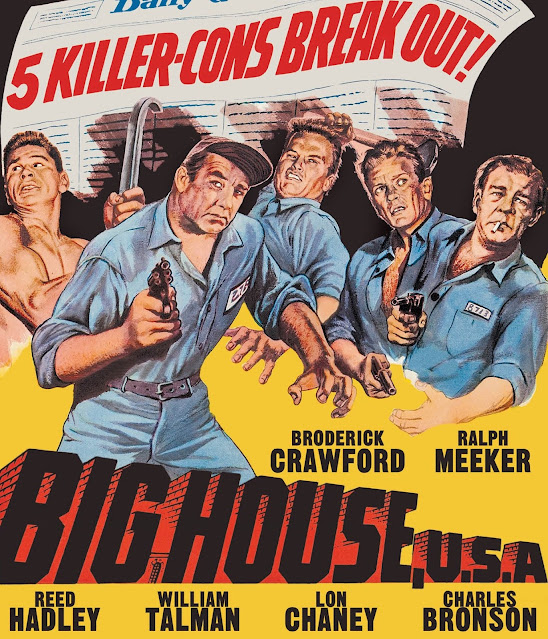 With a plot that takes in extortion, kidnapping, blackmail and child murder whilst offering up an utterly unsympathetic, morally reprehensible protagonist and setting him against a supporting cast of equally loathsome, cut-throats heavies, John C. Higgins’ screenplay for ‘Big House U.S.A.’ (from a story by George Slavin and the supremely named George George) seems to scream its film noir credentials to the rafters. Director Howard W. Koch and producer Aubrey Schenck’s presentation of this grim subject matter however..? Not quite so much. (1)

Indeed, I was rather taken aback as the film begins by taking us to some kind of summer camp in the picturesque mountains of Colorado, where a plucky young lad wants to compete against the other boys in running races, despite his chronic asthma. After descending into a coughing fit and being threatened with a big needle by the camp’s nurse, the humiliated kid runs away into the wilderness, and search parties are dispatched to find him.

In unhurried fashion, we are subsequently introduced to the steadfast local sheriff, to the missing boy’s panicked (and apparently very rich) father, and to assorted forest rangers, cops and such. Meanwhile, the tearful lad is discovered hiding on the undergrowth by a wandering fisherman, who would seem fairly benevolent at first, were it not for the fact that he’s played by Ralph Meeker of ‘Kiss Me Deadly’ fame - an actor who, rather uniquely, combines the energy and good looks of a traditional Hollywood leading man with an aura of sheer malevolence which clearly marks him out as a grade-A piece of shit.

And, thus he proves to be; instead of alerting the authorities, Meeker leaves the boy imprisoned in a remote/abandoned lookout station whilst he calls up Panicked Dad and gives him the low-end on what appears to be a pre-meditated kidnapping scheme. This in turn prompts the introduction of a smug FBI agent (Reed Hadley), who arrives in good time to drone on and on about the fool-proof, scientific methods utilised by the feds to deal with such cases.

Complete with all the thrills and spills of an episode of ‘Little House on the Prairie’, this kidnapping plotline proceeds to plod along for ten minutes, then twenty, then eventually a full half hour, as I gradually found myself wondering whether the good folks at Kino Lorber had mixed up the reels with some other movie when they created their transfer of this film. Where was this “Big House U.S.A.” we’d been promised? And what of the incredible rogue’s gallery of b-movie sluggers promised by the poster? When are they all going to to factor into things?

Well, our journey toward them eventually gets underway when, in the first of several moments of startlingly callous brutality which punctuate the movie, the kidnapped kid takes a fall and dies whilst trying to escape his captor. Without so much as a second thought, Meeker picks up the kid’s body and hurls it over the nearest cliff into the rushing river far below.

After this shocker, things understandably take a darker turn, as Meeker is caught red-handed attempting to leave the National Park after retrieving (and secretly stashing away) the ransom money provided by the father. He tells the feds that he never actually laid eyes on the kid and was merely taking advantage of the situation by shaking down the dad for some quick dough, and, unable to prove a definite connection between Meeker and the kid’s disappearance, the cops have no choice but to allow the faux-fisherman - who has earned himself the tabloid nickname “The Ice Man” for his both determination to stick to his story and his refusal to disclose the location of his ill-gotten gains - to cop a plea on an extortion charge.

Thus we get to see Meeker merrily shipping out to spend a year or two cooling his heels on (FINALLY) a thinly-veiled fictional analogue of Alcatraz Island - but of course our man’s troubles are far from over. Despised by his fellow inmates as a probable child-killer, he finds himself transferred - via the connivings of Mr Smug FBI Man - to a cramped cell housing the worst of the worst of the prison’s hard-nuts.

Headed up by sly mob boss Broderick Crawford, this happy crew also comprises Lon Chaney Jr (“a nice guy, so long as he’s locked up”), a young Charles Bronson (introduced as a mad-dog killer, his character is really more of a practically-minded, musclebound moralist), and best of all, William Talman (‘The Hitch-Hiker’ himself!) as Crawford’s jittery, bug-eyed lieutenant.

The general idea is that, placed in such tough company, The Ice Man will soon melt and spill his guts to the feds. Unbeknownst to the powers-that-be however, Crawford and the gang are mid-way through planning their Big Break Out, and the prospect of taking Meeker with them and forcing him to hand over his hidden loot is just too good to resist.

Unsurprisingly, this central ‘prison movie’ section is by far the most entertaining part of ‘Big House U.S.A.’, ploughing through the usual clichés with gusto, whilst the gang’s escape plan presents a sublime bit of craziness straight out of a Men’s Adventure magazine. Basically, they’ve been stockpiling stolen oxygen cylinders, keeping them hidden in a hollow chamber inside the giant furnace which forms the centrepiece of the prison’s factory floor. When the time comes, they’re just gonna slide their way into the water via the machine’s waste pipe and frogman their way to freedom, getting picked up on open water by a fishing boat rented by Crawford’s outside cronies.

Unfortunately, we don’t get to spend half as much time as we might have liked with this esteemed line-up of craggy-faced bruisers (more Bronson in particular would have been welcomed), but they all do fine work in what little screen time they’re allotted, and the sheer sight of them all crammed together in a tiny cell will be worth the entry price alone for some viewers.

Crawford and Talman do great work her as a tag-team of comic book villains, whilst Chaney, looking shockingly haggard here considering he’d been slogging his way through Universal’s dapper ‘Inner Sanctum’ mysteries only a decade beforehand, is his usual doddering, likeable self nonetheless. He is also gifted with what is by far this film’s best line, delivered after Meeker protests that, “I’m no skin diver, I can’t even swim,”. “You’ll make out, just pull the water toward you like it was a big dame” - truly a tough guy swimming lesson for the ages.

I confess, if I were reading this review, I’d be thinking at this point that ‘Big House U.S.A.’ sounds like an absolute riot, but seriously folks - don’t build yr expectations up too high for this one. Writer Higgins and producer Schneck had previously worked together on 1947’s T-Men, and unfortunately the same feeling of a solid, hard-boiled story sabotaged by reams of ass-covering “crime doesn’t pay” procedural bullshit also predominates here.

Unlike that earlier film however, ‘Big House..’ has neither John Alcott’s majestic photography nor Anthony Mann’s brooding, no bullshit direction to fall back on. Instead, Koch’s pacing is stupefying slack, largely compressing the ‘good stuff’ we came to see into a middle half hour sandwiched between the workmanlike, TV drama opening described above and a listless, tension-free trudge toward the story’s dispiriting conclusion, whilst Higgins’ scripting meanwhile is full of needless complexity and annoying incongruities.

Beyond the inevitable, ‘Dragnet’ style voiceover which patronisingly book-ends the movie, we spend what feels like hours hanging around in the Park Rangers’ office in the company of self-satisfied Special Agent Hadley and boring cop Roy Roberts as they trudge through every pain-staking step of building their case against Meeker, then as they proceed to snidely torment him once he’s behind bars - all wasting valuable time we could instead have spent watching Broderick Crawford puffing on a bootleg cigar or Bronson cracking his knuckles (or indeed, checking in with Felicia Farr, who has a great bit-part here as Meeker’s duplicitous female accomplice).

With the unrivalled efficiency and moral superiority of the forces of law and order reinforced at every turn, it’s enough to get the attendees of yr average PTA meeting yelling “fuck you, cop!” back at the screen, but worse than that, this concentration on the unflappable righteousness of the fuzz completely ruins the movie’s final act.

Handled differently, Meeker, Crawford and Talman’s fugitive journey across state lines, frantically trying to get one up on each other as they navigate their way toward the Colorado treasure-trove, could have made for some fantastically gripping, hard-boiled stuff. Here though, this potential is just thrown away - and not only because their journey conveyed via an unconvincing series of time-compressing ellipses, clearly thrown together as time and/or funding was running short.

As eccentric and perversely charismatic as these crooks may be, the film has basically granted them little agency, no intelligence, and no chance to develop anything beyond a one dimensional persona for themselves. As they approach their goal, we know that law enforcement is one step ahead of them, lurking in the bushes with fingers on their triggers, and the hoods’ collective failure is a foregone conclusion.

On paper, the downbeat fate doled out to these admittedly horrible characters should be an explosion of classic noir fatalism, but as executed here by Koch and co, it’s simply banal, with Special Agent Smug Bastard adding insult to injury as he dusts off his hands and warns us all to stay straight and fly right.

Though noteworthy for its stellar cast, unconventional structure and stark moments of callous (albeit off-screen) violence, ‘Big House U.S.A.’ is ultimately a poorly rendered disappointment which does little to capitalise on the talents of those on either side of the camera. A passable mid-week watch, but one best left for completists or the morbidly curious, I suspect. 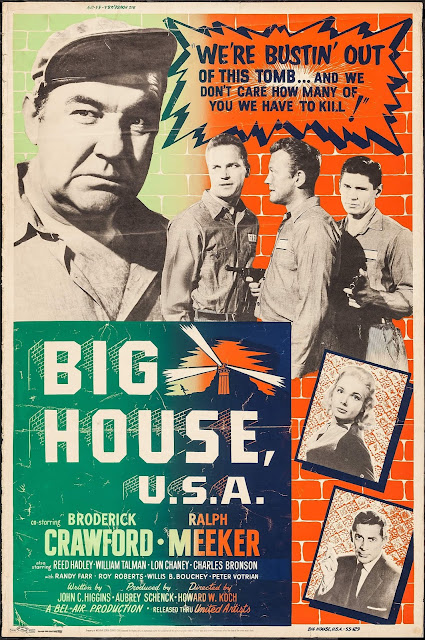 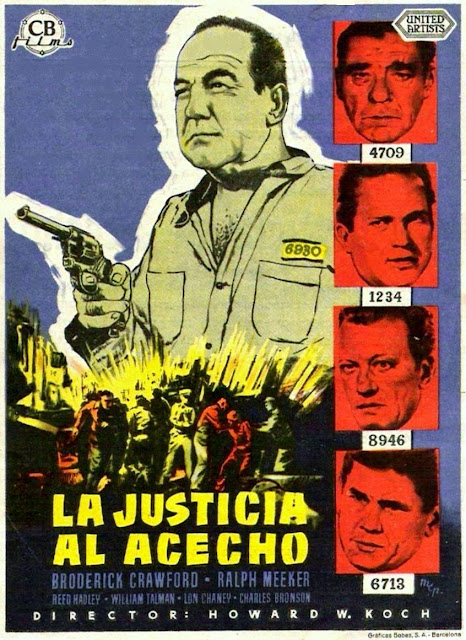 (1) After directing this movie back to back with the more highly regarded b-noir ‘Shield for Murder’ (1954), Howard W. Koch’s brief directorial career went on to include the likes of ‘Bop Girl Goes Calypso’, ‘The Girl in Black Stockings’ (both ’57) and the oddball Boris Karloff vehicle ‘Frankenstein 1970’ (1958) before he transitioned into a far more successful career as a producer from dawn of the ’60s onward.