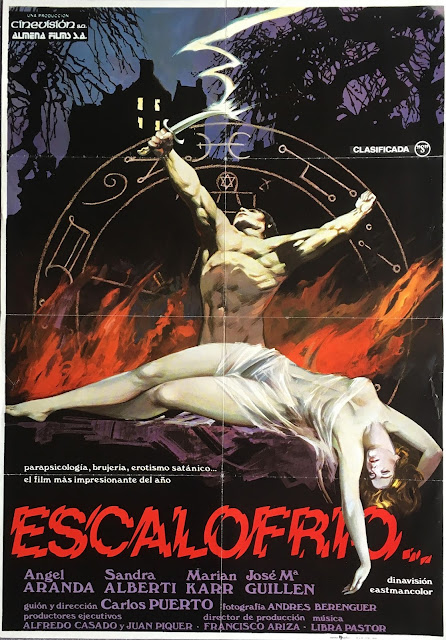 Seemingly one of the first Spanish horror films to take advantage of the “S” (for ‘sex’) certificate introduced to the country’s ratings system as part of the easing of censorship which accompanied the collapse of the Franco regime in the late 1970s, this out-of-nowhere devil worship shocker (Juan Piquer Simón of ‘Slugs’ and ‘Pieces’ infamy takes a production credit, director Puerto had previously helmed Paul Naschy’s little-known political thriller ‘El Francotirador’ [‘The Sniper’]) charmingly opens with a few minutes of run-time padding mondo type business.

First up, a purported professor of parapsychological matters delivers some generic blather vis-à-vis the dangers that dabbling with the forces of darkness continues to pose in our contemporary world. His brief lecture is interspersed with close-ups of illustrations from the same coffee table witchcraft book which will later turn up as a prop in the main body of the film, which amusingly results in an inadvertent guest appearance from the ubiquitous Alex and Maxine Sanders (last glimpsed around these parts when we looked at ‘Legend of the Witches’ (1970) and ‘Secret Rites’ (1971) last year).

This leads into a decidedly sleazy studio recreation of a generic black mass / virgin sacrifice type scenario, which succeeds admirably in demonstrating what I think we can probably all agree is the true function of The Black Arts within modern society – namely, giving creepy bearded men an opportunity to publically molest impressionable young women, often to the accompaniment of dissonant synthesizer music.

After that’s all over and done with, we finally open the movie proper and are introduced to our protagonists, Andrés and Ana (José María Guillén and Mariana Karr), a glumly average young couple who live happily in a pokey Madrid flat with their German Shepard, Blackie (no racial connotation intended there, let’s hope).

Although a night of dancing and drinking is out of the question for the couple (Ana is four months pregnant), they nonetheless decide to cheer themselves up with a night on the town, and so, after taking in a first run screening of ‘Star Wars’ (check out that marquee!), find themselves aimlessly driving around the city, with Blackie ensconced in the back seat.

Little do they realise however that this leaves them in a perfect state of receptive boredom to be hailed down by Bruno (Ángel Aranda, a one-time peplum regular who horror fans might recognise from ‘Planet of the Vampires’ (1965) or ‘A Dragonfly for Each Corpse’(1975)), a well-dressed playboy type who claims he was Andrés’ friend back in his school days, even though he looks considerably older than Andrés, who doesn’t remember him at all.

Exuberantly friendly, as is the want of OBVIOUS SATANIST SWINGERS, Bruno and his wife Berta (Sandra Alberti) invite Andrés and Ana back to their place to celebrate their ‘reunion’, and, having nothing better to do, our protagonists acquiesce – only to reconsider when, an hour’s drive into the countryside later, they find themselves traversing the kind of foreboding, overcast rural hellhole in which José Ramón Larraz would probably have chosen to shoot a movie.

Many of us no doubt have taken the decision to get the hell out of dodge as soon as we saw Luis Barboo – a towering actor who played muscleman/heavy roles in a number of early ‘70s Jess Franco films – clad in a full length cloak, opening the gates to the Bruno & Berta’s modest country estate. But, unfortunately, Andrés and Ana are as feckless and easily-led as they come – doe-eyed rabbits in the murky headlights of their hosts’ nefarious intentions.

Things get even more uncomfortable once the hosts declare that it’s time to get the ouija board out (actually, they have a swanky, specially engraved ouija table for the occasion), prompting a series of unsettling declarations from the spirit world which prompt Bruno and Berta to start sniping at each other about their shared history of suicide attempts.

It’s certainly hellish alright, but more in a Chris Morris/Alan Partridge vein than a Bava/Fulci one for the most part - although, did I mention the bit where Ana walks in on Berta in the kitchen and funds her chowing down on a dog’s bowl full of gory, unidentified offal? Not a good sign.

Again, I’m sure even the most timid amongst us would be WELL ON OUR WAY HOME by this point, flimsy “you’ll never manage to find the roads in this bad weather” excuses or no. But, Andrés and Ana are not like you and I, so we soon find them sitting expressionless in the guest bedroom, awaiting whatever other atrocities the night has in store. (Well, actually they take a bath together – presumably just because there’s not been any nudity on screen for quite a while at this point. There’s not much water in the tub, and it looks freezing.)

The closest thing ‘Satan’s Blood’ offers to a shit-just-got-real moment follows, as Ana’s attempt to enjoy some classic, gothic horror style nocturnal nightgown peregrinations is rudely interrupted by the creepy, hobo-type guy who has been hanging around the house’s kitchens for reasons which are never adequately explained. A jarring attempted rape scene ensues, which seemingly proves enough to rouse even Andrés from his complacency. Setting off together to confront their hosts vis-à-vis the perennial issue of just-what-the-heck-is-going-on-around-here, the couple find Bruno and Berta sitting naked within the pentagram etched into the floor of their living room, backed by a roaring fire!

It’s as if, in the second half of the decade, somebody turned the overhead lights on, doused the fire and poured the the last few trickles of J&B down the sink. By this point, horror films across globe had (for better or for worse) become nasty, squalid and mean, and this film’s intermittent attempts to swim against the tide prove woefully ineffectual.

As the remnants of gothic cliché fade into obsolescence, the Satanists’ glitzy accoutrements merely seem tacky and gauche, whilst the ever-more-feral demands of the horror audience instead demand that we’re confronted with dead dogs, steaming bowls of offal and hobo rapists, all arrayed across grimy linoleum floors. Instead of being deliciously disorientating meanwhile, the fact that nobody at any point does anything that makes sense merely seems annoying.

In short, everything in ‘Satan’s Blood’ looks cold, uninviting and shabby. Rather than abandoning themselves to a life of amoral sensory indulgence when they awaken the next morning, our characters proceed about their glum business as if the previous evening’s gruelling shag-fest had never happened - which I’ll choose to read as a presumably realistic portrayal of the embarrassing aftermath of unplanned group sex, rather than just the result of the producers shoehorning the sex scene into the film late in production to up the exploitation factor.

Ana is back in her frumpy jumper, complaining that Berta (confined to bed as a result of the night’s ceremonial exertions) needs to see a doctor, and the familiar, anxious ballet of we-need-to-get-going / oh-no-our-car-won’t-start / why-don't you-stay-for-lunch proceeds apace, until the flagging narrative eventually tries to retool itself as a kind of cracked murder mystery / walking corpses “but-we-saw-you-you-were-dead” type effort.

Viewed from the other side of the mirror however, there are a few aspects of ‘Satan’s Blood’ which stand out as noteworthy within the Pete-Walker-triumphant canon of grim, post ‘75 European horror. In particular, I appreciated the way that, in stark contrast to the hoary old tradition of pulp devil worship yarns, the Satanist couple here are gradually revealed to be disturbed, ineffectual and rather pathetic individuals, locked into some kind of self-destructive, co-dependant mania.

A far cry from the high-handed, baronial masterminds of a Dennis Wheatley novel, they are basically just desperately unhappy neurotics in search of some kind of power and fulfilment – a malign flipside of the emotionally neutered boredom evinced by our ‘innocent’, mainstream protagonists.

Though underexplored here, this attempt to deflate the pomposity of evil takes us all the way back to Val Lewton’s ‘The Seventh Victim’ (1943), even though it is entirely undermined by the film’s rather desperate decision to try to transform itself into a ten-years-late ‘Rosemary’s Baby’ rip-off in its final act, introducing an omniscient societal conspiracy angle, which… makes about as much sense as any of the other slackly scripted rubbish our unfortunate hero and heroine have to contend with over the course of this motion picture, I suppose. Poor bunnies.

Striking an uneasy balance between the transcendental and mundane strands of ‘70s occult horror, ‘Satan’s Blood’ ultimately succeeds at neither, but if you find yourself in the mood for a prime slice of chilly and mean-spirited late ‘70s witch-smut (and don’t we all, once in a while), it should nonetheless hit the spot pretty satisfactorily, sitting comfortably next to such grubby items as Killer’s Moon or Mario Mercier’s ‘La Papesse’ / ‘A Woman Possessed’ (which I briefly wrote about in this post), more-so than the earlier, more ethereal takes on the sub-genre suggested by its storyline.

The professor at the beginning og this movie is Fernando Jiménez del Oso, a very popular expert in paranormal stuff in Spain. He made many TV programs abouy UFO's, poltergeist, ancient astronauts... all these things. Including him in the movie was a clever movement of the producers.

Many thanks for taking the time to pass on this info C. Rancio, that's really good to know. Doing a quick search, Senor Oso sounds like an interesting character to say the least!