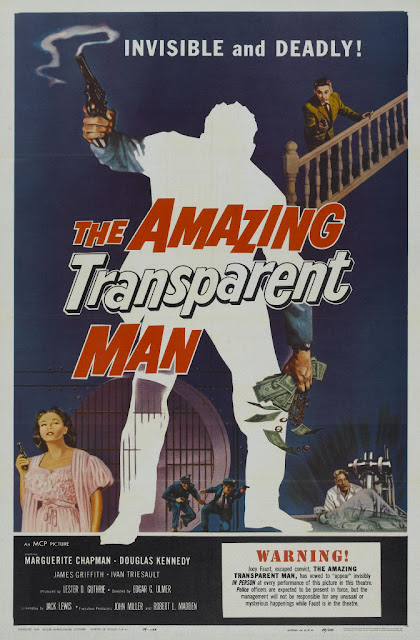 Over a quarter of a century after ‘The Black Cat’ (1934), and the best part of a decade since The Man From Planet X, Edgar G. Ulmer found himself in even more reduced circumstances than usual, shooting this late doors atom age ‘invisible man’ programmer back-to-back with the same year’s ‘Beyond the Time Barrier’.Despite working under the contraints of a punishing two week shooting schedule (for both films) however, the indefatigable Ulmer still managed to transform ‘The Amazing Transparent Man’ into a haunting rumination on state power, the trauma of war and the malign consequences of scientific brinkmanship, with a touch of sombre, American gothic pictorialism thrown in for good measure – all neatly wrapped up in 57 minutes.

In a scenario highly reminiscent of the Bogart/Bacall vehicle Dark Passage, the movie opens with an incarcerated safecracker, the pointedly named Joey Faust (Douglas Kennedy), escaping from the pen (ten bucks says the brief prison break footage must have been stolen from another movie), only to find himself aided in his getaway by an attractive blonde (Laura, played by Marguerite Chapman) whom he’s never seen before in his life.

(Whilst researching this post on IMDB, I was astonished to discover that Douglas Kennedy was actually in ‘Dark Passage’, playing a detective; which seems like a fairly remarkable coincidence, but… if there’s a behind-the-scenes story here, I don’t know it, so let’s move on.)

The imitation of Delmer Davies’ 1947 film continues for at least a little bit longer as Faust and Laura negotiate a police check-point, but things subsequently takes a hard left – both literal and metaphorical – as she proceeds to drive him down a series of ominous, rather bleak looking country lanes, emerging in front of an austere, wood-panelled farmhouse, standing starkly against the landscape like something out of an Andrew Wyeth painting.

Approaching the house, the couple are met by a surly, gun-toting man named Julian (Red Morgan), who ushers them inside, where Faust is granted an audience with Major Krenner (ubiquitous TV villain actor James Griffith), the sinister cat who seems to have been responsible for orchestrating his prison break.

(There’s a great, hard-boiled bit here as Krenner disarms Faust whilst Julian covers him with a rifle; “Y’know what one of these bullets will do from behind? It’ll rip out yr spine and roll it up like a ball of string,” Morgan croaks venomously, channelling a thousand western villains.)

Politely declining to identify the country in whose armed forces he has attained the rank of Major (any guesses?), Krenner informs Faust that if he wishes to remain alive, he will henceforth he required to assist him in his as-yet-unspecified plans, after which he is ushered upstairs to take a look at – you guessed it – the laboratory.

In a cramped, lead-lined attic set jam-packed with outdated mad science clobber, we meet Dr. Ulof (Ivan Triesault), an elderly scientist of apparent Eastern European extraction, and learn that he has been working under Krenner’s command to perfect a form of time-limited invisibility, enabled through exposure to highly unstable radioactive isotopes.

The humans retreat to a lead-lined observation chamber whilst the super-charged atomic x-rays do their work, reducing a cute little guinea-pig to a state of complete invisibility (quite a decent effect actually) - and of course it don’t exactly take a disgraced experimental physicist to figure out that Faust himself is going to find himself strapped to the same gurney PDQ.

As Faust finds himself rendered invisible and forced to break into a series of government research labs to steal a load of even more dangerous nuclear material, it gradually becomes clear that no one in this ill-fated farmhouse is there of their own will; all are being coerced by Krenner through a mixture of blackmail, threats and lies.

Ulof, we learn, is a concentration camp survivor assumed dead by the U.S. authorities. In a horribly surreal touch, Krenner is forcing him to conduct work he feels is dangerous and immoral by keeping his young granddaughter – Ulof’s only other surviving blood relative – imprisoned in a locked room right next to the lab.

The thread drawn between the atrocities of WWII and their continuation in the movie’s present feels horribly palpable in Triesault’s convincingly haunted, emotionally desolate performance, whilst the image of him subsisting on a shabby camp bed, screened off in the corner of the lab right next to the steel door of his granddaughter’s cell, is queasily heart-breaking.

An unusual protagonist, Kennedy plays Faust as essentially a big lug, his actions self-serving and fool-hardy, but he says “yeah” in that same clipped way Warren Oates does, so we know he’s got a bit more than that going on upstairs - or enough base cunning to upset Major Krenner’s unstable house of cards at the very least.

This uncertain struggle for power lends the film a weird noir grit, as characters are repeatedly whacked with bottles, threatened with guns and locked in dark rooms as the interplay between the residents of the house becomes increasingly frantic - whilst all the while, the threat posed by the heaps of lethal fissionable material casually stashed in the attic throbs gently in the background.

Offering up a bleak dose of atomic existentialism, the film’s pessimistic conclusion seems to mirror the blasted, lifeless rural location in which the film appears to have been shot – itself an echo of an imagined, post-nuclear hinterland.

Once Krenner has been overpowered and his mis-matched prisoners have made their escape, Dr Ulof hits Faust with the bad news that many viewers will no doubt have already guessed – namely, that the vast doses of radiation he has been exposed to in the course of the invisibility process has left him with barely days to live. Possessed by a sudden sense of fatalistic moral certainty, he leaves the other surviving characters to drive off toward a decidedly uncertain future, making his way back into the farmhouse for one final conflagration…

Though ‘The Amazing Transparent Man’ is not really a horror movie in terms of its plotting, the characteristically doom-laden atmosphere Ulmer brings to proceedings sways it pretty heavily in that direction. Even the swampy terrain Faust stumbles through during his opening prison-break is shadowy and foreboding, whilst the relentless, sawing cello of Darrell Calker’s appropriately minimal score does an efficient job of putting us on edge right from the outset.

Whilst the impoverished circumstances under which the film was produced prevent it from even approaching the same level as Ulmer’s best work, for anyone seeking further evidence to cement his status as classical Hollywood’s favourite underdog auteur, this one is absolute gold dust.

Not only does it find the director throwing in some striking, expressionistic visuals which seem distinctly out of place in the realm of low budget ‘50s sci-fi, but he also twists writer Jack Lewis’s admittedly potent premise toward the same themes which had dominated his work ever since ‘The Black Cat’ and Detour, exploring ideas of imprisonment and inter-personal control, of the trauma of the past contaminating the present, and of inescapable, predestined doom.

Viewed in wider genre terms meanwhile, the film stands as a noteworthy, albeit minor, entry in the lineage of stark, atomic paranoia which runs from Aldrich’s ‘Kiss Me Deadly’ a few years earlier to Joseph Losey’s ‘The Damned’ a few years later, and even, eventually, to Troy Kennedy Martin’s extraordinary BBC drama Edge of Darkness in 1985.

So far as I’m aware, ‘The Amazing Transparent Man’ remains largely unacknowledged by surveyors of this particular sub-genre / sensibility, but I would strongly urge them to track it down. Though a ‘small film’ in every respect, the intrinsic merits of its strange scenario, and of its director’s cracked vision, lend it a rather haunting, morally ambiguous quality which easily surpasses its budgetary shortcomings.
Posted by Ben at 13:32