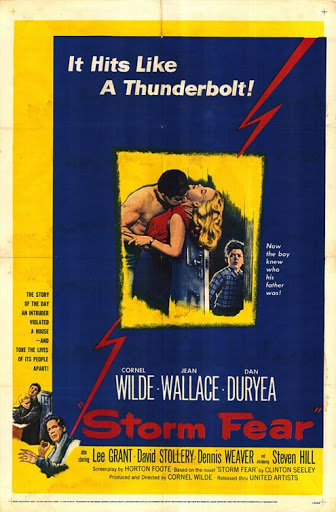 The directorial debut of tormented-leading-man turned tough-guy-auteur Cornel Wilde, ‘Storm Fear’ (adapted from a book of the same name by the otherwise little-known Clinton Seeley) is to some extent a low rent, ‘50s riff on the old ‘Key Largo’ scenario, with added familial melodrama, and a rural, snowbound location reminiscent of Nicholas Ray & Ida Lupino’s ‘On Dangerous Ground’ (1953).

Naturally, the crooks are planning to hide out overnight following a botched heist which has left two men dead – Charlie has an infected bullet wound in his leg, thus allowing Wilde to foreground his masculine virility by playing the entire movie in various degrees of sweaty, gritted teeth pain – and naturally, they’re none too happy when a sudden blizzard appears to leave them stuck with the family for the duration, as the municipal snow-ploughs and police dragnet move ever closer.

For the first half of the movie, it’s hot and cold running melodrama, as the six characters, each with their own grievances and personal agendas, bounce off each other on the cramped sets representing the Blake homestead. There is plenty of self-justifying, chest-beating (and generally poorly composed) speechifying, much hissed unpacking of family secrets, some waving around of guns, and a great deal of exhausted, futile grappling between the men.

The most surprising aspect of the drama arises from the fact that, whilst we might naturally be expected to sympathise with the family being subjected to this home invasion scenario, the meek, semi-incapacitated father figure is actually portrayed as a bit of a dick. It’s interesting to see Duryea – who made his name playing sneering heels in ‘40s noirs (see ‘Scarlet Street’, ‘Black Angel’, ‘Criss Cross’ etc) – essaying a slightly different kind of flawed male here, as the spiteful, emasculated patriarch. (Ten years earlier, he would have been in Hill’s role for sure).

Acting coldly toward his wife and ‘son’ even before the intruders arrive, it’s later revealed that Frank shot the kid’s beloved dog simply because it was a gift from brother Charlie(!), whilst Wilde’s raw, alpha male charisma and affectation of paternal warmth meanwhile draws the sad-lad-in-search-of-a-dad toward him with a kind of irresistible, magnetic pull, even as he realises that his ‘uncle’ is clearly no good and a bad ‘un, who’s probably gonna get everybody killed, more than likely.

Hill and Grant meanwhile proceed to stir the pot, doing what hoodlums and low status nogoodniks have done throughout movie history, mixing genuine menace with just being really annoying. (As in much of Wilde’s later work, there’s a kind of puritanical sub-text running through the film suggesting that people who drink alcohol, smoke or get up late in the morning are inherently no damn good.)

One particularly cringe-worthy, seemingly improvised bit sees Grant’s Edna seemingly auditioning for Claire Trevor’s Oscar-winning part in the aforementioned ‘Key Largo’, singing along to the radio and reflecting on her long-gone days as a showgirl, in lieu of her character being given anything else to do, whilst Hill’s Benjie simply succeeds in being spectacularly dislikeable as the comically venal, simple-minded thug of the piece.

Meanwhile, Wallace, never the most gifted of actresses to be perfectly honest, dutifully tries to get on with her life of frontier wife drudgery whilst being bothered and harangued by no less than five needy males (if we count belatedly heroic handyman Dennis Weaver), her facial expressions running the gamut from ‘pained’ to ‘offended’ and back again with tedious regularity.

To be honest, I wasn’t sure I could handle ninety solid minutes of this, but thankfully things open up a bit in the second half of the picture, as the crooks set out to make their getaway, traipsing across the forbidding mountain pass which separates them from the nearest highway, wearing gigantic wicker ‘snow shoes’ and forcing the kid to accompany them as a kind of local tracker, showing them the way.

This kind of rugged, ‘survival against the odds’ stuff went on to become Wilde’s bread and butter in his later directorial career (which included such highlights as ‘The Naked Prey’ (1965) and ‘No Blade of Grass’ (1970)), and indeed, he manages to build quite a gritty and exciting little wilderness survival drama here, despite some all-too-obvious budgetary constraints, which sometimes give the impression that the desperate trekkers are merely schlepping their way up a single hillside behind the house. (Most of the exterior close-ups meanwhile seem to have been shot back at the studio with painted backdrops, which certainly doesn’t help.)

Nonetheless, things turn pretty nasty pretty quickly here, leading us to the film’s most purely nihilistic noir moment, as Charlie takes the decision to callously abandon Edna, who has broken her ankle after being pushed down a ravine by the thuggish Benjie. Throwing her share of the loot after her before they move on, her accomplices leave the now useless bank notes strewn around her prone, mink coat-clad body as she pleads for help. Pretty dark stuff, especially as Charlie drags the tearful kid off by the arm, immediately babbling away as he tries to rationalise his inhumane behaviour.

In fact, Charlie’s desperate attempts to try to justify his actions to his law-abiding family members make for probably the most consistently compelling aspect of the film’s scripting. “There was nothing else we could do”, “someone will find her, she’ll be ok”, “I never shot anybody,” he keeps repeating to himself, painfully aware that no one is buying it, and that the line separating his self-image of tarnished nobility from Benjie’s openly villainous, sewer-rat approach to life is wearing increasingly thin as their situation deteriorates.

In making ‘Storm Fear’, Wilde seems to have called in some fairly heavy favours. The photography of Paramount veteran Joseph LaShelle (‘Laura’ (1944), ‘Where The Sidewalk Ends’ (1950)) is impressive, if never stylised or expressionistic in the manner of his more classic noirs, and the equally effective musical score is provided by no less a personage than Elmer Bernstein, with both of these gentlemen’s contributions helping smooth the rough edges of Wilde’s characteristically workmanlike, point-and-shoot compositions and decidedly blunt approach to directing actors.

As with most of Wilde’s later productions, ‘Storm Fear’ is an interesting watch despite its flaws, and has the potential to linger long in the mind… if not necessarily always for the right reasons. The material is far too contrived and over the top for us to really take it seriously, but as usual, Wilde’s approach is too gruelling, sincerely intended and emotionally enervated for us to enjoy the unsavoury proceedings as mere pulp escapism either.

Further filtered through the director’s own strange set of bug-bears, vanities and recurring obsessions, the blatantly unsatisfactory ‘happy’ ending tacked onto the story’s bleakly inconclusive conclusion simply leaves us feeling… I don’t know… exhausted, and a bit seedy, perhaps? And what could possibly be a more ‘noir’ state of mind than that, I suppose.

For such a low budget and generally un-beloved production, this movie sure ended up with a lot of different poster artwork. 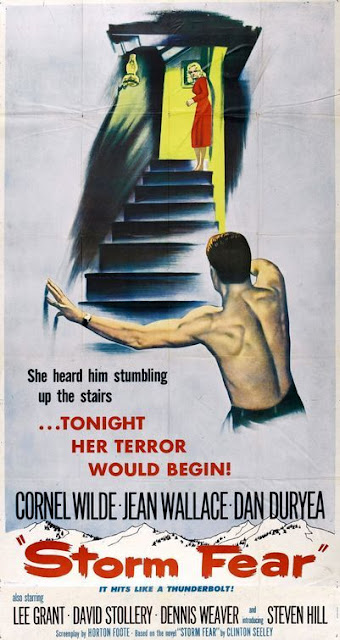 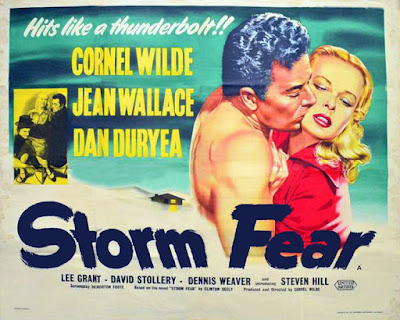 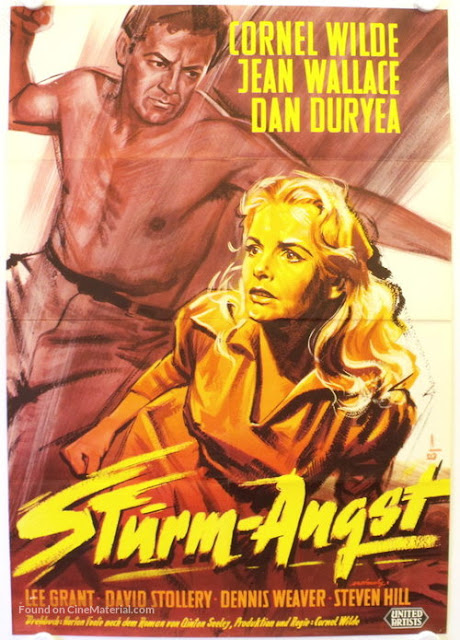 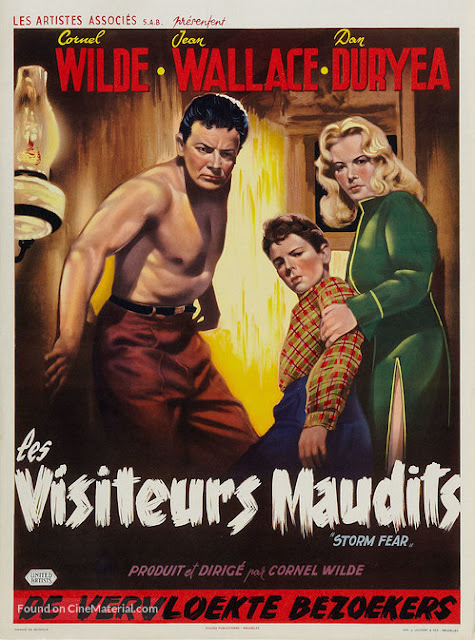