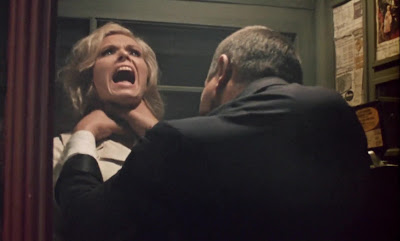 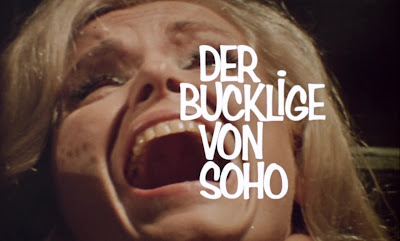 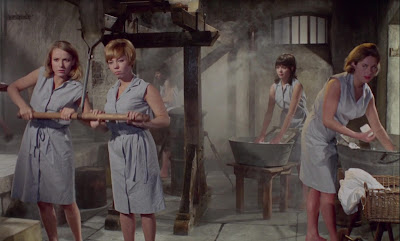 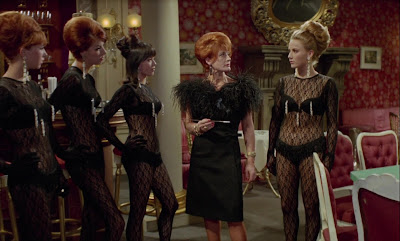 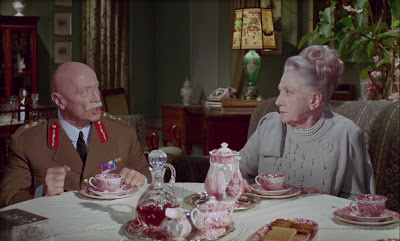 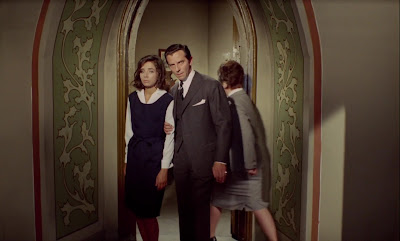 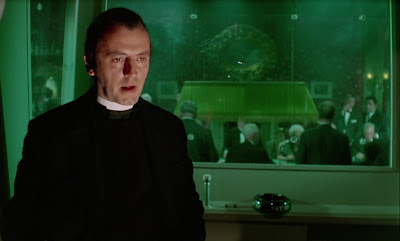 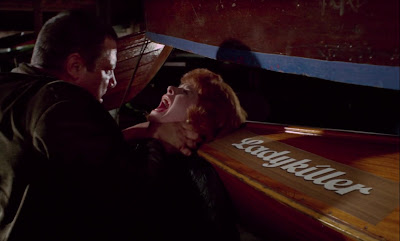 There’s nothing quite like movies which present a mythic/fantastical/completely absurd take on places quite near to where you live, is there? (“Have you seen ‘The Hunchback of Soho’?”, “Seen ‘im? I think I bought him a pint down The White Horse last week!”, etc.)

In fact, this is probably the element which most appeals to me above all about the West German Edgar Wallace ‘Krimi’ films spearheaded by Copenhagen-based Rialto Film - their bizarre conception of a phantasmagorical England that feels like an amalgam of the 1960s and 1890s, defined by strangulations in fog-choked, cobblestoned alleyways, sinister rendezvous in neon-lit, subterranean speakeasies and elaborate tea parties in gothic manor houses, all of which are liable to be interrupted at any moment by dapper, pipe-smoking detectives as they break down the plywood doors (probably using an oversized umbrella), enunciating that cry guaranteed to send shivers down the spine of all rapscallions and ne’erdo wells, “SCOTLAND YARD!”.

Despite its magnificent title however, there is sadly little Soho ambience (either real or imagined) to be found within Alfred Vohrer’s ‘Der Bucklige von Soho’, even as it opens in attention-grabbing fashion with the titular hunchback committing exactly the kind of back alley strangling described above, callously throttling a young lady in black lingerie and high heels as she flees from what appears to be another one of those sinister nightclub-brothels which seem to proliferate in Krimi London.

In fact, the vast majority of this caper takes place on a series of interior sets, variously representing the opulent drawing room of the elderly General & Lady Peabody, the authoritarian religious school for wayward girls which they sponsor, the secret subterranean workhouse / villain lair within which the criminally-minded proprietors of said school conduct their dastardly business, and the casino-cum-nightclub wherein the imprisoned girls are put to work as dancers / hostesses.

All of these locations seem to be inter-connected in a way that I never fully understood, allowing characters to move between them as if they were merely popping between rooms, and thus largely doing away with the need for exteriors, beyond the aforementioned alleyway set and a few stock shots of police cars zooming around Westminster and Piccadilly. Efficient though this must have been from a production perspective however, it lends the film a rather claustrophobic, repetitious feel which doesn’t necessarily serve it well.

Achieving a delicate balance between illogic and boredom, the plot here is likewise a bit sub-par, rehashing elements of Vohrer’s earlier, arguably definitive, krimi The Dead Eyes of London (1961, itself a loose remake of the similarly-named 1939 Bela Lugosi movie), with a distinct sense of diminishing returns. The familiar material is given a bit of a Women in Prison makeover this time around, making it feel reminiscent at times of Pete Walker’s later ‘House of Whipcord’ (1974) – albeit,  a somewhat softer, more innocent variation on the scenario in which the doddering elderly couple remain blissfully unaware of the kinky depredations being perpetrated below stairs, or in the dungeon, or round the corner, or wherever the heck the ‘school’ is supposed to be in relation to their house.

Though the perennial theme of girls being kept imprisoned against their will is explored in abundantly suggestive fashion here, the film’s mid-‘60s production date ensures that the floodgates to full-on sleaze remain closed, with the obligatory lechery and low-key sadism presented in a prim, buttoned down fashion that, ironically, makes it all feel far more icky and perverse than would have been the case if they’d just thrown in a bit of good ol’ no nonsense nudity and brawling to relieve the tension.

So, no shower scenes, cat-fights or lesbian frolics here, but we instead get to enjoy such curious sights as the imprisoned girls being forced to sing jaunty hymns against their will, and – in probably the film’s weirdest tableau – a newly captured heiress in elegant evening wear being thrown on the filthy floor of the ‘workhouse’ set and doused with a hosepipe by the leering hunchback, whilst the other girls toil on around her, paying no mind.

Earlier in the ‘60s, Vohrer had established himself as by far the most inventive and accomplished director on Rialto’s payroll, but unfortunately his work proves disappointingly pedestrian here, suggesting that he was either working under greater time and budgetary pressures than usual, or was simply dog tired of making these damned things.

As such, uninterrupted master shots tend to predominate, and the bizarre stylistic experiments which proved so memorable in Vohrer’s earlier films are notable by their absence. No shots taken from the POV of a newspaper, or from the interior of someone’s mouth, here, sadly. About the best we get are a few strangling and/or gun-wielding hands looming into frame from the bottom left, comic book style. A nice touch, but pretty trad, dad, by the wacky standards set by Vohrer’s earlier work.

Meanwhile, ‘Hunchback..’ suffers further from the absence of the majority of the group of actors I’ve come to think of as the “Krimi gang”. Although Siegfried Schürenberg returns as the perpetually flustered ‘Sir John’ (a role he played in over a dozen Wallace adaptations), big hotters like Dieter Eppler, Werner Peters, Karin Dor and Klaus Kinski were all AWOL for this one - as, regrettably, was our usual dashing silver fox, Joachim Fuchsberger.

In his absence, Günther Stoll (who for some reason would later go on to corner the market in Italian-German giallo/krimi crossovers, appearing in Dallamano’s ‘What Have They Done to Solange?’ (1972), Duccio Tessari’s ‘The Bloodstained Butterfly’ (1971) and Freda’s ‘Double Face’ (1969)) steps into the obligatory suave, pipe-smoking detective role, but, despite a peculiar bit of comedic business about him doing his laundry, Stoll lacks that patented Fuchsberger charm; as a result, he is assigned relatively little screen-time and ultimately proves a bit of a non-entity.

One familiar presence we cannot escape here though is, naturally, that of ubiquitous funnyman Eddi Arent, although mericfully, his role actually takes quite an interesting turn during the film’s second half, as he ditches his usual ‘finickety, simpering choirmaster’ shtick, donning mirror shades as he reveals that that persona was actually nothing more than cover for his true identity as a dastardly criminal mastermind overseeing the whole ‘white slavery’ operation – a role which he throws himself into with hard-edged gusto .

There is, however, no shortage of gratuitous comic relief to be found elsewhere, between a bungling, short-sighted solicitor, the delusional General Peabody perpetually re-living WWII tank battles, and the aforementioned Sir John. Together, these over-enunciating oddballs conspire to make sections of ‘The Hunchback of Soho’ pretty tough sledding, especially as the English fan-subs on the version of the film I watched did little to preserve the no doubt uproarious phrasing and comic timing of their high-pitched German exclamations.

I swear, during one drawing room tea party scene which united all of these characters, plus Arent in his comic persona, I thought I’d died and become trapped in some kind of particularly fiendish purgatory. It was only the sight of the generous platter of shortbread and bourbon biscuits they were enjoying alongside their Earl Grey which kept me going, together with pondering the political ramifications of a West German film which presents a retired British general as a bumbling, senile buffoon with a tendency to end sentences with things like, “..and that’s why we won the war!”.

On the plus side, ‘Hunchback..’ has the distinction of being the first Krimi made in colour, and I must say, they did a very good job of it too, capturing that very specific, mid-‘60s grungy/atmospheric pseudo-Technicolor look in which deep pools of black contrast with vast swatches of brown and dark green and intermittent blasts of bright red, lending the film a visual depth which, if it’s not quite up to the standard of Hammer’s pre-’66 gothic horrors, at least compares favourably to some of their more handsome imitators.

By far the best thing here though is Peter Thomas’s characteristically hellzapoppin’ score, which arguably proves more exciting than anything which actually transpires on screen, beginning with a title theme that takes the “hoo, hah” backing vocals from Sam Cooke’s ‘Chain Gang’ down for a beating in some subterranean, reverb-drenched hell, before proceeding to take us on a chamber-of-musical-horrors tour incorporating bulbous, Residents-esque discordo-jazz, spidery, Ventures-at-Halloween surf guitar and assorted screams and wails of the damned, all set to a persistent pulse of thunderous caveman drumming.

I know that Thomas has something of a cult rep amongst the more shadowy corners of the soundtrack/library collectors world, but seriously, has anyone ever reissued the music he recorded for these Krimis..? If not, they really should. It’s completely out to lunch, some of the wildest, most errant aural craziness I’ve ever heard crow-barred into a motion picture (this side of the Indian sub-continent, at least), and I’m sure it would go down a storm with whatever remains of the garage punk/exotica contingent.

That aside though, I’m afraid ‘The Hunchback of Soho’ is, on every level, a disappointment. In addition to featuring very little Soho, it even has the audacity to give us a FAKE hunchback, if you can believe that. Richard Haller, who portrays Harry the hunchback here, proves a pale imitation of Ady Berber’s unforgettable turn in ‘The Dead Eyes of London’, and yes, in the final reel, Stoller pulls aside his jacket to reveal a false hump! Hopeless. (Though it must be said, the mystery of quite why this guy found it necessary to go around pretending to be a drooling hunchback 24/7 proves far more perplexing than anything in the film’s ostensible plotline.)

In spite of the novelty of colour and a somewhat higher sleaze quotent than was permitted for entries earlier in the decade then, we must sadly chalk this one up as weak tea for Krimi enthusiasts, and a total write-off for any viewers hoping to make a sideways move into the genre from straight horror. It’s a perfectly reasonable time-killer, and nice to look at, but really - only completists, WIP historians, Peter Thomas archivists or the terminally bored need knock upon this door. 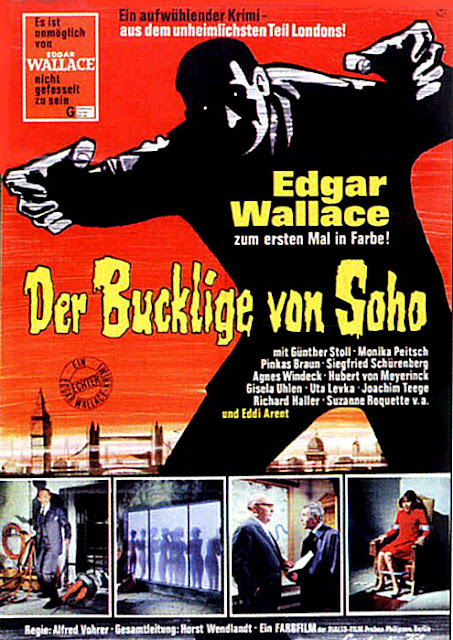