Horror Express:
It! The Terror From Beyond Space
(Edward L. Cahn, 1958) 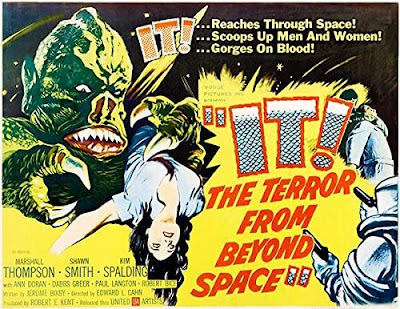 If the fact that much of the first half of Dan O’Bannon and Ronald Shusett’s original script for Ridley Scott’s ‘Alien’ was borrowed from Mario Bava’s ‘Planet of the Vampires’ (1965) has been widely acknowledged by this point in time, it seems to have been less frequently observed that a significant amount of the material in the second half of Scott’s film (the ‘monster loose on the ship’ stuff) comes to us direct from this little number – an admirably straight-up SF-horror programmer, made for peanuts in 1958, and likely selling a great many more of them as it proceeded to blow the minds of monster kids around the globe in these good ol’ triple feature matinees and suchlike.

In the far-flung future of 1973(!), a moustached official addressing a press conference in a disconcertingly cramped looking White House briefing room sets the scene for us. Earth has lost contact with the first manned mission to Mars shortly after it landed, and a shiny, lava lamp-shaped rescue ship has been dispatched upon its wobbly, sparkler-powered way to see what gives.

We re-join the crew of this rescue ship shortly before they once again depart from the red planet, having picked up the sole survivor of the earlier expedition, Colonel Carruthers (Marshall Thompson), who claims that the rest of his crew were killed by an unseen monster of some kind. Disregarding this fantastic story, the rescue ship guys naturally figure that he must have murdered his crewmates in order to maximise his own chances of survival after their ship crashed, and are determined to return him to earth to face a military firing squad (so we’re told?!). Before take-off however, there’s some brief faffing about with someone accidentally leaving the loading bay doors open for a while, and… you can see where this is heading, right?

We’re first introduced to the crew of the ship via a series of ‘portrait’ shots which see them taking their positions for take-off and reporting their readiness, during which we note that, alongside about eight men, there are two women taking active roles on-board ship, which seems at least slightly progressive by the standards of the 1950s, don’t you think? [Also, it’s the same gender balance as ‘Alien’, if we’re keeping score.]

Immediately after this launch sequence however, we cut to the mess room, where the men are sitting around the table relaxing, talking about what they’re going to get up to when they’re back on Earth etc [shades of ‘Alien’, once again], whilst the two women hover behind them, refilling their coffee cups and collecting their dirty plates! Welcome to 1973, ladies.

Needless to say, for those who believe that science fiction should be a genre defined by Big Ideas, ‘It! The Terror from Beyond Space’ will prove absolute anathema. Issues of social progress, man’s place in the universe, or the possible implications of contact with extra-terrestrial life, all remain resolutely unexplored here. The film’s monster does not change shape, change size, absorb its victims’ personalities, communicate telepathically, reproduce asexually, become invisible, or do anything else remotely weird or noteworthy.

It may initially hide itself by lurking in the heating vents [ala ‘Alien’], but once it emerges, there’s no funny business with this guy – he’s just a good ol’ fashioned monster, with the teeth and the claws, and the growling and stomping, dragging corpses around and sucking the moisture and/or ‘life essence’ out of them, and such. (“It’s been sittin’ here for about half an hour, just lickin’ its chops”, a trapped crew member reports over the intercom at one point.)

What director Edward L. Cahn (who helmed far too many similarly action-packed b-pictures for me to even begin listing highlights here) and his collaborators give us with this one is in fact a nigh-on definitive exemplar of the Two-Fisted Sci-Fi ideal. Just a bunch of tooled up guys trapped in a tin can with a ravenous, bullet-proof beast - and if that ain’t enough to keep you entertained for 70 minutes, you probably should’ve tried the theatre across the street, mister.

Thankfully, our crew have set out on their journey into the unknown equipped with a crate of hand grenades, a wide variety of small arms, a cupboard full of experimental gas bombs and a bazooka (well, this is an American mission after all, I guess they needed the comfort factor). But, whilst their foresight in packing enough firepower to mount an assault on Colditz Castle may be vindicated by the fact that they’ve immediately encountered a blood-thirsty space monster, imagine their dismay when none of this stuff even slows it down!

Characters frequently say things like “I threw enough gas at it to knock out 67 elephants”, but still it keeps on comin’. They try electrocuting it, setting it on fire, even blasting it with radiation from the ship’s on-board nuclear reactor (of course there’s an on-board nuclear reactor), but to no avail. How will any of them make it back to earth alive? Well, I don’t want to give away the ending, but – just think ‘Alien’, and you’ll be on the right track.

If the movie I’ve described above sounds pretty corny, well, I suppose it is, but it’s certainly no less effective for that. Though clearly very much influenced by Hawks & Nyby’s ‘The Thing From Another World’ seven years earlier, Cahn & co simplified and streamlined that film’s actually rather complex and multi-faceted narrative, boiling it down to its basic essence and prioritising tension and man-vs-monster action over sub-text and thematics.

They were aided in this by, amongst other things, the fact that they had a way better monster suit to work with. Designed by Paul Blaisdell (Roger Corman’s go-to guy for this sort of thing) and inhabited by professional gorilla suit actor Ray ‘Crash’ Corrigan (who for my purposes is probably the biggest name on this film’s cast list), this thing is one mean bloody bastard of a critter, looking rather like the Creature from the Black Lagoon’s cigar-chomping, WWII vet uncle who opens beer bottles with his teeth. I daresay it must have really given some kids in the film’s original audience the heebie-jeebies, even as it sent others into paroxysms of delight.

Meanwhile, the film also boasts some pleasingly atmospheric photography and great, imaginative set design, realising the cramped, vertically levelled interior of the conical rocket ship in a physically believable manner which makes for a tense and challenging battleground upon which the men can engage the monster. (Having said that, I also loved seeing anachronisms like analogue clock faces, gas valves, mason jars and hand drawn blueprints making the journey into outer space, lending a defiantly low-tech vibe to proceedings, suggestive of a slightly re-tooled submarine movie.)

Cahn’s direction is snappily professional, and, sealing the deal, the cast – largely consisting of forgotten actors who I can imagine must have spent the ‘50s essaying hard-bitten corporals and/or small town posse participants – deliver a set of performances which are lively, engaging, and most importantly, entirely straight-faced.

A veritable model of filmmaking efficiency, ‘It!’ may not be the smartest atomic age sci-fi movie around (to put it mildly), but it’s certainly one of the most enjoyable and well-realised ventures in this vein that I’ve seen to date, however laughable the buck fifty model shots and pokey White House press rooms may be (got to love the ending, where the spokesman for the space programme returns to tell the world’s press, “eh, maybe we’ll just skip Mars”), and regardless of the hilarity the film’s unthinking misogyny is likely to evoke in modern audiences. As far as simple tales of scary monsters and the square-jawed spacemen who kick their behinds go, this one is tops. 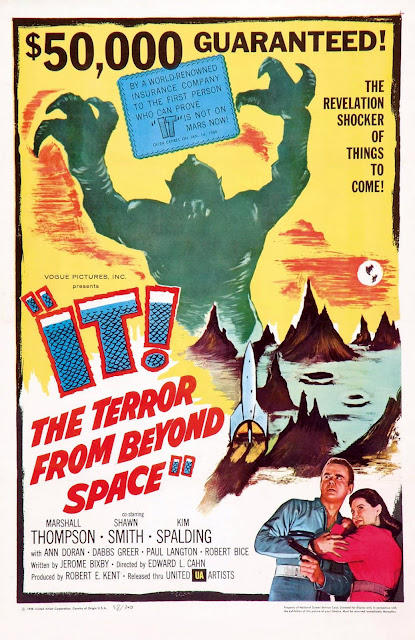 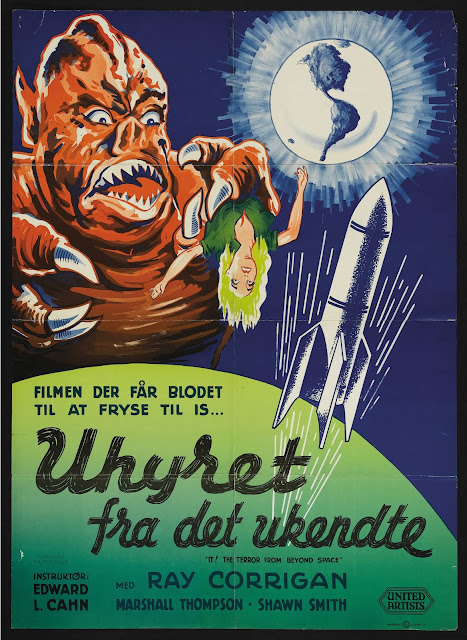 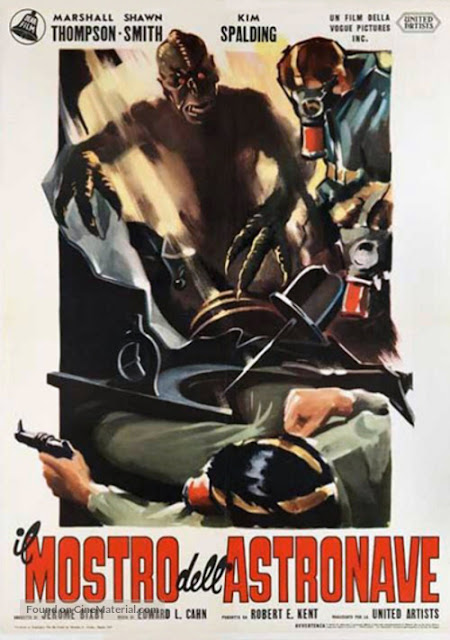