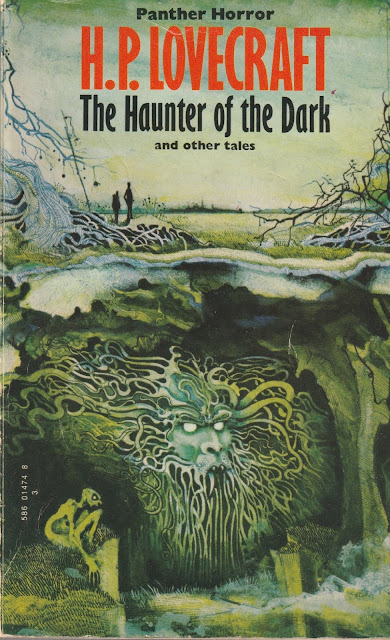 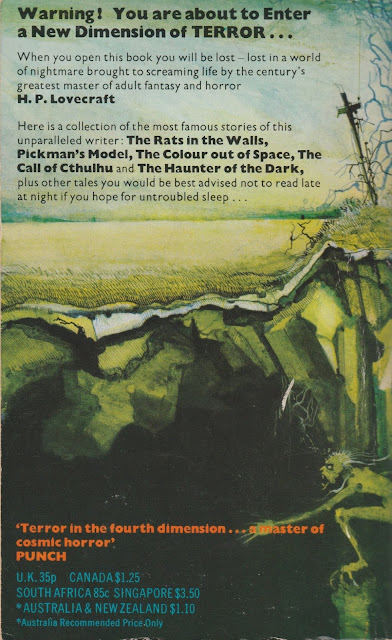 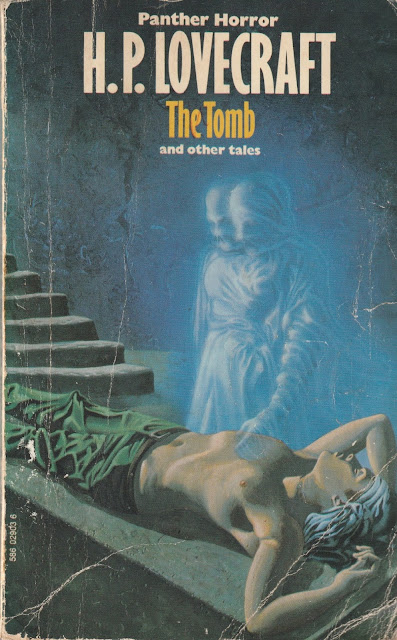 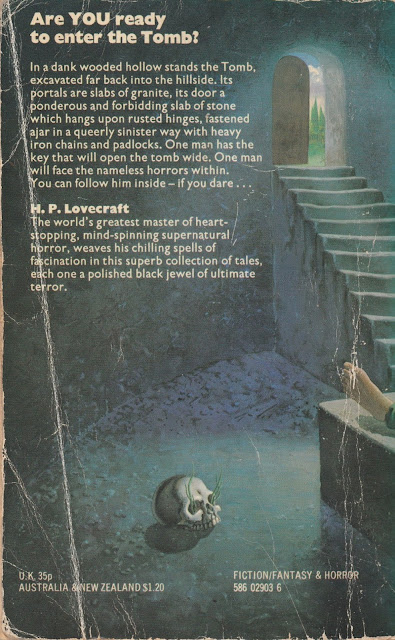 For reasons outlined in my previous post, I‘m unable to show off any vintage Lovecraft paperbacks which include ‘Herbert West: Reanimator’ amongst their contents, so failing that, now seems as good a time as any to share these scans of two rather battered remnants of Panther’s early ‘70s UK horror range, which I recently added to my collection.

Both are blessed with hugely evocative wraparound cover illustrations which I think capture the feel of the contents pretty well, in its own idiosyncratic fashion. The artwork for ‘The Haunter of the Dark’ (1972 printing) is unmistakably tbears the seal of the great Ian Miller (who is still working to this day, and was producing Lovecraft-inspired canvasses as recently as 2014), but an artwork credit for ‘The Tomb’ (1969 printing) sadly eludes me.

“It’s not often you get a Lovecraft for 20p,” I recall the lady behind the counter in Michael’s Bookshop in Ramsgate remarking, but a glimpse at the eldritch sigils inscribed upon the interior pages, together with their general condition, certainly helped justify this uniquely affordable price-tag. 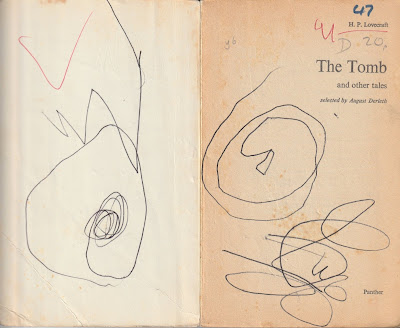 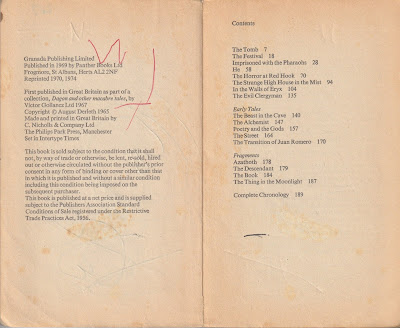 ‘Haunter of the Dark’ meanwhile is in slightly better shape, but still has a badly cracked spine, leaving pages ready to fly to the four winds as soon as some poor soul actually tries to read it. Ah well. Nonetheless, I’ve tried my best to take some scans of the full, wraparound covers, which can be enjoyed or downloaded by clicking on the images below. Apologies for the slightly blurriness on the ‘Haunter..’ scan – it was difficult to get it lined up on the scanner without further damaging the binding. 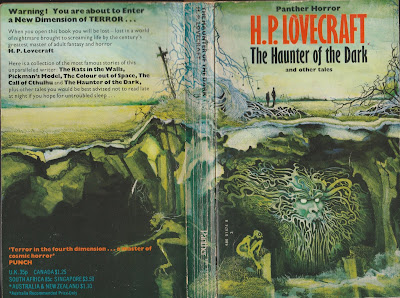 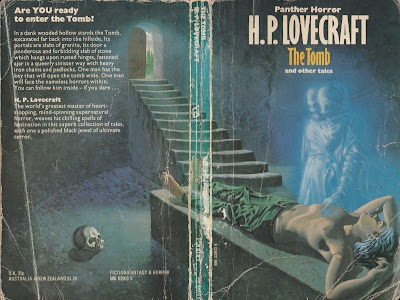 Ian Miller, one of my favourites. Him plus John blanche, classic lotr/warhammer/wwhite dwarf covers, plus British Horror = all good weird stuff!

Been meaning to get that new art book of Millers for some time now.

Yes, John Blanche! Good call! His artwork for Warhammer 40K had a HUGE impact on me as a kid/early teenager -- I remember staring at all those mad gothic sci-fi fantasias that filled up their rulebooks, thinking 'gosh, what IS that, I've never seen anything like it', etc.

He is/was clearly an incredible talent -- it's a shame in a way he's always been so closely tied to the Games Workshop brand, I'd love to see his work more widely recognised, and to see his imagination take flight beyond the limits of their world, etc...

Yeah, I totally agree that in some ways its a shame that Blanche has stayed strictly within GW, so he's not really stretched outside of those settings - although theres been some amazing work done within that, of course.

Recently he did a small project for himself and his acolytes called Voodoo Forest, which still shows that he's got it when he wants:

I mean, can you imagine Blanche being given full reign to have done some horror posters? Something like Hellraiser is right in his era, and just think what he (or Miller!) could have done with that brief....

Nicely found for 20p Ben, despite the condition - I have an eyepoppingly eldritch Panther copy of 'At the Mountains of Madness', could only be by the same cover artist; probably bought it for the same price, a long long time ago! Careful with those non-Euclidian hieroglyphs on the flyleafs by the way, don't stare too lon... Iä! Iä!