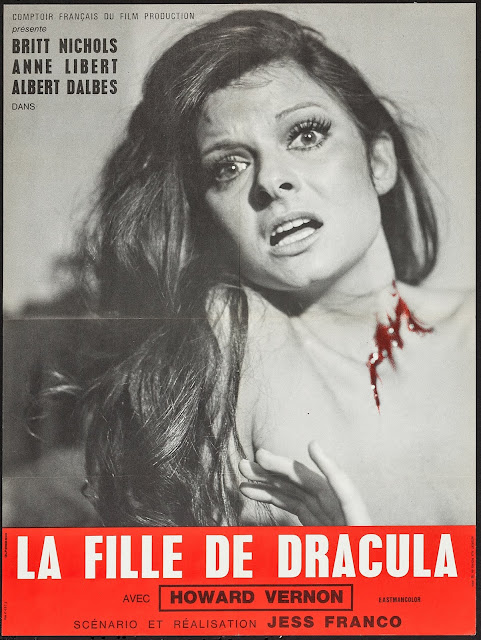 The early 1970s found Jess Franco’s restless creative spirit riding high in terms of both profligacy and artistry, hitting a peak of productivity that he would never again match (although the purple patch which followed his return to Spain in the early 1980s came pretty close).

According to the information compiled by Stephen Thrower for his exhaustive Franco filmography [see the link to his book below], no less than ten Jess Franco films were completed or released during 1971, with eight more to follow in 1972, including some of the director’s best (and strangest) work – ‘A Virgin Among The Living Dead’ (at this point still bearing it’s intended title, ‘La Nuit de L’etoiles Filantes’), ‘The Erotic Rites of Frankenstein’, Les Demons and ‘Le Journal Intime d’une Nymphomane’, alongside a steady stream of more forgettable quote-unquote “mainstream” pictures like ‘The Vengeance of Dr Mabuse’, ‘Un Silencio De Tumba’ and ‘Devil’s Island Lovers’. Suffice to say, the images which unfolded before our hero’s retina across these few short years would have been enough to send lesser men screaming to the asylum (hopefully that one from Lorna the Exorcist in which nobody wears any pants).

Amidst this frantic whirlwind of cash-strapped cinematic alchemy, it’s unsurprising that a relatively low key venture like the generically titled ‘Dracula’s Daughter’ - shot right in the centre of this exhausting period, in the early months of ’72 - could easily be over-looked. Generally regarded by Francophiles as a slight entry in the great man’s explosive early ‘70s catalogue, this one has often been seen either as a scrappy after-thought to the far wilder pair of monster-based horror movies the director shot a few months earlier (the aforementioned ‘Erotic Rites..’ and Dracula: Prisoner of Frankenstein), or else as a poor relation to his more striking and sublime vampire-sex epics, the earlier Vampiros Lesbos and the later ‘Le Comtesse Noire’ / ‘Female Vampire’.

A dismissive review in Thrower’s definitive Murderous Passions: The Delirious Cinema of Jesús Franco a few years ago would seem to have sealed ‘Dracula’s Daughter’s fate as an also-ran, but, returning to it recently after a period in which I’ve largely been forced to go cold turkey on my Franco habit, I actually enjoyed it a great deal.

Viewed in quick succession with the lunatic works which surround it in the director’s catalogue, I can understand that ‘Dracula’s Daughter’ might fade into the background, but hitting it up cold still gave me a pretty dizzying high – like a drink from a crystal clear oasis amid the arid desert of films not made by everybody’s favourite perverted Iberian hobbit.

As Thrower’s review discusses at length, the quote-unquote ‘plot’ here is indeed a back-of-a-badly-shredded-napkin bunch of nonsense, leaving character relationships and emotions / motivations flimsy and mutable in the extreme, and reducing the inevitable, exposition-clogged ‘police investigation’ segments to a meaningless bore, with Franco once again re-heating the same tepid leftovers from The Awful Dr Orlof that he’d return to endlessly in his horror projects over the years, for some godforsaken reason. But, such was my happiness at returning to the Francoverse on this occasion, I welcomed even these scenes, whilst elsewhere, more ambient pleasures of Franco’s filmmaking were all present and correct.

And as to the nature of that ‘thing’ they’re doing meanwhile, well, I won’t need to remind readers that Franco was a filmmaker who approached lesbian sex scenes with the same enthusiasm more conventional directors might reserve for a car chase or bank heist, and Nichols & Libert’s big number at the mid-point of ‘Dracula’s Daughter’ is a bravura sequence indeed, in spite of some rather plain photography.

Franco’s characteristic abstraction of the female body into fleshy fields of hill and valley is intercut here with footage of the director’s long-term friend and collaborator Daniel White playing the piano (the same one we see Howard Vernon tickling away on in ‘A Virgin Among The Living Dead’, I believe) with dramatic gusto, beneath glimmering crystal chandeliers. The composer’s lithe, drowsy explorations of suffocatingly romantic melodicism cast their spell as powerfully here as at any point in Franco’s cinema, helping transform this sequence into a pure, uncut dose of the director’s intoxicating artistry.

A later tryst between the two women, in which Nichols’ breasts rise in the foreground like mountains as Libert’s face writhes out of focus behind them and an incongruous ‘suspense’ cue plays on the soundtrack, is also remarkable for its sheer strangeness.

(White, incidentally, plays the role of the geriatric Count Karnstein in the film, and if you’re expecting an explanation of why a refugee from Sheridan LeFanu’s writing lives in Portugal and keeps Count Dracula in his basement, well… you’re watching to wrong movie here, frankly.)

Highlights elsewhere meanwhile include the way that the film pretty much opens with waves crashing upon some deserted beach, cutting to a crash zoom into an extreme close up of a female eyeball, followed by some trademark Franco in-camera weirdness as a woman stripping off for a bath in her hotel room fights to remain on-screen as reflections of the churning coastline, caught in some kind of balcony window that Jess appears to be shooting through, swamp the frame, to the accompaniment of a lugubrious dinner jazz cue. (She’ll soon be murdered by a roaming vamp we presume must be Count Dracula though, so no worries.)

Later on, I also enjoyed a staggeringly beautiful shot in which Libert strolls out across an ancient-looking stone balcony, observing the foggy coastal hills below; nothing special really, but something about the leisurely pace, the blinding sun shining across the water and Libert’s uncanny presence just struck me as a great little bit of Franco magic. (MENTAL NOTE: must book part # 2 of The Great Jess Franco Location Tour ASAP.)

Elsewhere, I also loved the Franco’s own role in ‘Dracula’s Daughter’, essaying the role of one “Cyril Jefferson”, Count Karnstein’s ‘secretary’ - a lank-haired, spaced out occult oddball who (in a distant nod perhaps to the plotting of Hammer’s 1958 ‘Dracula’) we eventually learn has taken the Karnstein job specifically in order to destroy the vampire menace. Prior to that however, he is happy just to infuriate Alberto Dalbe’s dour police inspector by turning up at random intervals to deliver unfathomable metaphysical pronouncements (“In the night the silence of death will surround us, interrupted from time to time by screams of horror; that’s the eternal law of mystery and terror”). Definitely one of the director’s best acting performances in a non-idiot role, and he even gets to wear a top hat in a few scenes, which is awesome.

Combined with the humid, wave-crashing atmospherics of Franco’s familiar coastal interzone, and the ceaseless chirping of sea-birds on the soundtrack, Cyril’s rolling stream of fervent blather (he even pontificates at one point about “the blood-drinking birds of death”, or somesuch) does a wonderful job of torpedoing Dalbe’s doomed attempt to hang on to some torn thread of rationality. He may persist with pottering about looking for alibis and forensic evidence, but we in the audience know it’s a lost cause – like us, he’s beyond Franco’s looking glass here, neck-deep in the primordial stew of this familiar holiday villa dreamworld.

On the horror side of things meanwhile, Howard Vernon may not have much to do as Dracula, but it’s still nice to see the old boy enjoying himself, in footage presumably shot simultaneously with ‘Dracula: Prisoner of Frankenstein’. He certainly has the same full-on boggling eyes / open-mouthed fangy grin thing going on here as he arises from his coffin in some dank basement, although Franco’s character seems to have stolen his top hat from the earlier film. (You could possibly argue that the use of wide angle(?) framing for these basement shots pays tribute to Karl Freund’s uncanny crypt tracking shots in Browning’s ‘Dracula’, but… it would be a push.)

Although The Count never gets a chance to get out and about in this one, he does at least get to roll around in his coffin with a kidnapped nightclub stripper whilst Nichols, as his ‘daughter’, nails down the lid - which was presumably a lot more fun than Christopher Lee was allowed in all those ‘Dracula’ sequels where Hammer insisted he spend his time skulking about in darkened basements.

In another example of Franco’s perplexing tendency to obsessively recreate the bad as well as good elements of his earlier films however, the lacklustre finale of ‘Dracula’s Daughter’ seems to echo that of his disastrous 1970 ‘Count Dracula’. Nonetheless, for what it’s worth, I’m pretty sure this is the first and only time I’ve ever seen Dracula dispatched by getting a stake between his eyes, and to be honest, if you’re still awake and sober enough to object by that point in proceedings, that’s your problem.

For some, ‘Dracula’s Daughter’ will seem like a gossamer thin veil of Franco mystique spread far too thin, betraying the exhaustion that his relentless early ‘70s schedule had led him to, and marking the point at which the thread of his “shoot first, ask questions later” approach (assembling new films out of footage stolen during shoots for other projects, essentially) finally snapped. For me here in 2019 though, it still served as a welcome reminder of the reasons why we (or at least, I ) have dedicated so much time and effort to following the star-dust trail of this man’s sensuous, mind-altering, defiantly irrational approach to filmmaking. (And, a few glasses of red wine probably helped too, TBH.)

As per Franco Files tradition, I’m obliged to conclude with a scorecard, and, after careful consideration, it looks as if ‘Dracula’s Daughter’ gets a straight run down the middle:

Excellent review. As a Franco addict, I find myself bereft of excuses for not owning this, and will seek out a copy posthaste!

I keep watching and trying..........but Franco's never clicked with me. Highly bizarre as on paper, its all there and should be exactly my kinda thing, but I've just not been really bitten by any of the Franco I've seen so far in the same way that someone like Rollin really hooked in and stayed there.

8-9 films and, yeah I kind of liked Faceless, but I'll keep watching them to see if something does it.

I shouldn't worry too much Maurice; although it can take a while to get into the groove with Franco (I think I must have watched about half a dozen his films before I first began to suspect they weren't just terrible rubbish), at the end of the day he's not for everyone. : )

I tend to think of directors like Franco (and Rollin, and Andy Milligan and so on) as being the cinematic equivalent of Captain Beefheart or The Fall or Sun Ra or something -- some people will just go NUTS for them, others will spend their whole life scratching their heads wondering what all the fuss is about; who can say why we end up in one category or the other?