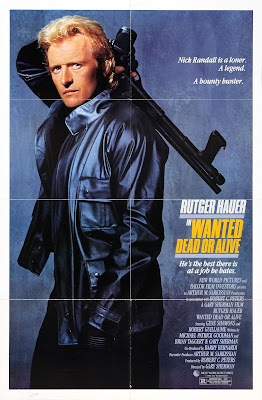 Like most people who like films, I was saddened yesterday to hear of the death of Rutger Hauer. Seventy five seems far too young for an actor who I’m sure could have rocked his way through old age with gusto.

A revered stalwart of what I suppose you might call the “Fuck yeah! [insert name here] is in this film!” fellowship over the past four decades, I am sad to see him go.

I’m aware of course that Hauer had a mighty rep as a serious actor in The Netherlands, particularly with regard to his regular appearances in Paul Verhoeven’s pre-Hollywood films, and his subsequent role in Nicolas Roeg’s ‘Eureka’, but, having not seen any of those films at the time of writing, I’m forced to admit that I know Hauer the same way most cult movie fans do: as an all-conquering b-movie beast of the ‘80s and ‘90s, seemingly ready to wield a machine gun and get a peroxide buzz-cut for anyone willing to hand him a cheque, and reliably dishing out a mess of scene-stealing bad guy / anti-hero business in the process.

A few highlights that immediately spring to mind include:

The Hitcher (1986) – Hauer plays the relentless, nigh on supernaturally efficient psychopath at the centre of Robert Harmon and Eric Red’s relentless, nigh on supernaturally efficient suspense thriller. Sadly, some kind of copyright wranglings or right-holder issues have seem to have led to ‘The Hitcher’ enjoying a lower profile than it deserves in recent years, but readers who have not seen it are urged to do what they must to track a copy down. They won’t be disappointed.

Split Second (1992) – Probably my absolute favourite bad ‘90s sci-fi movie, ‘Split Second’ features Hauer as an ultra-macho, rule-breaking cop with requisite trench-coat, mirror shades and obsession with “BIG FUCKING GUNS”, stalking his way through a flooded, dystopian future London which looks suspiciously similar to actual, 1992 London, eating greasy breakfasts in run-down bars and battling some kind of baffling conglomeration of elements borrowed from ‘Alien’, ‘Predator’ and… some random Satanic cult movie? Feeling very much like an unusually knuckleheaded ‘90s 2000AD strip brought to life, ‘Split Second’ is more fun than just about anything else I can possibly imagine, and, unlike ‘The Hitcher’, you can probably buy a beautifully restored copy for peanuts without even leaving your chair. Life is good!

Salute of the Jugger (1989) – To be honest, I’ve not actually seen this Australian post-apocalyptic sports movie(!), in which Hauer plays the lead alongside Joan Chen of ‘Twin Peaks’ fame, since the VHS era. I remember really enjoying it though, and I’ve recently acquired a copy, so look forward to re-visiting it. Maybe this weekend? Should work well with the hot weather, right? I can scarcely wait.

As readers will no doubt be aware, Rutger Hauer also memorably appeared in another sci-fi movie in the early 1980s, in which he delivered a striking, allegedly improvised, soliloquy on the nature of mortality which few have ever forgotten.

Something tells me one or two other obituaries may be liable to pick up on that one though, so… we won’t go the obvious route here. Let’s face it, you can probably all recite it by this point.


Thank you for that tribute. Allow me to indulge in a bit of Rutger Hauer-related nostalgic wallowing.

I know the conventional wisdom is that Hauer reached iconic status in Hollywood in the early-to-mid-1980s with ‘Blade Runner’ and ‘The Hitcher’ but then went into decline as he made increasing numbers of exploitation and / or straight-to-video movies. But wherever they figured on the quality scale, a huge number of his films were truly enjoyable. Before the supposed decline, there’s Nicolas Roeg’s ‘Eureka’, Richard Donner’s elegiac and criminally underrated ‘Ladyhawke’ and Paul Verhoeven’s delicious medieval gore-and-tits epic ‘Flesh + Blood’. I also like that he turned up in Sam Peckinpah’s final movie ‘The Ostermann Weekend’ which, while a mishmash of ideas, themes and styles, is still a blast because it features Peckinpah’s much-loved scenes of slo-mo carnage… and Rutger Hauer, John Hurt, Dennis Hopper and Meg Foster.

And as for his later films, I defy anyone to say a seriously bad word against Philip Noyce’s ‘Blind Fury’ or Lewis Teague’s ‘Wedlock’. I’m actually very partial to the latter film, which has Hauer escaping from a futuristic prison with an explosive collar around his neck and grappling with the sublimely villainous Joan Chen and Stephen Tobolowsky (who as the prison governor gets to utter the movie’s best line: “You nonconformists are all alike!”). As you say, Tony Maylam’s ‘Split Second’ is splendidly mad and I love how it allows Hauer to strut his stuff alongside craggy British character actors like Alun Armstrong and Pete Postlethwaite. Plus Kim Cattrall is in it, although I bet it isn’t given prominence in Kim’s acting CV these days.

I’m not a great fan of his supposed exploitation comeback movie, Jason Eisner’s ‘Hobo with a Shotgun’ in 2011, though with its medievally clad bikers and general 1980s-style trash aesthetic it looks now like a rough, cheap prototype for Panos Cosmatos’ ‘Mandy’. And I like the premise that Hauer’s elderly vagrant just wants to buy a lawnmower and start a grass-cutting business, but has to spend the whole film fighting against a family of murderous scumball psychos who are terrorising the city. Well, if you get between Rutger Hauer and his dreams of a lawnmower, you deserve to die.

One other reason I have for loving Hauer is that in the early 1990s he was the face of the advertising campaign for my favourite alcoholic brew, Guinness. Dressed in black, and sporting a shock of blonde hair, he did subliminally resemble a pint of Guinness. Indeed, when I went to see ‘Blade Runner: The Director’s Cut’ in a London cinema in 1992, there was a roar of laughter when one of his Guinness ads popped up before the main feature.

And dear old Freddie Jones died just a few weeks ago too. July 2019 has truly been a cursed month for my favourite actors.

Thanks so much for posting such a great tirbute here! It's much better than the one I managed.

Sadly, I have to confess I've not seen many of the films you mention (what can I say, I had a deprived childhood when it came to access to the VCR), but I'm confident that everything you say about them is probably spot on, and I look forward to catching up on the rest of the Hauer filmography as soon as the opportunity arises.

I likewise skipped 'Hobo with a Shotgun' - it just looked a bit too... shall we say, 'Troma-y'?... for my tastes, but you actually make it sound quite interesting, so maybe I should belatedly give it a shot.

Also - I had no idea Freddie Jones had died! That's terrible news, and I'm saddened that none of my usual sources informed me of this. ALWAYS, without exception, loved his performances - another name that instantly makes me happy when it pops up towards the end of a set of opening credits; he was one of thoose actors who could build a completely original character in about three seconds of screen-time. Just the other week, I was watching 'The Satanic Rites of Dracula', of all things, and thinking that the scene he shares with Cushing is about 500 times better than it has any right to be. R.I.P.


To be honest, there's a three-minute clip of 'Hobo with a Shotgun' on Youtube that contains just about everything that's amusingly inventive about the film -- particularly Rutger Hauer using a toaster to ward off an ice-skate-slashing psycho. Otherwise, it is, as you say, pretty Troma-y and very much a matter of taste. Not really my taste, unfortunately.

Regarding Freddie Jones, his death was easy to miss as reporting of it was heavily distorted by the fact that he'd appeared in 'Emmerdale' for the past 13 years. Many of the headlines were along the lines of DEATH OF BELOVED SOAP OPERA STAR, with scant reference to his remarkable film, TV and stage career. Actually, 'Emmerdale' has become something of a horror movie hang-out, as its cast also includes the venerable Patrick Mower from 'The Devil Rides Out' and 'Cry of the Banshee' and Dominic Brunt, director of 'Before Dawn' and 'Adult Babies'.

Yes, Freddie was wonderful in 'The Satanic Rites of Dracula'. I'm surprised that no black / doom / goth metal band has sampled his 'Evil rules' soliloquy at the beginning of a song: "Nothing is too vile. Nothing is too dreadful, too awful... You need to feel the threat of disgust, the beauty of obscenity...” Come on, Cradle Of Filth! Raise your game...

Rutger. I got messaged this whilst out with friends and was most upset at the news. Split Second was my choice of memorial film, as I'd rewatched Jugger not too long ago.

One of those who always cheers a film up.

And then find out about Freddie going too, the master of stealing a scene. There is nothing I enjoy more than the sudden appearance of Freddie in something, no matter how short or long. Think a watching of Goodbye Gemini is in order.

Yes! He was great in that one! I still only have '..Gemini' on a dodgy old VHS-sourced bootleg actually... definitely due for an upgrade and re-watch!