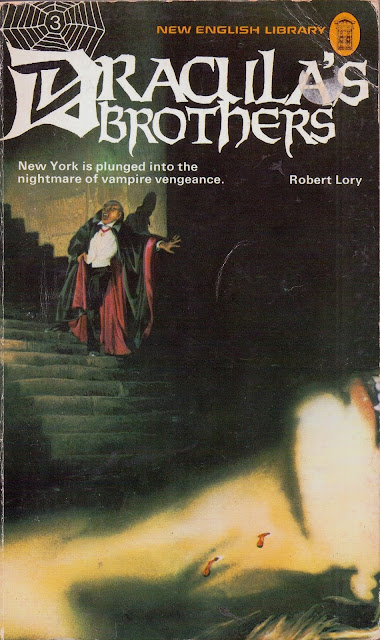 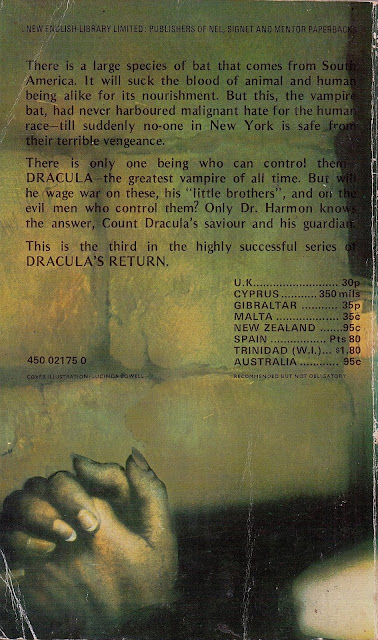 Until I picked this up somewhere the other day, I’d never heard of this series of Robert Lory 'Dracula' books. (This is the third in a series of five, following on from ‘Dracula Returns’ and ‘The Return of Dracula’, apparently.)

Once again, this is a reprint of a U.S. book, published earlier the same year by Pinnacle, and the book’s copyright notice bears the telltale name of ‘70s paperback kingpin and ‘Nick Carter – Killmaster’ overlord Lyle Kenyon Engel.

Despite this copyright however, Robert Lory was a genuine writer, and there is no reason to believe this is not his work, presumably written on spec for Engel's publishing operation.

Much like Marvel’s '70s 'Tomb of Dracula' comics, these books seem to feature Dracula running around getting into scrapes in the modern world, acting almost as a kind of sympathetic / super-heroic figure, whilst a bunch of human protagonists follow in his wake, trying to piece together the secrets of his power - insofar as I can tell, at least.

A quick skim read doesn’t suggest that there’s much in the way of atmos or strong horror content going on here, but there is a whole bunch of hoo-hah about Atlantis, a load of occult profanations, and lots of run-of-the-mill action / adventure / espionage type stuff, so…. what can I tell you folks, this thing looks nuts.