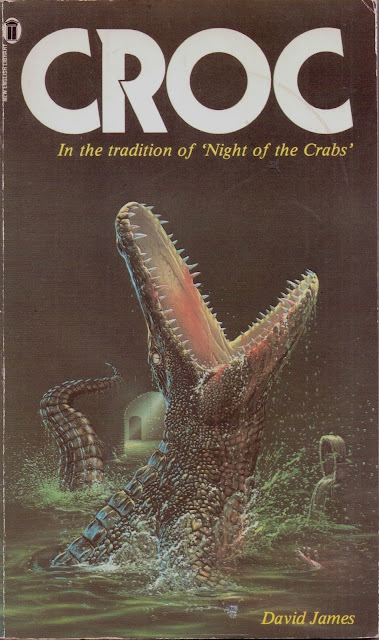 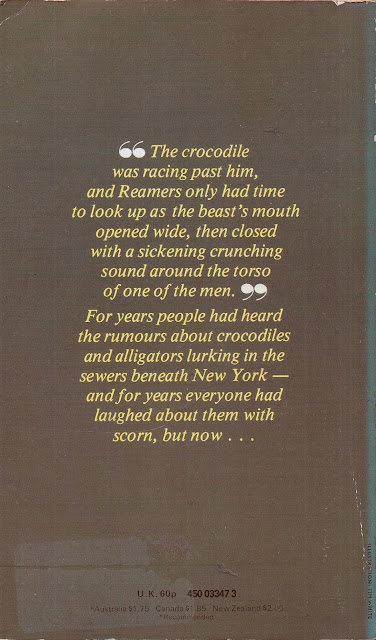 Officer Glenn Stapleton entered the precinct arrest and booking room with a black rubber boot filled with a badly mangled human foot and lower leg wrapped in his jacket. He had been ok riding across town with the grisly thing in the trunk of his car, but the sweat had popped out on his forehead when he carried it into the station, and now his stomach was doing flipflops, threatening at any moment to send him into dry heaves. Last night’s party wasn’t helping his situation much either, and he vowed, like he had many times before, not to do it again.

Given that this is a reprint of an American novel clearly modelled on the success of ‘Jaws’, I can’t get over the sheer gall of declaring it to be “in the tradition of ‘Night of the Crabs’”, given that NEL first published the latter book - by Shropshire-based author and rarely acknowledged BITR hero Guy N. Smith – in 1976, the same year that Belmont Tower released ‘Croc’ in the U.S. I mean, I don’t have the actual months of publication to hand, but that “tradition” must have taken root pretty damn quickly on both sides of the Atlantic, I suppose..?

CROC! I've got this one tucked away somewhere and have to say I thoroughly enjoyed it when I read it about 2-3 years ago.

Weirdly, I found it in the most bizarre of locations.....Homebase Wimbledon.

They used to have a charity bookshelf in there, which uncovered many many treasures (Satans Mistress, the tie in paperback of Corruption, only the almighty ZARDOZ paperback!) and has sadly been removed now the stores been closed down.

Was much like the glory days of Channel Five when you just didn't know what was gonna be on.

Sorry for the delay in replying Maurice, but, wow... Homebase Wimbledon?!

I'd probably have voted that "place in the UK least likely to contain amazing pulp paperbacks", but... goes to show you never can tell.

I didn't even know 'Corruption' had a paperback tie-in, but it must be pretty darn rare / collectible I'm sure!

There's an illustrator credit in very very small writing on the bottom right of your scan - Tim White.