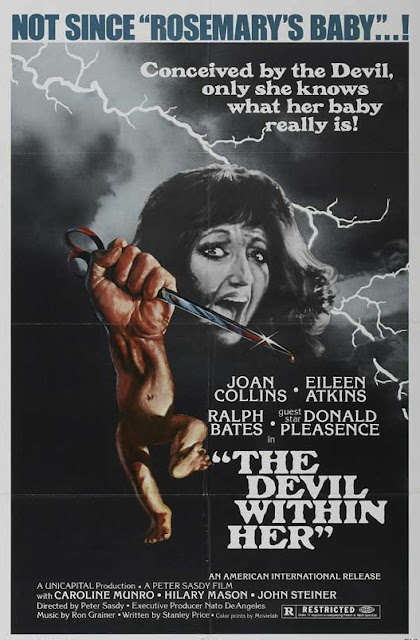 There is a lot to like about Peter Sasdy’s ‘I Don’t Want To Be Born’ / ‘The Devil Inside Her’ (I’m not sure which of those titles to go with really, either in terms of audience recognition, or my own personal preference).

For one thing, this is a quintessential “London in the ‘70s” film, with Kenneth Talbot’s nuanced and attractive photography and Sasdy’s confident direction helping to highlight all manner of glorious period detail, as the story veers uneasily between the gaudy middle class idyll of Joan Collins and Ralph Bates’ Chelsea townhouse and the seedy Soho strip club milieu within which Joan until recently made her living.

Like many New York films of the same era, it does a very good job of exploring the way in which the inhabitants of various, drastically different social strata (nuns and Harley Street doctors, high-flying young businessmen and ad executives, strippers and pornographers) must all find a way to co-exist within the same, imperfectly delineated urban landscape.

It’s all too easy to imagine the scummier worlds of ‘Death Line’ and Permissive living and breathing just around the corner, and the events of Sitting Target taking place just a short hop away on the tube.

The extravagant, almost barbaric period décor of the lead couple’s curtained living room is a thing of wonder to me – as is their none-more-70s approach to parenting, wherein the best solution to an infant’s violent behavioural problems is to lock him in his room and head downstairs for a stiff drink.
Indeed, these new parents spend so much of their time knocking back hard liquor that, to be frank, application of Occam’s razor might tend to suggest a simpler explanation for their troubles than demonic possession.

I was also delighted to see Bates visiting the same Italian food shop in Soho that I sometimes pop into to buy lasagne verdi sheets, and to discover that it looked exactly the same in 1975 as it does today.

And, I would also love to learn more about the place Collins goes to at one point for a tense meeting with John Steiner’s truly repulsive strip club owner. An indoor swimming pool – apparently also located in Soho – decorated with bright blue and green tiles, wherein visitors could apparently take a seat right at the edge of the pool and be served ham salad sandwiches and glasses of nut-brown ale by formally-attired waiters, whilst swimmers are splashing around right next to them. What a world of wonders this film is.

In terms of performances too, ‘The Devil..’ / ‘I Don’t Want..’ / whatever is great. Most notably, Donald Pleasence is on absolutely top form here as the family’s long-suffering paediatrician. He gets loads of screen-time, and does all that great Donald Pleasence stuff that we love so much. Along with ‘Death Line’ and ‘Wake in Fright’ in fact, I think this ranks as one of my all-time favourite ‘70s Pleasence performances.

Eileen Atkins, who plays a severe though enlightened Italian nun (Bates’ sister), also delivers an excellent performance, and her feisty academic discussions with Pleasance are one of the film’s highlights.

There is an extremely strange sub-plot about her continuing her program of scientific research whilst stationed in a London convent, which I’d imagine must have caused every single person who has ever watched this film to stop and ask themselves, “what the hell kind of Catholic Convent contains full laboratory facilities for carrying out animal experiments anyway…?!?”

No explanation is offered, and the film is all the better for such bizarre details, although I could have done without some brief footage of some bunny rabbits being given a hard time.

The sequences set in his club meanwhile are as lengthy, colourful, gratuitous and skeevy as furtive cinema-goers in 1975 may have demanded, representing perhaps ‘70s British horror’s most extended delve into this-sort-of-thing (although personally I still prefer the sheer, poverty-stricken weirdness of the equivalent scene in Norman J. Warren’s ‘Terror’ (1978), with Milton Reid as the doorman).

Oh yeah, and that reminds me! Caroline Munro is in this movie too, as Collins’ best friend and fellow stripper. Always nice to see her.

I’m not quite sure about the whole thing with Ralph Bates pretending to be Italian (did Franco Nero drop out at the last minute or something?), but again – his highly questionable accent is just another divertingly peculiar detail to throw on the pile.

Ron Grainer’s music is excellent too, particularly during the last few reels, when the movie spins way off into the realm of chaotic derangement in a manner I quite enjoyed.

So, yes – all of these things are good.

I just really wish, in my heart of hearts, that these things hadn’t all been used to tell a story about Joan Collins giving birth to a demonically possessed baby after being cursed by an evil, strip club compere dwarf named Hercules.

I mean… I don’t know how best to break this down for those of you who have never seen this film but… we’re supposed to believe that the baby scratches people’s faces with his little baby fingernails, and pushes babysitters into lakes. Later, he makes a break for it out of upstairs windows, climbs trees, swings ropes around people's necks, and disposes of bodies.

Hercules meanwhile struts around the place leering and jeering and occasionally arranging for his face to be super-imposed over footage of the baby, as if daring the relevant campaign groups to instigate a lawsuit. I don’t think we ever get much of an explanation as to why he has evil, Satanic powers and can curse unborn children, except that, well, he’s a dwarf, and he goes around leering and jeering, and such.

It’s….. all just absolutely fucking ridiculous, to be honest.

Based on the information above, I think you can probably make an informed decision on whether or not this is a film you would like to watch. Rest assured, if you’re leaning toward the affirmative, the movie revels in its own bad taste to such an extent that it’s got longer legs than Joan Collins as a jaw-dropping camp / comedy item, if that’s your bag.

Perhaps it’s just my own fault that I’m sitting here wishing that, on some level, it could have been, y’know…. actually good?

Frankly, I think I would probably have been happier watching a movie in which Joan and Ralph just sit in their magnificent sitting room getting plastered, and invite Dr Donald, and the nun, and Caroline Munro, and the sleazy strip club guy (but maybe not Hercules) over for an impromptu cocktail party.

It probably would have ended up with just as many bodies hidden in the back garden, but it would have been a lot more fun. 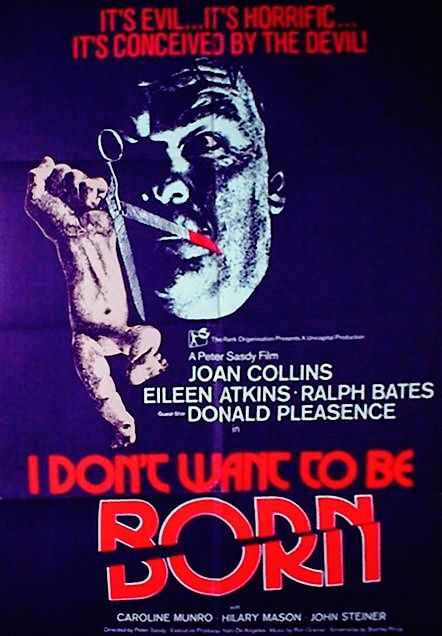 I think I’ve seem this maybe three or four times and still get it mixed up with “Persecution” from the previous year. Not a good film as far as I remember.

Curious, as I’ve usually got a fair degree of total recall for this sort of tat.

Joan......she’s kind of overlooked as a horror star really, isn’t she, as she had a solid run of genre pics in the 70s. Probably overshadowed by the fact she’s, well, Joan Collins!