Soul Pulp:
Shaft Among The Jews
by Ernest Tidyman
(Corgi, 1972) 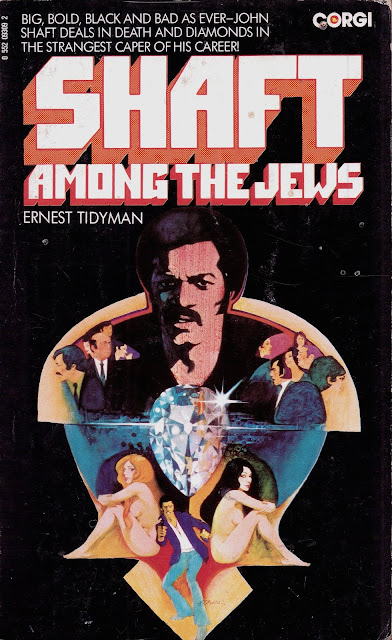 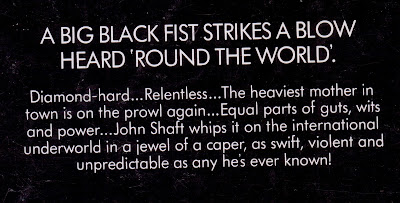 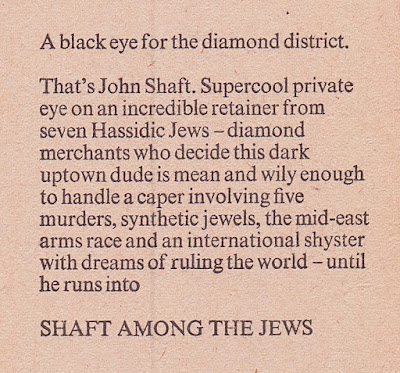 Adding to my small collection of blaxploitation paperbacks, we have what I believe is the second of seven Shaft novels written by the character’s creator Ernest Tidyman, and… yes, the title here’s a little on the nose, to say the least.

As anyone who has read much about mid-century New York will appreciate, the city’s working class Jewish community was still just as much of a marginalised, ghetto-bound culture as NY’s African-American milieu at this point, and underworld interactions between the two were generally characterised by a spirit of resentment and distrust, so… I don’t think the title and plot synopsis here indicate that Tidyman’s novel is inherently racist, but when it comes to a WASP writer addressing this kind of subject matter, the title is at best misguided, and it’s a safe bet that 21st century readers who dare venture between these pages are liable to encounter some pretty, uh, ‘salty’ content.

Believe it or not though, I didn’t just pick up ‘Shaft Among the Jews’ just in order to shock people by leaving it sitting on the coffee table – that symmetrical, proto-disco montage cover painting – attributed online to Fred Pfeiffer - is absolutely swell.

Oh, and I think we get a glimpse of Tidyman’s sense of humour via his dedication: