Bloody NEL:
The Making of Tania:
The Patty Hearst Story
by David Boulton
(1975) 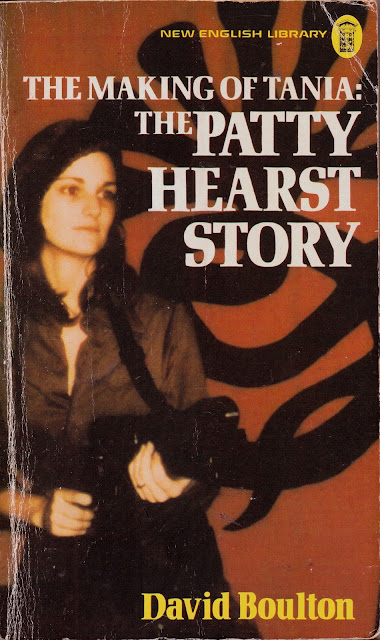 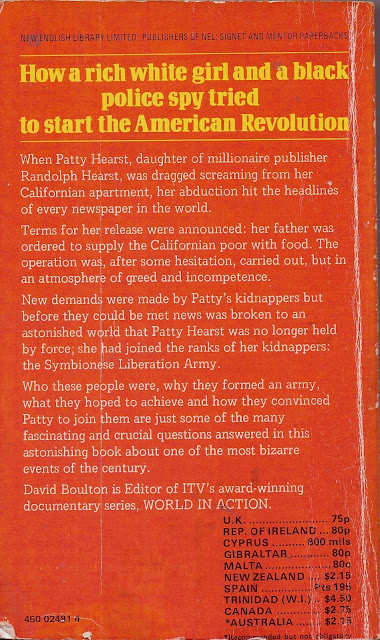 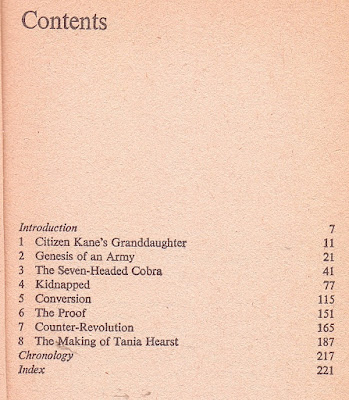 If I approached New English Library’s cash-in Patty Hearst book expecting the same kind of questionable laffs I extracted from their cash-in Manson book, disappointment was soon the result.

Perhaps having learned a thing or two since they entrusted their earlier true crime opus to a pseudonymous London-based hack channelling a fictitious Californian hipster, NEL instead assigned this gig to David Boulton, a legit journalist and broadcaster whose achievements to this date had included a book about Conscientious Objectors during the First World War and a history of the Ulster Volunteer Force.

As such, ‘The Making of Tania’ presents what I am inclined to believe is a fairly sober and credible overview of the facts as they stood at the time of writing, largely avoiding the kind of sensationalism I was expecting (and, to be honest, quite looking forward to), and resorting to speculation only when gaps in the factual narrative make it unavoidable.

Above all, Boulton’s book serves to remind us that, extraordinary though the Hearst case may seem when viewed at a distance, the deeper one digs into the details, the more senseless and depressing the events surrounding Patty’s kidnapping in February 1974 become. Tapping into the very dankest corners of America’s pre-Watergate darkness, it is a story that leaves almost everyone involved looking irresponsible, ineffectual and ultimately idiotic.

One of the most interesting aspects of reading a factual account written so soon after the events described is the huge holes that remain in the centre of the narrative Boulton builds from the sources available to him (holes that to a certain extent remain unfilled, or at least bitterly contested, to this day).

At the time of writing, the majority of the Symbionese Liberation Army’s core members were already dead, and the survivors (including Patty/Tania) were on the run, their whereabouts unknown. Unsurprisingly, none of them had stopped to give any interviews.

Whilst the SLA’s movements and activities could be pieced together with a reasonable degree of accuracy (more thanks to the efforts of the media than the police, it seems), the details of what actually transpired within the group – their personal relationships, the balance of power, decision-making processes, and the means by which the members (most of them fairly comfortable, educated, white twenty-somethings lest we forget) ended up being driven to such an extreme degree of fanaticism – all of these things were (and to a significant extent, still are) a complete unknown.

Although a substantial amount of space in the book is taken up with reproducing the SLA’s assorted communiqués and tape transcripts in full, this feels less like an easy way to fill pages, and more like a necessary decision on Boulton’s part. After all, these unedifying diatribes – so charmless, hypocritical and sickeningly self-congratulatory you’re forced to wonder how their authors could possibly have taken them seriously – represent the only insights we have into the thought processes of the people who are ostensibly the “main characters” of our story.

One can easily imagine the frustration that legitimate activists working for left-wing/socialist causes must have felt when these ridiculous, gun-toting bozos suddenly came out of nowhere to instantly dominate all media coverage of progressive politics, but, they could hopefully at least take some succour from the fact that the SLA saga also served to show the USA’s state and federal law enforcement agencies at their absolute worst.

Repeatedly, the authorities’ failure to properly secure crime scenes or follow up evidence led to them missing easy chances to apprehend SLA members (potentially without bloodshed), and, when they did eventually catch up with them – in a casual rooming house in Compton, South Central L.A. in which the bulk of the group had inexplicably taken up residence, apparently without making the slightest effort to disguise their identity – the resulting confrontation was handled appallingly by both the LAPD and FBI.

That no innocent bystanders were killed as the cops opened up with automatic weapons, smoke bombs and hand grenades in a heavily populated urban area, without even bothering to make certain that the buildings in front of them were free of civilians, is little short of a miracle. (Astonishingly, Boulton reports that at one point they were moments away from opening fire on the wrong house, until a passing child(!) informed them that the “white girls with guns” were actually behind them, on the other side of the street.) Would the Feds have behaved like this had the SLA chosen a more affluent white neighbourhood for their showdown? You tell me.

Likewise, the six SLA members within the house may have been armed, dangerous and deluded individuals, culpable for any number of crimes including several murders, but they did not deserve to die like dogs - shot down as they tried to flee, or left to suffocate in the basement of a burning building. Whilst I have limited sympathy for their half-baked ideology and misguided activities, the descriptions herein of their final minutes are enough to make any reader feel sick to the stomach.

I’d like to think I’m not the kind of person to automatically criticise law enforcement agencies without good reason, but reading Boulton’s note that the charred body of Camilla Hall – shot in the head by a police marksman - was found next to the skeletal remains of the Siamese kitten that had accompanied her since her pre-SLA days as a Berkeley drop-out, led me to share the anger of the Compton resident who subsequently spray-painted a perfect, elliptical epitaph on the side of a building overlooking the smouldering ruins: “IT TOOK 500 COPS…” .

Meanwhile, the evidence Boulton presents regarding Donald DeFreeze – aka ‘General Field Marshall Cinque’, de facto leader of the SLA – vis-a-vis the possibility that he was working as a paid informant and agent provocateur for a (no pun intended) “black ops” unit within the CIA right up to (and even beyond) his suspiciously hassle-free ‘escape’ from Soledad prison in 1973, is extremely compelling.

I’m not sure what info has come to light on this in subsequent years, and I’m aware that relying on a single source for something like this is always a mistake (particularly when the source in question is a 40+ year old New English Library paperback), but again, this is an instance in which the facts seem to speak for themselves.

DeFreeze was unaccountably acquitted of serious criminal charges (all involving firearms) on half a dozen occasions during his time in LA, and, when he finally ended up behind bars, he was allowed to practically walk out of a disused wing of Soledad, after Vacaville prison’s anarchic ‘Black Cultural Association’ programme had allowed him to establish personal connections with the unaffiliated Berkeley ‘radicals’ with whom we would later go on to form the SLA.

Again, you can do the math. Could this ‘wild card’ police operative – already noted for his schizophrenic tendencies and dangerous obsession with guns and explosives – have slipped his handlers and gone off-piste only when he realised the fun he could have leading a cabal of machine gun-toting white chicks, provided he could keep his “political” bullshit flowing well enough for them to buy him as a revolutionary Black Power guru..?

Thanks to the gusto of the police gunmen in Compton, we will never know whether or not ‘Field Marshall Cinque’ genuinely believed in the revolutionary ideals he espoused via the SLA’s propaganda, and, in fairness, Boulton doesn’t extend his speculation quite as far as I have in the preceding paragraph. But, it is certainly not beyond the realms of possibility that DeFreeze was deliberately placed within the initially harmless Berkeley milieu in order to inform on and incriminate its occupants... thus potentially making this whole sorry mess just another gift to the people, courtesy of the paranoid excesses that predominated within US law enforcement during the final years of J. Edgar Hoover’s tenure at the FBI.

Surprisingly, about the only person to emerge from Boulton’s book with any dignity at all is Patty’s father, Randolph Heart (the fourth son of William Randolph Hearst). Following his daughter’s kidnapping, Hearst went to great lengths to arrange meetings with representatives of organisations affiliated with the SLA, and announced, apparently in earnest, that his view of the world had been changed as a result of these discussions. He implemented the SLA’s demands for a vast public food programme about as well as he could within the prohibitive timeframe and guidelines the kidnappers had outlined, eventually sinking so much money into it that the solvency of his business empire was put in jeopardy, and he enraged the editorial staff of his newspapers by ordering them to re-print the SLA’s monotonous tracts in full, as they had demanded.

For these efforts, Hearst received nothing but abuse from all quarters, including from his own daughter. Given his impossible situation, one can hardly blame him for effectively washing his hands of Patty’s fate following the Compton blood-bath, and withdrawing from the public eye insofar as was possible. For this of course, he received yet more abuse – all of which leaves me feeling rather sorry for the poor guy, regardless of his nominally unsympathetic status as the multi-millionaire son of a notorious tyrant.

All of which, I realise, tells you very little about the aesthetic or editorial policy of New English Library, which is what I instigated this series of posts in order to discuss. But what can I say – as an example of no nonsense, long form journalism, ‘The Making of Tania’ proved an unexpectedly engaging read, blowing the dust off a series of now-historical events that I was broadly aware of, but had never really taken the time to read up on in this level of detail.

I hope I won’t need to derail this weblog into factual/, ‘true crime’ territory too often – rest assured, no icky serial killer fascination is forthcoming - but, like the Manson murders a few years earlier, the Hearst/SLA saga is a tale that has entirely transcended it’s historical context, becoming a key ingredient in the stew of the crazy culture that BITR exists to celebrate, and as such I find that freshening up my knowledge of the genuine article every now and then proves quite rewarding.