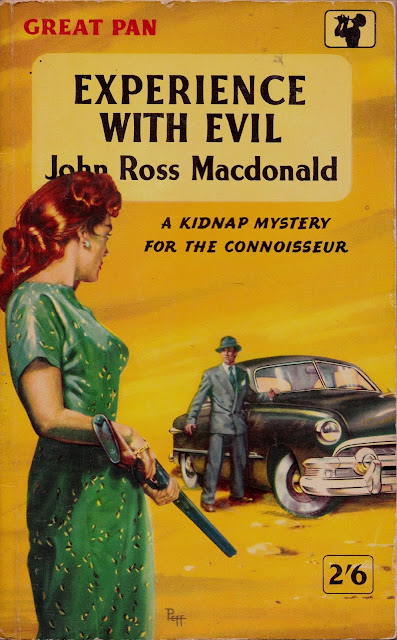 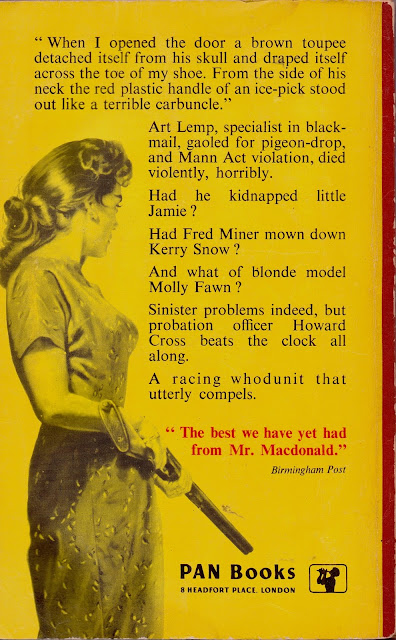 Over the past year or so, I’ve really been getting into the work of Ross Macdonald (he soon dropped the ‘John’, for whatever reason).

Coming on as if Raymond Chandler had knocked the ‘frustrated-literary-novelist’ bit on the head and settled into a routine of knocking out two hard-boiled thrillers per year, the Macdonald books I’ve read thus far have all been absolutely first rate, mixing up the requisite laconic humour and restless plotting with consistently sublime prose and an acute sensitivity for the tragic quirks of human nature, all baked in an atmosphere of creeping malaise and cynicism that is pure mid-century California noir.

If you’re into crime fiction and yet to discover Macdonald, doing so is an experience I can highly recommend.

‘Experience With Evil’ originally appeared in 1953 under the delightful title ‘Meet Me At The Morgue’, and though it doesn’t feature Macdonald’s signature character Lew Archer, I’m nonetheless confident that Pan’s blurb-ists weren't lying when they deemed it “a kidnap mystery for the connoisseur”.

The cover – by our old pal Sam “Peff” Peffer – is of an equally fine calibre (no firearms pun intended), and in fact, finding this book a few months back represented a rare quadruple win for my paperback collection: a great writer, great art, great condition, and a great price (£2). Satisfying!

I understand that he dropped the “John” to avoid confusion with John D. McDonald.

That makes a lot of sense. Thanks for the info John.