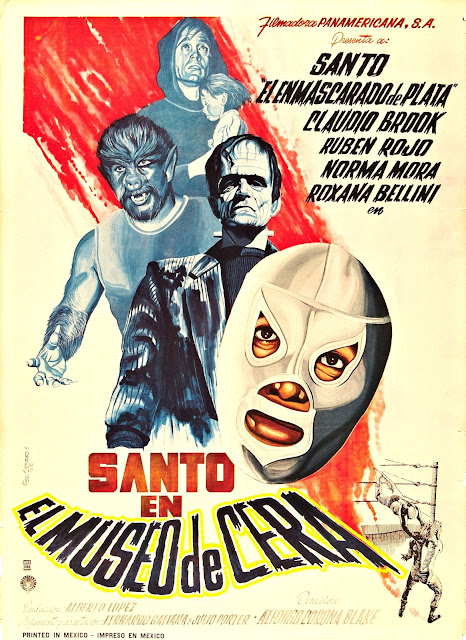 Ah, El Santo! Despite my occasional fondness for Mexican luchadore movies, it occurs to me that I’ve never actually written about any of them on this blog, so, ‘Santo en el Museo de Cera’ from 1963 should prove a pretty good place to start, right?

Well… as it turns out, I actually found the first half of this one a bit of a chore, sad to say. The Wax Museum Owner Guy – Dr Karol, played by Buñuel regular Claudio Brook - is initially more of a self-regarding blowhard than a scenery-chewing villain, banging on endlessly about how unfair it is that the police dare question a man of his stature about the assorted murders that have taken place in the vicinity of his establishment. He even goes so far as to recruit Santo to try to prove his innocence by “catching the real killer”, or somesuch. (I know this is relatively early in his crime-fighting career, but shouldn’t ‘El Enmascarada de Plata’ be dedicating his time to something a little more socially improving than clearing the name of some entitled asshole? Or punching some mummies, at the very least?)

Moreover, the wax museum itself seems like a bit of a shoddy affair too. Despite its owner’s grandiose claims, it is neither as grotesque nor as atmospheric as one might have hoped of a wax museum in a ‘60s Mexican b-movie. Furthermore, there is precious little action to be found between all the overly respectful yakking in the first 45 minutes here, unless of course you count the several lengthy wrestling sequences.

[I’ll readily admit that these are never a big selling point for me, beyond marvelling at all the flagrantly illegal moves that seem to have been allowed down in old Mexico. I don’t think that Greco-Roman purist chap from Dassin’s ‘Night And The City’ would have approved.]

But, this being a Santo movie, there are of course also some welcome eccentricities to enjoy along the way – not least the fact that Santo and his Important Scientist Friend apparently share an innovative piece of technology that allows them to “tune into” each other via giant TV sets in their respective laboratories, giving them a view of what the other is doing at any time of the day or night, even when they are nowhere near any kind of camera or receiving device.

Leaving aside its obvious technical implausibility, you’d think this arrangement might raise some questions about the nature of the relationship between Santo and his Important Scientist Friend, especially given that, to my knowledge, ISF appeared in no other Santo movies and is promptly killed off in this one, but… I’m sure we have better thing to do here than get bogged down in snarky over-think, so let’s just accept it and move on.

As Todd Stadtman observed when reviewing this film on his old Lucha Diaries site, poor old Santo actually cuts a rather lonely figure in this movie, and, aside from his televised chats with Scientist Friend, his life seems to revolve entirely around wrestling engagements, investigating crimes, and knocking about forlornly in his conspicuously empty and heavily shadowed lab. (No high-flying associates or glamorous lady-friends for our hero here.)

At this comparatively early stage in his movie career in fact, Santo’s parallel roles as wrestler and superhero don’t really seem as neatly integrated as they would later become, and, at several points in ‘..Museo de Cera’, he – adorably - says things like “I have some important new evidence that may reveal the identity of the killer, but, I have to go and wrestle now – I’ll tell you in the morning.”

Also of note here are the Wax Museum Guy’s hired goons, who command a great deal of screen-time, and perhaps justifiably so, as they are rare paragons of their much-maligned profession. Not only do the two turtleneck-clad heavies carry out their boss’s commands with remarkable efficiency and determination, they even manage to best mighty El Santo in hand-to-hand combat, stabbing him and leaving him for dead after a lengthy outdoor slugging match. Of course, he gets better, because he is Santo, but still – whatever Dr Karol was paying these two, it wasn’t enough.

They get their just desserts though of course, with one of the two getting dunked in a huge feeding trough of molten wax during a confrontation in Dr Karol’s secret underground lair – a welcome addition to the film’s final act that more than makes up for the longueurs earlier in the picture via the tried-and-tested means of going absolutely bananas.

Though the museum’s living mutant monsters may be a bit of an after-thought, they do become a little more interesting when we realise that – somehow or other – Dr Karol seems to be in the business of creating ‘Island of Dr. Moreau’ styled animal-men (he even gets a whip out at one stage to keep them under control, ala Charles Laughton in ‘Island of Lost Souls’).

None of this is really explored in much detail, but it certainly adds to the fun to have it all kicking off when Santo (finally) busts in on a nocturnal rescue mission to free the movie’s entirely unremarkable happy young couple from the depredations of Dr Karol, who by this point has happily dropped his earlier patina of uppity respectability and emerged as the ranting maniac we always knew he could be.

Much as you would hope, the villain’s secret lab/waxwork creation facility/whatever-the-hell-it-is is pretty awesome, complete with a towering gantry, steaming trough of molten wax and all kinds of quasi-Frankensteinian equipment, including what looks like a Tesla coil and a strange modern art type installation made of piled cylinders with circular lights fitted inside them.

As Santo, the aforementioned hired goons and the animated animal-man wax-monsters all start throwing down for the finale, this whole joint is trashed with great gusto, as Dr Karol meanwhile rants feverishly at the screaming heroine he has strapped to his operating table, pushing a film that has already upped its game to the level of ‘uproariously entertaining’ into the hallowed realms of pure delirium.

In the course of his ranting, Dr Karol reveals that he is in fact a survivor of the Holocaust, who, driven insane by the trauma of being subjected to Nazi tortures at Dachau, now seeks vengeance against the entire human race. “You may have heard about it, but you didn’t THINK about it”, he chides his victims. “Human beings are monsters,” he declares. “Those who tortured me proved it. I want your face to reflect what is in every human soul. I want to create a world of physically deformed beings, where one can see the face of the Apocalypse!”

Mere minutes of screen time later, Santo leads his two young charges unharmed from the smouldering ruins of the Wax Museum. Outside, the police have arrived just in time for an awestruck officer to exclaim, “Truly you are an admirable man, Santo!”

“I just believe in justice and fair play”, our hero curtly replies, before jumping into his convertible sports car, waving goodbye to everybody and disappearing into the Mexico City suburbs as the sun rises on the horizon, leaving the remaining mess of congealed wax, charred half-human corpses and malfunctioning electrical equipment behind for somebody else to deal with. God bless you, El Santo! 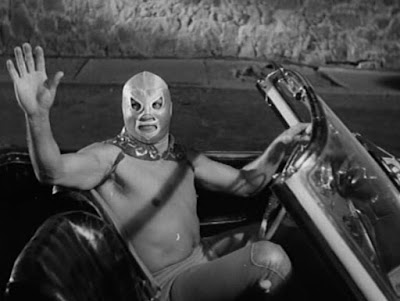 (Please note that all dialogue quoted in the above review is taken from a set of fan-subs, so it’s possible that it is not 100% reflective of the original Spanish, but I’m confident that it at least gives us the general idea.)