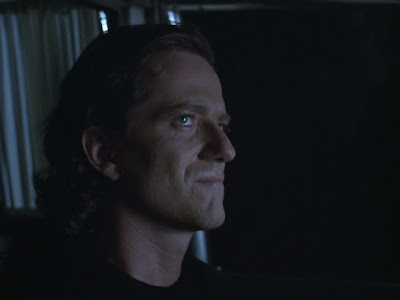 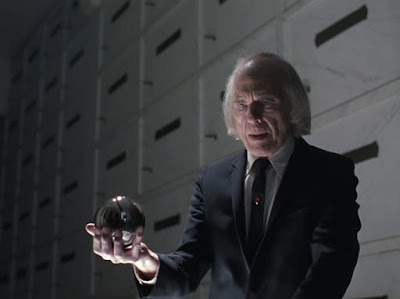 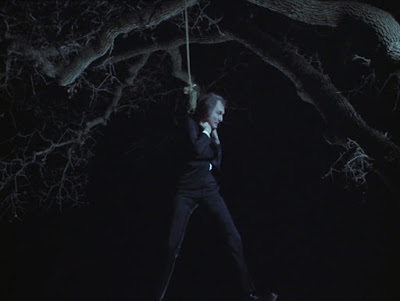 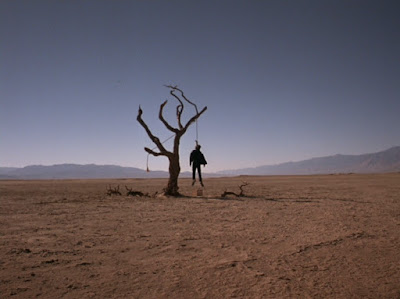 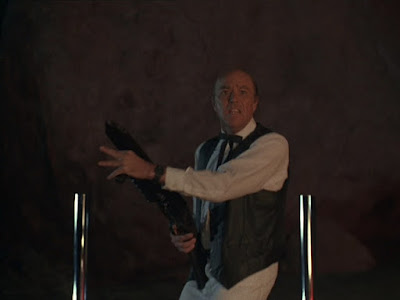 Whilst it takes a pretty determined miserablist to dredge up the unsettling sub-texts I have previously identified within the relatively upbeat environs of Phantasms II and III, the awkwardly named 1998’s ‘Phantasm: OblIVion’ is (forgive me) a whole different ball game.

With studio funding long gone, ‘OblIVion’ forcibly returns the series to its independent roots, as Don Coscarelli and his collaborators set about the production with what under most circumstances would be considered a prohibitively low budget.

Thankfully though, it is also clear that by this point Phantasm had become very much a “family affair”, driven on to a great extent by the camaraderie established over the course of the preceding three films. Reggie Bannister and his wife Gigi (both occasional dabblers in low budget film production) were heavily involved in a variety of capacities behind the scenes, whilst A. Michael Baldwin stepped up as ‘co-producer’ and, by all accounts, many veterans of the earlier films’ crew and effects teams waived their usual fees in order to take part.

As such, it makes sense that, whereas Phantasms II and III tried to pitch themselves as solidly commercial, stand-alone ventures - fun Friday night horror flicks for casual viewers, despite the complexity of their ongoing characters and mythos – ‘OblIVion’ by contrast is a film made purely for the fans.

Certainly, anyone who had the misfortune to come to the film cold must have found it absolutely mystifying, and even series followers who had become a bit rusty on the details of its predecessors must have struggled to acclimatise themselves, as Coscarelli shifts gears hard toward the more unsettling and surreal aspects of his 1979 original, detourning even the by now mandatory “setting the scene” flashback introduction sequence into a delirious, near-avant garde montage of old and new footage, far more concerned with obtusely symbolic imagery and general psychedelic disorientation that it is with the expected recapping of plot detail.

This more challenging approach remains consistent throughout the film that follows, and, though we get to enjoy the sight of the ever-faithful Reggie battling his new through a few conventional horror set-pieces, the bulk of the running time is dedicated the strange journey of Mike, who, trapped in the rear of a self-driving hearse, finds himself transported through the apocalyptic wasteland of the American mid-west to (where else?) Death Valley – The Tall Man’s chosen venue for what I suppose we must see as their final confrontation, pushing Mike on into what can only be described as a kind of trans-dimensional ‘vision quest’, as the boundaries of time and space become increasingly unstuck.

‘OblIVion’s ace in the hole when it comes to realising this temporal dislocation is that fact that Coscarelli – oft characterised by his colleagues as an obsessive hoarder of Phantasm-related props and materials – was apparently still in possession of a large quantity of unused footage shot for the original ‘Phantasm’ in the late ‘70s. Comprising a number of complete, lengthy scenes and numerous partial sequences, this allows for something in the region of twenty minutes of archived footage to be worked into the structure of ‘OblIVion’, intersecting with the newly shot footage in a more coherent and thematically appropriate manner than anyone might have anticipated.

So well does the older footage seem to compliment the new material in fact that, when I first watched ‘OblIVion’ a few years back, I assumed that they must have been deliberately re-staged, with lookalike actors standing in for the younger cast members, and thus spent much of the film marvelling at how flawlessly the effect had been achieved.

Returning to the film in the knowledge that the ‘70s footage is genuine however, it becomes clear that the ‘90s footage has to some extent been shaped by the imagery provided by the unused ‘Phantasm’ material, which in turn gains new significance in the context of the new story that now surrounds it, leading to the creation of a very weird symbiotic feedback loop between the two eras that could swiftly make a film theorist’s head hurt pretty badly, should they deign to spend any length of time thinking about it.

Certainly, seeing actors apparently interacting with themselves playing the same role twenty years earlier is a fairly unique prospect in cinema, and watching A. Michael Baldwin ricochet between his early teens and mid ‘30s from scene to scene proves particularly unnerving – especially given that his extended dialogue and metaphysical tug of war with Angus Scrimm’s Tall Man seems to continue, uninterrupted, through both time periods.

To some extent, Mike’s younger self seems to represent his “spirit self”, fighting an astral battle with The Tall Man, just as his older self physically combats his minions in the material world. There is a suggestion here that, in his mind, Mike is still the kid we met in the first ‘Phantasm’ film, still inhabiting the suburban idyll of California 1979. To him, the subsequent years of incarceration, hospitalisation, imprisonment and the occasional fiery show-down simply haven’t happened, as The Tall Man still looms over him, blocking his path to adulthood.

In this context, the disturbing imagery of the famous “hanging tree” sequence – a wisely unused alternative ending for the original ‘Phantasm’ in which the teenage Mike ensnares The Tall Man in a noose and is subsequently sweet-talked into cutting him down – feels far more potent and suggestive than it would have been in its original context, where the fable/fairy tale-like quality of the dialogue would have rendered it a fairly ridiculous conclusion to the first film.

Here though, teenage Mike’s curious decision to cut down/release his antagonist highlights the strange symbiosis that exists between the two characters – especially when the scene is directly mirrored by one in which The Tall Man steps in the prevent the adult Mike from hanging himself in Death Valley.

Throughout ‘OblIVion’ in fact, Mike’s actions seem to echo those of The Tall Man. Not only are both of them hanged, and subsequently saved by each other, but both are pictured holding spheres aloft in a strikingly similar fashion, both turn to the camera, assuming blank and baleful expressions, before stalking through the film’s ever-present dimensional gates, and so forth.

Are we meant to assume that the two characters are becoming closer together, as Mike prepares to merge with, or supersede The Tall Man? Or, is Coscarelli simply reminding us that they have in fact been one and the same all along – The Tall Man drawn from somewhere deep within Mike’s troubled psyche, gradually consuming him, just as he has consumed the American landscape against which their battles take place?

As the “hanging tree” scene demonstrates, Mike needs The Tall Man to fight against, just as much as his enemy needs him. His journey through the ‘chapel perilous’ proposed by the first film has failed, and the shock of facing life without the spectre of a supernatural opponent to take the blame for his troubles has proved too much for him to bear.

Elsewhere in ‘OblIVion’, viewers still hoping for a more conventional “explanation” of The Tall Man and his machinations are granted some imaginative insights into his background, as Mike’s journeys through the dimensional gateways take him, surprisingly, back to the Civil War era (furthering the very American Gothic sense of history that has always underpinned the Phantasm series to some extent), where we learn that our favourite towering ghoul was once a field surgeon and mild-mannered old coot named Jedidiah Morningside, whose Frankensteinian experiments took him through one of the dimensional portals. (Also, he apparently lived with the fortune teller from the first ‘Phantasm’, because… hey, why not?)

Naturally, all this kept as ambiguous as ever; we never learn what happened to poor old Jedidiah when he stepped through the gate, how long he was away, or the nature of intelligence that was seemingly inhabiting his body when he returned – although we may at least assume that, whatever happened, a similar fate is in store for Mike.

Needless to say, ‘OblIVion’ is a rather oblique film to say the least, returning very much to the shifting sands and Poe-esque phantasmagoria that played into Coscarelli’s original conception of the Phantasm series.

Working as much on a purely emotional / imagistic level as a narrative one, the film often feels more like a meditative reflection upon (or extended remix of) the earlier instalments in the series (and the legacy of the first film in particular) than a story in its own right, framing even its remaining action scenes (of which there are, actually, plenty) within a cracked, quasi-mystical framework that purposefully holds back on any kind of answers.

All of this is fully embodied by ‘OblIVion’s ending, which is, I think, my favourite moment in the entire series, bringing us to the end of our characters’ long journey with a curtain call both wordlessly poignant and – as per Phantasm tradition – heroically unresolved.

Like the haunting, unreadable expression Angus Scrimm offers us as he disappears through the dimensional gateway one final time, this is one of those movie endings whose power is difficult to meaningfully convey in words. All that’s left to do really is merely describe it, and hope some of the feeling comes across.

As the adult Mike’s bodily form lies dying on the sand, a sphere-shaped hole in his head, Reggie, wearing his old ice cream seller’s uniform and wielding his quadruple-barrelled shotgun, takes one anguished look back before launching himself through the dimensional gates in pursuit of The Tall Man. Reggie, by this stage, has become an iconic avatar of himself – a deathless video game protagonist, doggedly embarking upon an eternity of fruitless, Doom-style adventures in search of his friend’s stolen soul. “I was an ice cream vendor by trade, but now I am a solider”, he opined during the film’s opening narration, and now he’s ready to play that role to the bitter end.

As we zoom in on Mike’s blank, dilated pupil, we return to 1979. Young Mike, looking despondent as ever, walks down an empty street, until Reggie stops in his ice cream truck to give him a lift. “Did you hear something, partner?”, Reggie asks as they drive along. “It’s only the wind… just the wind…”, Mike replies as he sheds a tear. The ice cream truck is now travelling through a formless black void; the outside world has disappeared. The last thing we see are the truck’s red tail-lights fading into the darkness; then the theme music hits and the familiar writer/director’s credit appears, in the exact same shade of red.

Whilst I don’t begrudge the existence of a fifth Phantasm film (Coscarelli’s creation is by design a never-ending, ever-changing beast), I think most fans can agree that this is the true end to the story we have been following through these four films, and, for me personally, it is also one of the more inexplicably devastating few minutes of cinema I’ve seen anywhere. 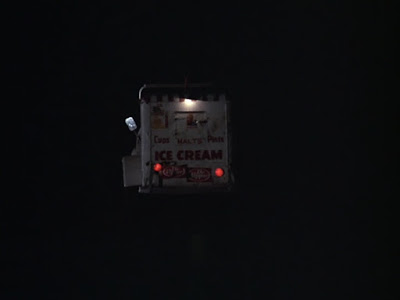