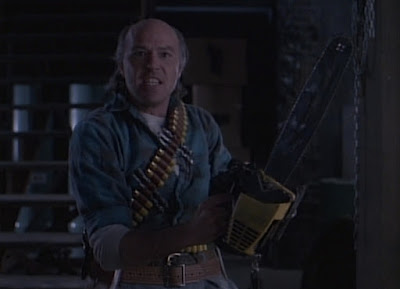 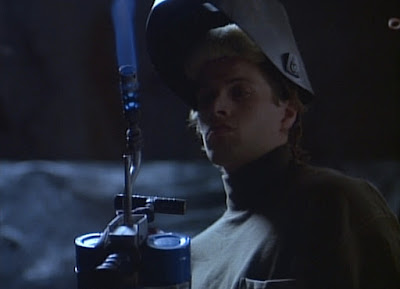 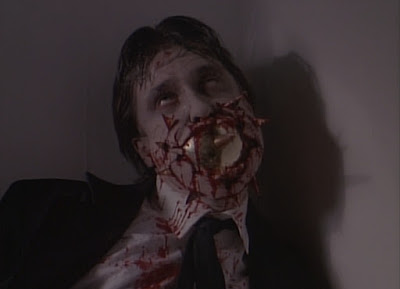 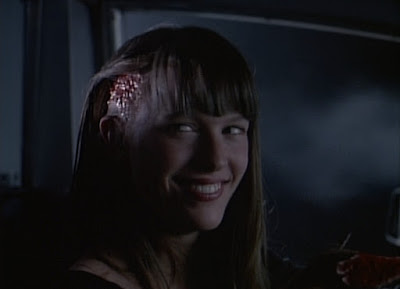 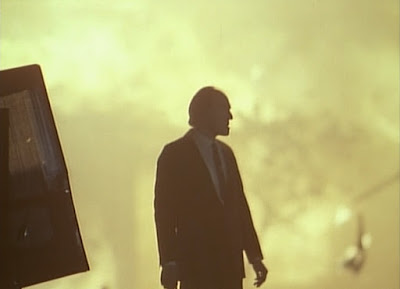 When I first ploughed my way through the sequels to ‘Phantasm’ a few years back, I enjoyed them all as entertaining, well-made horror/action/comedies full of cool ideas and likeable characters, but at the same time, I was disappointed by what I saw as writer/director Don Coscarelli’s failure to follow up on the more emotionally resonant sub-texts of the first film. Instead, he seemed to have concentrated his efforts on more audience-pleasing stuff like stunts, practical make-up/gore effects and fantasy world-building, enjoying the comfort of his own hit franchise - and, in fairness, why shouldn’t he?

Furthermore, watching parts II, III and IV in quick succession, the films’ deliberately cyclical (detractors may claim, “repetitive”) scenarios - wherein the familiar elements of dwarfs, spheres, mausoleums, graveyards, dimensional gateways, dead towns, hitchhikers, hearses etc are shuffled around like self-generating levels in a video game – caused all three to blur together to a certain extent, making it difficult for me to really get an angle on each individual instalment, which didn’t exactly help matters when it came to keeping my (ahem) ‘critical faculties’ on-point.

Having recently revisited the sequels however, I now believe I had considerably underestimated them. Not only are they all excellent films in their own right, adding weight to the argument that Coscerelli is one of the most talented and undervalued directors working in the realm of American genre cinema over the past few decades, but, upon closer scrutiny, they also all retain glimpses and reflections of that certain *something* I valued so much in the first Phantasm, reframed and repurposed for each film in much the same manner that The Tall Man’s manipulations of reality constantly shift the goal posts of the story’s surface level narrative.

Somewhat surprisingly in retrospect, 1988’s ‘Phantasm II’ was entirely bankrolled by Universal - the result of a short-lived studio head with a yen to build up some Freddy/Jason-rivalling horror franchises, I gather – and as such, it is by far the most generously budgeted and commercially inclined entry in the series.

Although the studio’s insistence on re-casting A. Michael Baldwin’s character in the more conventionally handsome form of James Le Gros is an regrettable blot on the series’ copybook (allegedly Coscarelli was told he could have either Baldwin or Reggie Bannister back, but not both), this budgetary upgrade otherwise works out rather well. I have seen ‘Phantasm II’ described as ‘Aliens’ to the first film’s ‘Alien’, which seems an apt comparison.

Certainly, we’re looking here at a full scale “this time it’s war” type proposition, with a fully tooled up Reggie and Mike back on the road in the now iconic Hemi Cuda, ready to avenge themselves against The Tall Man by means of flame, bullets, explosives, power tools and anything else that comes to hand - resulting in a thoroughly satisfying rampage of ‘Evil Dead’-indebted action-horror splatter that pulls a pure 180 on the more reflective tone of the original film.

Before that all gets underway though, this initial sequel actually opens in a manner very much in keeping with the thematic schema underlying the first film. Following a prologue that sets the pace for the flashback-heavy “plot recap” montages that open each subsequent Phantasm instalment, the basic gist here is that a now fully grown Mike has been released from a long spell in a psychiatric institution following the events of the first film, but he remains secretly fixated with tracking down and battling The Tall Man, to whom he still feels some kind of psychic link.

Reg, as Mike’s only remaining friend and guardian, looks upon him with pity. For Reg, it seems, has successfully made it through The Tall Man’s ‘chapel perilous’ – tragically, the only point in the series in which any of the central characters succeeds in doing so. Having graduated to a quiet, adult life with a beloved family and a steady job, he nervously dismisses Mike’s tales of The Tall Man as a paranoid delusion, hoping to snap his unfortunate friend out of it.

But, Universal weren’t coughing up the dough for Coscarelli to make a bittersweet comedy about Reggie Bannister helping his institutionalised buddy readjust to everyday life (hey, I’d watch it), so naturally this state of affairs can’t last for long.

Arguably, the gas leak and subsequent spectacular explosion that soon takes Reggie’s family and home from him can be read not so much as the handiwork of The Tall Man’s evil powers, but simply as another meaningless, random accident – no different to the one that took Mike’s family from him before the start of the first film.

When Reg sees the unmistakable shadow of Angus Scrimm stalking from the flames, it simply signals that, in the face of his shock and grief, he has suffered a massive relapse, allowing the world of The Tall Man to once again form itself around him, becoming his primary reality.

When, in one of ‘Phantasm II’s key scenes, Reggie and Mike break into a hardware store to stock up for their forthcoming quest for vengeance, revelling in the simple pleasures of modified shotguns, chainsaws and DIY flamethrowers, we are encouraged to see it as a triumphant moment; our heroes are back and they’re gonna kick some ass!

On another level though, it is deeply sad. Unable to move on from his loss, Reg has resorted to simply wallowing in the adolescent fetishes that he and his friends built their lives around in happier times, taking them to a dangerous new level of obsession, whilst Mike – whose own troubles have never allowed him the chance to grow beyond them – merely encourages him.

From this point on, the Phantasm series can easily be read as a tragedy.

With The Tall Man foremost in their minds, our protagonists’ world becomes a foreboding, apocalyptic place. The suburban idyll in which Reg, Jody and Mike made their home in the first film has literally collapsed and died in the wake of The Tall Man’s passage, and, the harder our heroes fight back against him, the darker things become for them; the further they get from understanding what is happening to them, from finding peace or from developing any kind of meaningful human relationships.

(It is certainly no coincidence that, each time Reg or Mike become involved with a female character, the arc of their relationship dive-bombs into death or betrayal almost immediately – a state of affairs that, in Reggie’s case, becomes a running joke through the subsequent sequels.)

If The Tall Man is indeed an avatar of death, aging, and fear of one’s own mortality, what can possibly be achieved by attacking him with bullets and hand grenades? As any bereavement counsellor will tell you, grief can never be overcome whilst sufferers persist in trying to fight against the circumstances that have befallen them; it’s all about accepting, and moving on, and all that jazz.

Whether Reggie and Mike simply fail to realise this, or else are consciously taking on the “doomed hero” mantle by refusing to surrender to it, is up for debate - but either way, they are questers of a chronically doomed stripe. The harder they struggle, the longer they search for answers - and the more we in the audience laugh and cheer with them on in their exploits - the stronger and more omniscient their enemy becomes… and the further they stray from finding happiness or meaning in their increasingly barren lives.