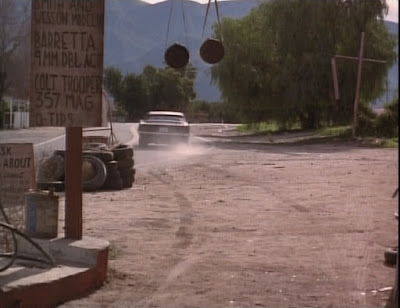 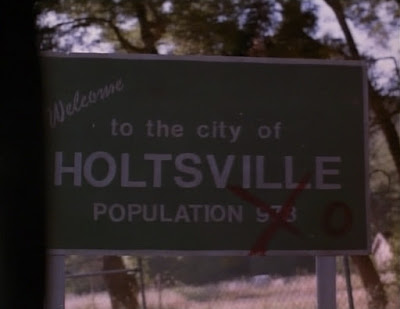 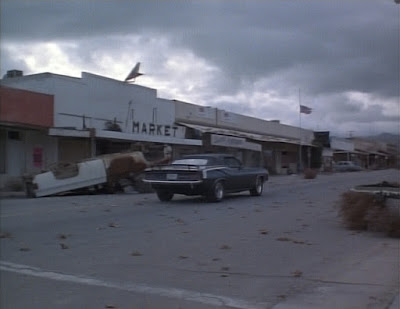 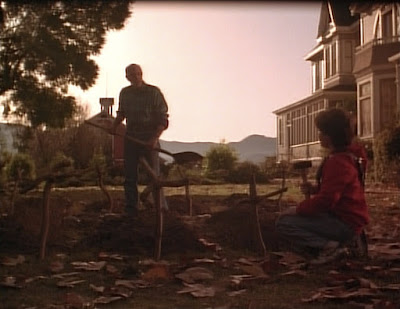 Before moving on to part IV, I’d like to spend some time discussing one of my favourite aspects of the ‘Phantasm’ series, which I have only mentioned in passing in my earlier posts - namely the increasingly apocalyptic nature of the world in which the films’ primary action takes place.

Rather than sticking to the “weird stuff happens in a familiar location” set up of the first film (which would certainly have seemed the default setting for an ‘80s/’90s horror landscape dominated by Stephen King adaptations, slashers etc), the creeping realisation across Phantasms II, III and IV that The Tall Man is actually in the process of destroying the world - transforming it into a hostile and barren place - is both surprising and beautifully handled.

Post-apocalyptic themes are rarely in the forefront of the films’ storylines (though they were clearly on Don Coscerelli’s mind, as evidenced by his little-seen wilderness survival epic Survival Quest (1988)), but they increasingly define the background against which each subsequent movie unfolds, eerily mirroring the protagonists’ fixation with self-sufficiency and improvised weaponry.

As Mike and Reggie pursue their battle against the Tall Man in a monomaniacal, “you and me against the world” sort of fashion, the issue of what is actually happening to that world becomes merely a side detail, leading to a peculiarly slow, almost incidental ‘End of the World’ narrative that few other filmmakers have had the opportunity to realise over the space of several decades.

It is in Phantasm II that we first see the end result of The Tall Man’s intervention in a community, as our heroes track him from California to the American North-West, where, we are told in voiceover, that he has left a trail of small towns decimated in his wake – their populations vanished (presumably ‘harvested’ to provide raw materials for his dwarfs and spheres) and their streets fallen into ruin, with residents of neighbouring areas rationalising the resulting ghost-towns as the result of closed factories, vanished industries and so forth.

In a sense, this notion both looks back to the ‘dust-bowls’ of the Great Depression, and forward to the process of depopulation that has struck cities like Detroit in recent years, but I like the way that this idea reframes The Tall Man as a kind of itinerant ‘plague-bringer’ figure – an industrious colonial cousin of Murnau’s Nosferatu, perhaps.

By the time we reach ‘Phantasm III’, it seems as if huge swatches of the Mid-West and Pacific coast have become an uninhabited no-man’s-land, frequented only by armed vigilantes (Gloria Lynne Henry’s Rocky and her short-lived friend), criminal scavengers (John Chandler and his unsavoury buddies) and lone, besieged survivalists, defending their territory against left-over remnants of The tall Man’s sentinels and creatures that seem to swarm at night like lost bees in search of a hive. (Kevin Connors’ Tim, when we first meet him, is living like a pre-teen equivalent of the protagonist of Richard Matheson’s ‘I Am Legend’.)

When Reggie subsequently tries to ditch Tim at a safe location before moving on, we find the pair visiting a rural, roadside homestead where a friendly lady has (along with some other people, we must assume) effectively set up a refugee camp for orphaned children displaced from the blighted towns in the surrounding area. Again, an interesting and somewhat chilling exploration of an aspect of societal collapse that more testosterone-fuelled post-apocalyptic cinema rarely makes time for.

Next up, 1998’s ‘Phantasm: OblIVion’ takes things one step further – partly, it must be said, as a result of a miniscule budget that sees the series’ four principal actors joined by only one other character with a speaking role.

By this stage, even the buildings seem to have disappeared from the landscape, as Reggie’s journey from the Mid-West toward a reunion with Mike in Death Valley sees him traversing a featureless desert wasteland worthy of a Mad Max movie. The only living(?) creatures he encounters along the way are a demonic/zombified State Trooper, and a too-good-to-be-true damsel in distress (played by Heidi Marnhout) who is soon revealed to be precisely the kind of sphere-implanted honey-trap anyone but the ever-hopeful Reggie may have suspected from the outset.

On first glance, these episodic encounters seem completely arbitrary – stand-alone horror/action set-pieces thrown in to liven up what is otherwise a rather sombre and contemplative movie – but nonetheless, I rather like the impression they create of a totally desiccated American landscape, in which the only things still moving are deadly, mutant predators – weird, left-over by-products of The Tall Man’s human harvest, wearing familiar skins designed to fool or entice any luckless survivors who stumble across them.

When Reggie picks up “Jennifer” (the aforementioned Marnhout) and offers to drop her at “the next town” – the same line he has fed to hitchhikers in earlier instalments – he now swiftly corrects himself, specifying “the next INHABITED town”.

But, finding one of *those* any time soon frankly seems an unlikely prospect, given that the pair are forced to spend the night in a derelict motel cabin most recently occupied by some (presumably deceased) vagrants – itself a quantifiable step-down from the shifty and paranoid fleabag motel owner Reggie dealt with in part III, and the perfectly functional motel he and Mike stayed at in part II.

All this serves to create the impression, when Mike and Reggie are eventually reunited for whatever passes for a ‘final confrontation’ with The Tall Man, that they are absolutely alone – facing their enemy on the surface of what might as well be an alien world. Indeed, it is looking increasingly like the ‘red planet’ on which his columns of dwarfs toil, as glimpsed through the dimensional portals that pop up throughout the series, perhaps giving us a glimpse of the eventual outcome The Tall Man has in mind for “our” world.

But – we’re getting ahead of ourselves. With this apocalyptic side-bar now thoroughly covered, it’s time to shift our attention back to the main event. So, be sure to tune in in a few days for my run-down of Phantasm parts four and – cue nervous, uncomfortable silence – five.
Posted by Ben at 20:30