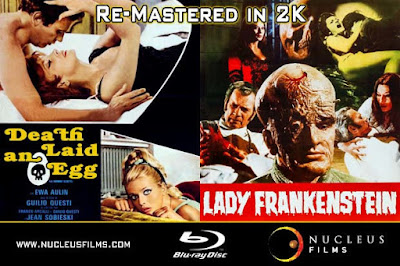 Well, for the moment at least, life goes on, and another blogging responsibility that slipped through the cracks during this Halloween season and its ugly aftermath is the necessity of my telling you about Nucleus Films’ Euro-Cult Restoration Project, a recently launched crowd-funding initiative whose initial goals (it would be nice to think there will be more to follow, should things go well?) involve bringing lovingly restored and reconstructed versions of Lady Frankenstein (Mel Welles, 1971) and Death Laid An Egg (Giulio Questi, 1968) to the people.

To be honest, I recall finding ‘Lady Frankenstein’ a bit so-so when I watched it via a bootleg a while back, but I’m still looking forward to the opportunity of reassessing its virtues via the medium of a shiny new blu-ray. The real prize here from my POV however is ‘Death Laid An Egg’, a surrealist (in the legit sense of the word) art-house giallo whose blackly comic tone (yes, it’s set on a chicken farm) and Godardian formal transgressions ensure that it does just as much of an unforgettable hit & run job on its nascent genre as Questi’s legendary ‘Django Kill’ did on the Spaghetti Western.

At the time of writing, Nucleus’s campaign has not quite reached the amount needed to guarantee ‘..Egg’s restoration, so… I know the world at large has one or two other bigger fish to fry right now, but could you at the very least consider doing your duty for the preservation of bold & weird cinema and pledge some cash before the closing date crashes down at the end of the month? Nucleus are good guys with an admirable track record of movie-related shenanigans, and I am confident that they will do right by both these films and their customers, so come on – what have we to lose but our dignity?

All the further info you could wish for can be found in the link above.
Posted by Ben at 17:00