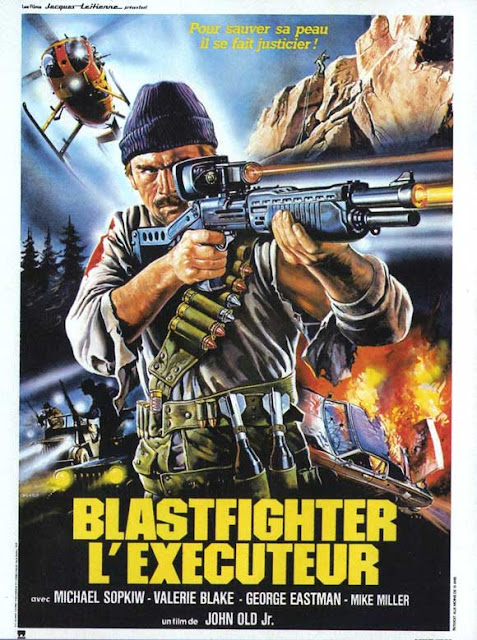 At some point in this review thread, we had to turn our gaze toward that prodigal son of the Italian exploitation business, Lamberto Bava, and what better place to start than here, as a Commandoed up moustache warrior stares us down through the barrel of a magnificently rendered shooter in what must surely count as one of the most definitive action movie posters of the 1980s (maestro Enzo Sciotti in full effect, of course).

On the basis of its title and poster artwork alone, I had always assumed that ‘Blastfighter’ must be one of those Filipino-shot gonzo war movies that so wantonly proliferated through the final decade of the cold war – you know, exploding huts, chopper stunts, bloody dog-tags, the whole nine yards. So strong in fact was my belief that ‘Blastfighter’ was one of those movies that I somehow managed to read some stuff about it on the internet, buy a copy of it (from a SHOP no less), and put the disc in my player on one of those increasingly rare post-midnight moments when I still have the energy to consider plugging in the headphones and tackling a movie before bed…. all before realising that it is in fact a different kind of movie altogether. Such is the power of Sciotti’s airbrush.

Once I discovered that what “John M. Old Jr” actually had in mind back in ’84 was a comparatively restrained backwoods Americana survival thriller, I felt a tad uneasy, but I ploughed on regardless, and ultimately I’m glad that I did. Maybe it was the woozy early hours time-slot, the accompanying glass of whisky or the complete lack of any particular expectations, but, for reasons I can neither explain nor fully justify, myself and ‘Blastfighter’ had a pretty good time together on that lonesome Saturday night.

Dardano Sacchetti’s script comprises a neatly polished Frankenstein’s monster of parts repurposed from ‘First Blood’, ‘Deliverance’ and ‘Death Wish’, and as such ‘Blastfighter’ begins as disgraced hero-cop Jake ‘Tiger’ Sharp walks out of prison, having served an eight year stretch for blowing away the politically connected scumbag who killed his wife.* (‘Tiger’ is played by Michael Sopkiw, whom you may recall from Sergio Martino’s ‘2019: After The Fall of New York’ (1983), here efficiently embodying a 2nd gen photocopy of ‘70s Franco Nero.)

As inevitably happens in such situations, ‘Tiger’ is reluctantly picked up by a limo containing his former boss in whatever elite, special operations-type police unit he belonged to, who tries to convince him to come back on-board, offering him a prototype of an experimental new super-shotgun that fires every form of projectile under the sun as a token of goodwill. (Whoever this big-wig answers to, he apparently anticipates no “COP GIVES FREE GUN TO CONVICTED MURDERER” headlines looming in his future.)

Much to our disappointment as well as the boss-man’s however, ‘Tiger’ shakes his head and declines the offer of returning to an exciting career of legally-shaky, villain-blasting mayhem, opting instead to make a lonesome new life for himself ruing his past mistakes, nursing his broken heart and espousing the cause of peace and human dignity from the comforts of his cabin in the mountains of rural Georgia. He takes the super-gun with him nonetheless though and stashes it under the floorboards on his porch, because hey – this is America, so who knows when a steadfast, law-abiding citizen will need the help of a laser-guided, pump-action grenade launcher to uphold what is good and right.

To no one’s surprise, the build-up to that day begins almost immediately, as Tiger encounters a posse of perpetually whoopin’ and hollerin’ young rednecks who are in the process of decimating the local deer population, cruelly keeping their wounded prey alive as they sling them in the back of a truck to take home. Naturally, our hero must step up to confront such barbarity, and, as you might expect given his past history, he is far from diplomatic in his approach.

As it transpires, the rednecks are making a living selling the live animals to a Chinese butcher who is hacking them up for medicinal ingredients (the racist language thrown in this guy’s direction by both sides in the film’s drama goes unchallenged, incidentally), and matters are further complicated by the fact the leader of the posse is the younger brother of Tiger’s former hunting buddy and small town rival George Eastman – now a local logging company foreman who grants tacit paternal approval to their unsavoury shenanigans on a “well it give the boys something to do” type basis.

As the antagonism between Tiger and the good ol’ boys swiftly intensifies, the stakes are raised further when his teenaged daughter (Valentina Forte) tracks him down and turns up demanding some fatherly affection. (He had previously abandoned her to an orphanage after her mother was murdered on the self-fulfilling basis that “I was a lousy cop and I’d make a lousy father too” – our hero, ladies & gentlemen.)

Inevitably, the lecherous overtures the rednecks cast in Valentina’s direction add a slight pinch of ‘Straw Dogs’ to the brew, and of course we know it’s only a matter of time before Tiger is going to be pulling up the floorboards to retrieve his mighty gat, his tache bristling with a renewed thirst for vengeance…

Driven on by the kind of inflexible moral certainty that only a truly cynical production can muster, ‘Blastfighter’ happily jettisons the relatively complex issues that weighed upon its aforementioned source texts, instead choosing present its story as an almost pre-modern popular morality tale, in which a character’s courage and martial prowess is entirely dependent upon the righteousness of their cause (as solely determined by the film’s scriptwriters), and in which real world consequences matter not a damn, so long as the cruel baddies are vanquished and the deer can gambol freely across the wooded hillsides as nature intended. (Except of course on rare occasions when some fine, upstanding sandy-haired hunter needs to shoot one of them for food, or to humanely manage the population or whatever, which is wholly acceptable – look, Tiger agrees, and you’re not going to argue with him, are you?)

Legend has it that this movie only exists at all because the budget Lamberto had lined up for a proposed post-nuke science fiction project fell through, and, having already pre-sold it to distributors under the name ‘Blastfighter’, he and his producers had to cobble something cheaper together to fill the gap. Under such  circumstances, I think everyone concerned did extremely well, but, inevitably, quality still comes on something of a sliding scale here, with ‘Blastfighter’s strongest moments (the action and outdoors stuff, chiefly) sitting right at the top end of what you’d expect of mid-‘80s Italian genre product, whilst the weakest sink to an almost Troll 2 level of face-slapping stupefaction.

The latter, it must be said, is almost entirely a result of the appalling English-as-second-language dialogue, and of the especially shoddy post-sync dubbing with which it is delivered. [English is the only language option on my DVD of the film, so I am unable to comment on how the Italian track fares in comparison.]

Regrettably, this serves to reduce many of ‘Blastfighter’s character interactions and tender “back story” conversations to a state of borderline nonsense, as actors’ on-set lip movements are inexpertly matched up with entirely inexplicable pronouncements (“there’s only one way to get pleasure in this life, but one hundred ways to get pain – don’t seem fair does it?”) that one suspects existed only as “LINE NEEDED HERE – ASK ENGLISH DIALOGUE GUY” gaps until long after principal photography was completed. Thus, we must persevere through dozens of instances of semi-meaningless, generic action movie blather whose zen-like opacity will boggle the mind of any viewers actually paying attention.

(That said, I did at least enjoy Sopkiw’s spirited “You want to know who I am? I’M A SON OF A BITCH… who wants to be left alone!” – a minor delight which more traditional line delivery would probably not have provided us with.)

That this state of affairs renders it impossible to connect with any of the film’s events on anything but the very bluntest level is hardly a surprise, but it is a particular shame in this case, given that the film-making here could under other circumstances have easily scaled the dizzy heights of actually-making-us-care.

Indeed, ‘Blastfighter’s technical acumen is actually far greater than its era and background might have led one to expect. Editing, cinematography and action choreography are all slick to a fault, whilst Sacchetti’s script (dialogue aside) is surprisingly coherent and well-paced (quite an achievement in itself from the man who gave us the dog’s dinner un-storytelling of Lucio Fulci’s early ‘80s horrors). In purely visual terms in fact, this could easily pass for a slightly rough-around-the-edges Hollywood studio film - making it all the more unfortunate that the game is up as soon as anyone opens their mouth.

Sadly, such unwarranted professionalism also elevates ‘Blastfighter’ to that particular grey area in which a film proves too well made and po-faced for viewers to simply laugh it off and enjoy it as a brainless thrill ride, whilst at the same time it is nowhere near “good” enough to generate any real emotional involvement or thematic engagement, meaning that, at the end of the day, what remains is just kind of… there.

Less the yummy cinematic junk food promised by its poster and personnel, ‘Blastfighter’ is instead more like a plate of tasteless steak and potatoes served at a quaint rural diner; despite occasional moments of uncouth wildness and genetically ingrained sleaze (could the brief flashback to Sopkiw’s wife’s death be leftover footage from one of Lamberto’s earlier gialli..?) and an absolutely bangin’ synth-rock theme from Fabio Frizzi, those who thrill to the madness and degeneracy of more typical Italian exploito product will be in for a letdown here.

If on the other hand though, you suddenly find yourself with a hankering for a reassuringly one dimensional tale of men with moustaches doing the right thing, attractively shot forest locations, badly dubbed teenage daughters, string-bending lead guitar stings and cars that explode in the slightest breeze – well, dive right into these cool Georgia waters my friend, and you won’t be disappointed.

Watchable, predictable, kind of likeable in a distant, undemanding fashion, ‘Blastfighter’ is, in a profound sense, a MOVIE. It also features a lovely country n’ western song written (though not performed) by The Bee-Gees, which plays three times in its entirety, so that's nice.

In closing, check out this interesting alternative promotional artwork (also by Sciotti), which I *bet* must have originated back when the film was still being envisioned as an SF-tinged ‘Mad Max’ rip-off: 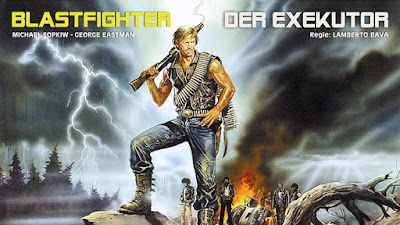 * Whilst watching ‘Blastfighter’, I was convinced that Schwarzenegger’s ‘Commando’ also must have been a key influence, but subsequent research informs me that that film actually came out a year later, in ’85. I must have just been picking up on the shared Rambo inheritance common to both projects, I suppose.