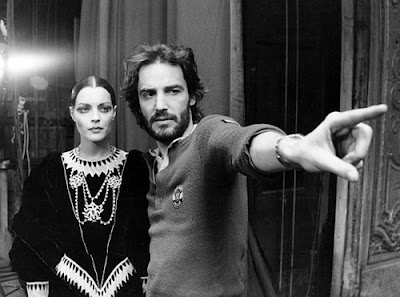 For those who haven’t heard elsewhere, I’m sorry to have to pass on the news that the death was announced yesterday of Andrzej Zulawski, a director who could I think be justifiably described as one of the more extreme filmmakers ever to walk the earth.

Not ‘extreme’ in the bastardised sense of simply filling his movies with sexual and violent content you understand, but in the more literal sense of the word - Zulawski spent practically every minute of screen time in his films attempting to challenge, provoke, enrage or disturb his audience, whether in intellectual, emotional or visceral terms, or usually some gnarled and twisted combination of all three - all whilst insisting that he was doing nothing more or less than portraying truth as he saw it.

Seemingly carrying the trauma and bitterness of his wartime childhood and his upbringing in communist Poland with him like a fog of hatred and betrayal, driving his work ever onward to more furious intensity, I have an impression of him being a man whose approach to life embodied the word “uncompromising” so thoroughly that I’m willing to bet 90% of obits that appear in the coming weeks will drop it in the first sentence.

Based on interviews and commentary tracks I have listened to, he certainly came across as charismatic, frighteningly intelligent and somewhat intimidating - definitely not a guy you’d want to mess with (which must presumably have helped when it came to making such ambitious and defiantly uncommercial films within a compromised and impoverished marketplace).

Like most of his fans in the quote-unquote “cult film” milieu I’m guessing, the first Zulawski film I saw was ‘Possession’ (1981), which screened one year as part of Leicester’s much-missed Fantastic Film Festival. As a local student with a cut price season ticket in hand, I popped along one evening without any preconceived idea of what to expect, and to say the film “blew me away” would be an understatement. In fact I was so overwhelmed by it, I remember spending several hours wandering around the streets in a daze, trying to make sense of what I had just seen, eventually returning home after I was almost hit by a bus.

If we take the term literally, I still consider ‘Possession’ to be one of the best “horror films” ever made, but of course, with Zulawski being the kind of guy who never gave two shits for anybody’s idea of ‘genre’, it is so much more besides that. An unflinching record of the emotional apocalypse triggered by the collapse or a marriage, a razor’s edge fugue for the schizophrenia of Europe’s East/West separation in the drag end of the Cold War, a terrifying science fiction/conspiracy story – interpret it how you will, what's certain is that it is a unique and magnificent film, a troubled and troubling masterpiece somehow wrenched out of production circumstances that would have tried the patience of a saint, and I recommend it to everyone (assuming you’ve got the movie-watching guts to roll with the punches, so to speak).

It was only some years after that, after finally obtaining a DVD copy of ‘Possession’, that it occurred to me that this guy had probably made some other films, and that I should probably look into getting hold of them. His debut feature, ‘The Third Part of The Night’ (1971), happily available on legit UK DVD, likewise proved incredible – a surreal and disturbing take on the “coming to terms with WWII” formula that just about every ‘serious’ mid-century European filmmaker took a stab at at some point, immediately differentiated from its art-house contemporaries by a wealth of startlingly imaginative imagery and stylised technique that swings closer to Argento than it does to Wajda, allowing the film’s more shocking sequences to hit like hammer-blows, even whilst it’s obtuse socio-cultural ruminations on the Polish experience may be somewhat lost on the casual viewer (the very idea of a “casual viewer” being Zulawski’s sworn enemy throughout his life, one suspects).

That latter issue began to prove problematic as I delved further into the Zulawski filmography, acquiring scarce and relatively pricey editions of both ‘L'Amour Braque’ (1985 – essentially untranslatable French title sometimes rendered as ‘Limpet Love’, or ‘Crazy Love’) and ‘Diabeł’ (‘The Devil’, 1971), both of which I’m afraid I found gruelling and mystifying viewing experiences that I would be happy to avoid ever returning to.

That is not to say they are bad or disappointing films – on the contrary, they are grand and daring pieces of cinema, rich in harrowing performances, beautiful photography and directorial vision. It’s just that that vision is so intensely personal, so dense in obscure cultural metaphor and intellectual rigour – accompanied by a complete refusal to yield any ground whatsoever to the demands of that aforementioned “casual viewer” – that watching them often felt like being lost without a map in some nightmarish wilderness of insane pandemonium. I remember them in much the same way one might remember being beaten by the police, or spending a night on the freezing street in winter – which is to say, I remember them very well indeed, a fact that speaks for itself given my usual hazy cinematic memory.

As you might expect, this put a bit of a damper on my Zulawski-related explorations, but, after recently watching ‘Possession’ a couple more times, he remains a fascinating artist and filmmaker for whom I have a huge amount of respect, and, having recently acquired copies of his unfinished science fiction epic ‘On The Silver Globe’ (1977/88) and the controversial ‘Szamanka’ (1996), I’ve been looking forward to finding time to get back on the wagon.

And, at the time of writing, that’s that in terms of my own take on Zulawski as a director, but, as ever with these things, I hope it is a ‘take’ that will expand and deepen as time goes on.

If there is one thing that unites all of the Zulawski films I have seen to date, it is a sense of continual apocalypse: a feeling of the world being in a constant state of destructive transformation, with individual humans tossed around like leaves in a hurricane, maddened and driven to desperate acts by forces and feelings they (let alone we) can barely comprehend.

One of the director’s central goals however seems to be to convince us that we can and do understand what his characters are going through very well. Whilst I, in my stupid petit bourgeois fashion, would tend to suggest that if you regularly find yourself feeling like a character in a Zulawski movie you should probably seek professional help, he apparently saw things very differently.

I was particularly struck by this when I read somewhere a few years back that Zulawski had withdrawn his support and participation from a planned retrospective of his films in New York, because he had taken offence with the poster and blurb for the season, which made prominent use of the word ‘hysteria’.

I can’t seem to dig up his actual statement on the subject right now (comments are open below if you’re able to point me in the right direction), but I recall that the gist of his argument was that he was fucking sick of people describing the behaviour of characters in his films as “hysterical”, that such a description betrayed a complete misunderstanding of his work, and that as far as he was concerned, he was simply portraying the day to day reality of most people’s emotional life, that other filmmakers were simply too cowardly to put on screen.

Yeah, thinking back over the films, I had to blink and re-read that a few times too.

Ultimate obituary cliché though it may be, it’s rarely felt more appropriate to close by saying: he did it his way. Whilst there was precious little peace to be found in his films, we hope he rests in it now.

Working largely in Poland and France, Zulawski’s films were naturally graced with some magnificent posters, a few of which are displayed below. 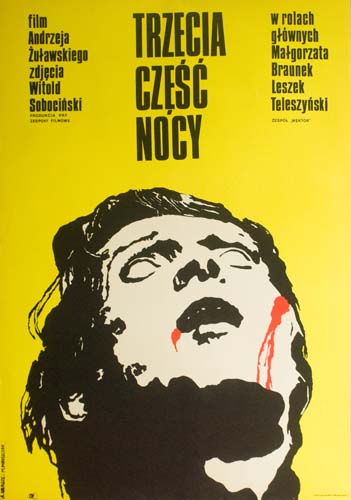 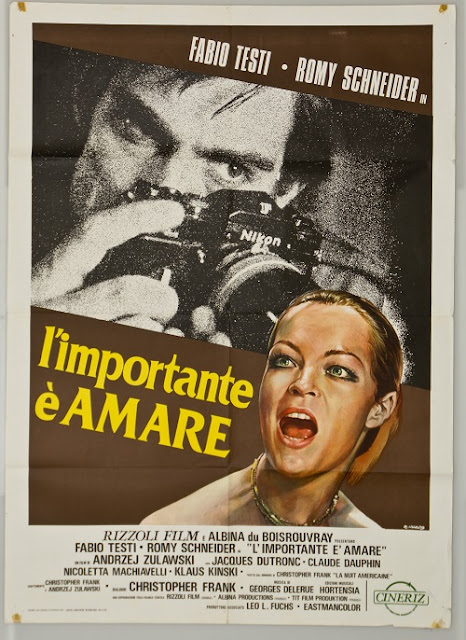 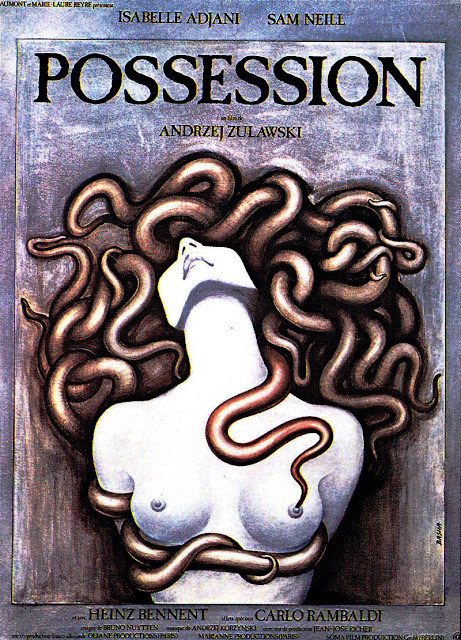 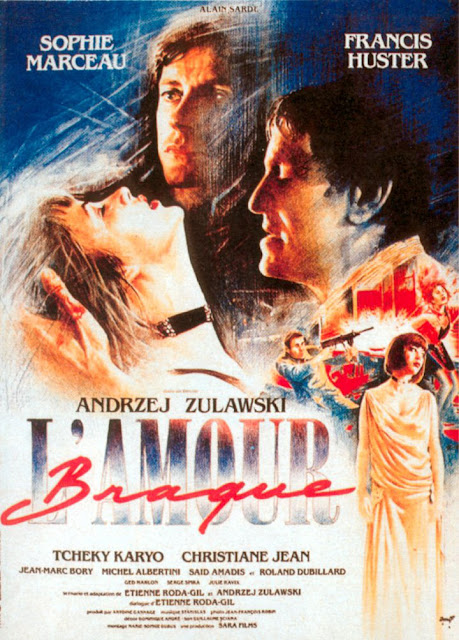 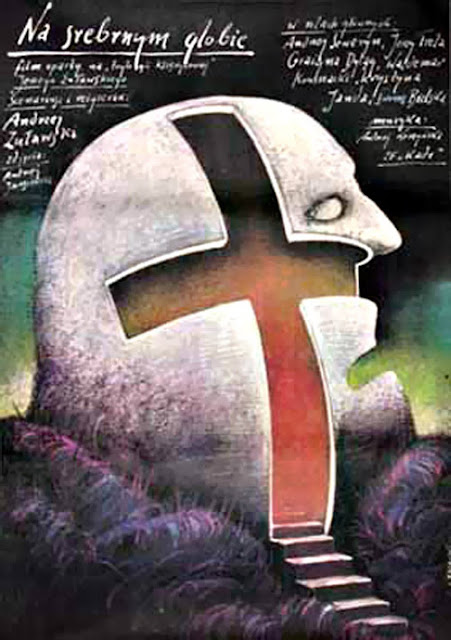 Excellent piece. This is a link to a very good lengthy interview

There is a video interview on Youtube but it's in Polish with French subtitles.