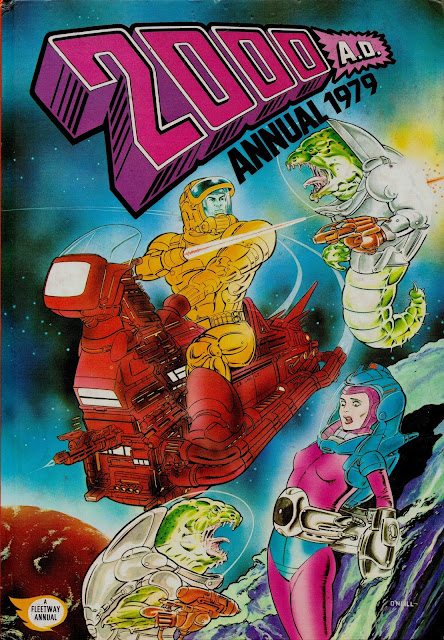 Striking about for some relevant content to keep this most un-festive of blogs ticking over through the festive period, I found myself scanning the shelves for good scanning material, and was reminded that, back in the lead up to childhood Christmasses long-gone, there was little I enjoyed so much as an f-ing good annual.

Whilst I’m confident that the concept of an ‘annual’ will be familiar to those raised in the UK, I’m not really sure of the extent to which the tradition of such publications crossed over to other territories. Maybe they did, maybe they didn’t. I don’t know. But I don’t recall ever seeing an American annual, or a French one, or a Russian one, so as such, I will risk patronising a large section of my readership with a brief definition:

An annual is a magazine-sized hardback book, published in the last quarter of each year, containing a compendium of material related to a popular weekly comic, magazine, TV show or entertainment franchise, aimed specifically either at distant relatives seeking an affordable Christmas present for a child, or else a pre-Christmas sop for parents seeking to keep said children busy through the holidays. Due to their sturdy construction and fleeting cultural relevance, these volumes will inevitably spend the remainder of humanity’s tenure on earth periodically popping up in charity shops and provoking fits of nostalgia in those aforementioned children’s grown up selves – which is great.

As with the vast majority of content on this blog, I am too young to have appreciated the 1979 2000AD annual when it first appeared, and so, strictly speaking, I can’t term the feeling that overcame me when I received it as a gift from my darling wife last year as one of ‘nostalgia’, but nonetheless, the feeling of joy I experienced whilst flicking through its pages, observing this pivotal stage in the British comics revolution that I caught the tail end of a few years later, was palpable.

Unlike the concept of annuals, I’m sure that, for the vast majority of potential readers of this blog, 2000AD needs no introduction. (If it does, here’s a wiki link.) 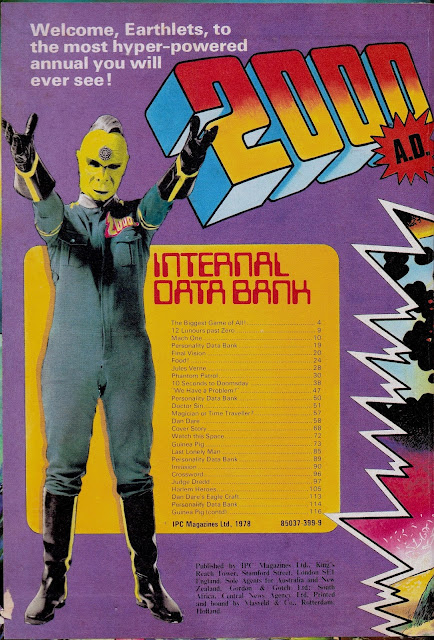 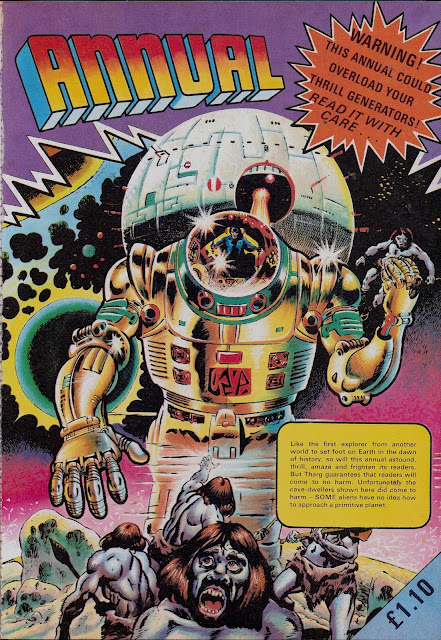 2000AD was still finding its feet at this point, with the material herein presumably developed around eighteen months after the comic was launched in February ’77, and this annual finds the title at a pretty fascinating stage in its development, slowly transitioning from the more traditional ‘boys own’ war/adventure stuff from which it emerged toward the heady brew of dystopian, punk-spirited satire and pop-art infused risk-taking that would come to define in it through its ‘golden era’ in the ‘80s and early ‘90s.

If much of this annual’s content admittedly seems pretty shoddy and anachronistic in view of what came later, it at least goes about its business in a gutsy, intermittently imaginative, and, it must be said, extraordinarily violent fashion that clearly points the way toward the title’s ‘imperial’ phase. With (I suspect) an impressive cross-section of British comics talent working behind the scenes, even the most juvenile and old fashioned strips here convey a sense of vision and craftsmanship that leave the vast majority of their domestic competitors in the field of blood-thirsty ‘70s comics in the shade, making it easy to see why 2000AD so quickly came to dominate this particular corner of the market.

At this stage, the comic’s writers and artists remained anonymous, and so in general I’m not going to go out on a limb trying to identify anyone as we go through the following scans. I have my suspicions here and there, and I’m sure that more dedicated Brit-comics aficionados than I will be able to pick out many of the contributors in seconds, but to avoid potential mistakes and embarrassment, I’m going to keep quiet on the subject. If you happen to be one of those aforementioned aficionados, further info is welcomed in the comments below.

Anyway, after somewhat alarming contents spread featuring what appears to be a live action Tharg the Mighty, the first number here is a one-off, ‘The Biggest Game of All’ which runs through a particularly thuggish variation on the old ‘time travellers return to prehistory, change stuff, inadvertently erase humanity’ yarn, all concisely wrapped up in five pages. 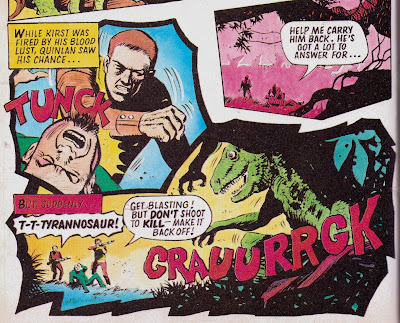 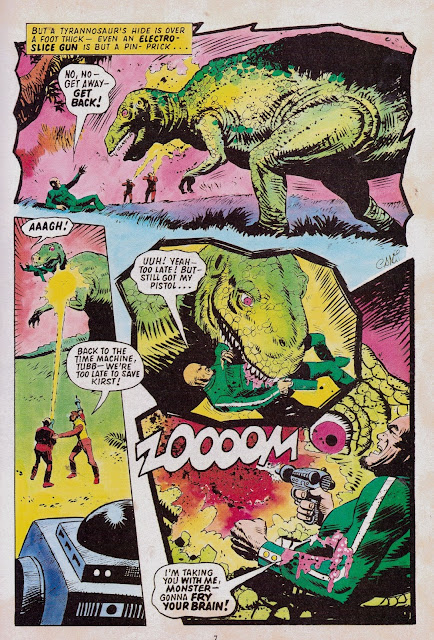 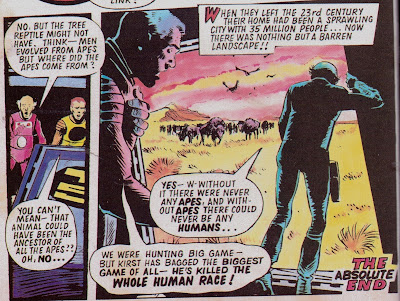 Next up, the M.A.C.H. #1 strip, as featured from prog # 1 onwards but dropped at some point shortly after this I believe, is a thinly veiled rip off of the Six Million Dollar Man, with the titular protagonist here putting paid to a dirty commie attempt to infiltrate the world of ice hockey! (He’s ‘Man Activated by Compu-puncture Hyperpower’ by the way, in case you were wondering). 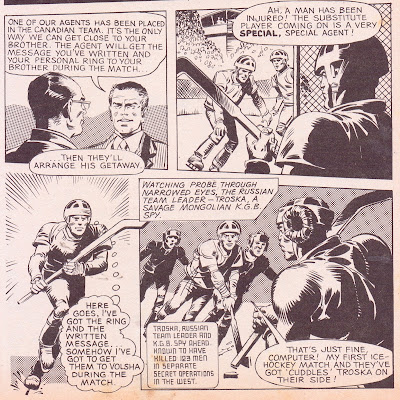 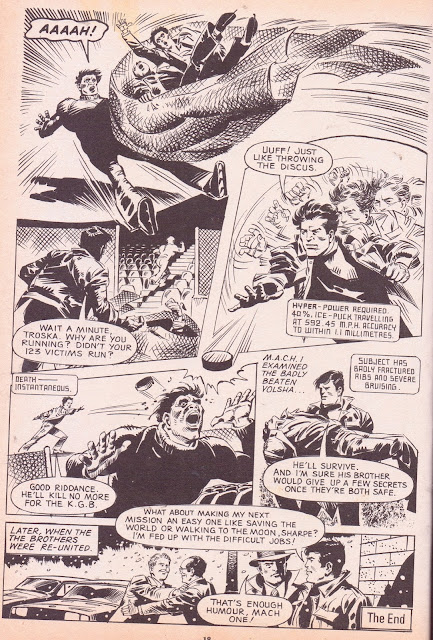 One of this annual’s best stand alone sci-fi shorts, ‘Food!’, is such a great example of quintessentially cynical 2000AD fun, I thought it best to scan it for you in its four page entirety. (Thanks to a signature sneaked in on the final frame, we can credit Brett Ewins for the artwork on this one.) 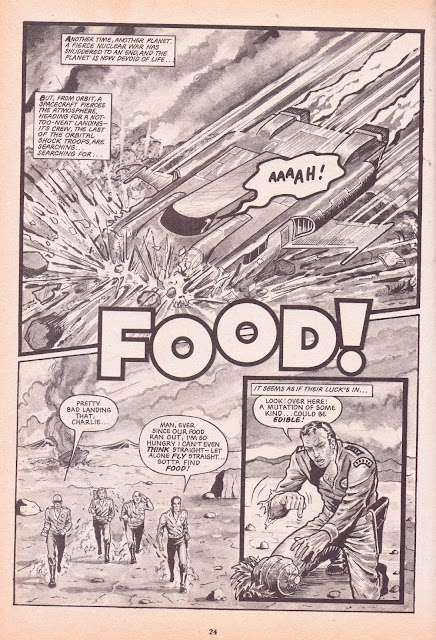 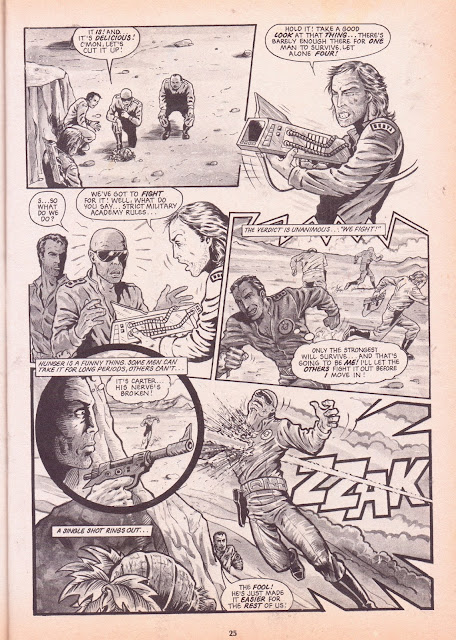 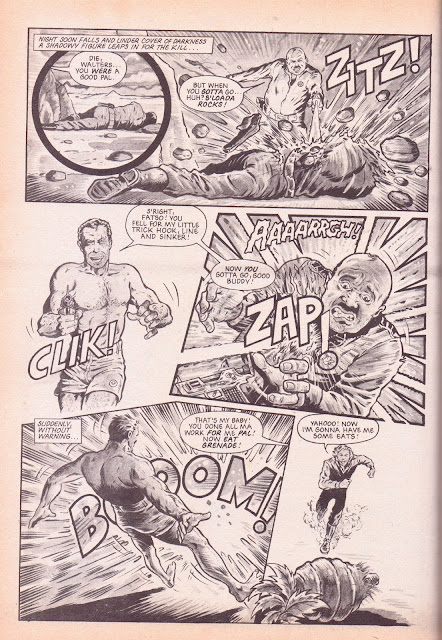 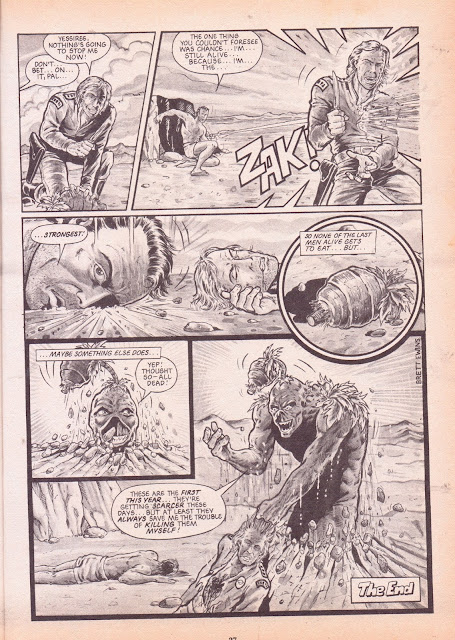 One of the more imaginative takes on standard action-adventure tropes in 2000AD’s ongoing series at this point came from war/time travel yarn ‘The Phantom Patrol’, as represented here via a weirdly compelling photo-realistic yet almost entirely background-less art style. Interestingly, the strip’s concept bears more than a passing resemblance to the wildly entertaining Sonny Chiba movie G.I. Samurai, which coincidentally was also released in 1979. 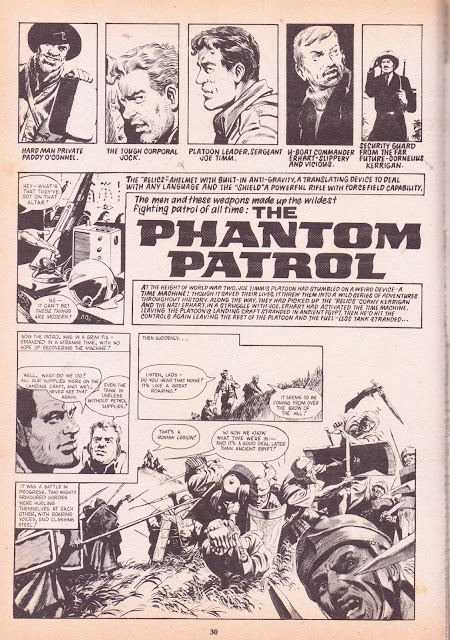 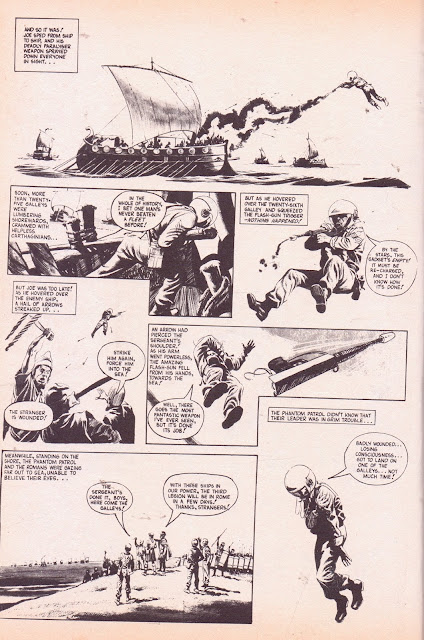 Believe it or not, we’re currently less than a third of the way through this annual (say what you like about Tharg’s editorial boasting, it’s hard to deny this thing is indeed a shoe-in for “the most hyper-powered annual [I’ve] ever seen”), so our trawl through the wonders within will hopefully continue in a few days, once I’ve had a chance to spend some more quality time sweating over the scanner.

In the meantime, we’ll finish with a couple of examples of the space-filling ‘factual’ features that inevitably serve to further bulk out any good annual.

In partiucular, I’d seek to draw your attention to the spectacularly sensationalist feature on the exploits of the Victorian clairvoyant Daniel Dunglas Home, in which a 2000AD staff writer’s attempts to tie historical events in with their own fictional universe are pretty audacious and actually very cool indeed if you ask me, in a sending-young-minds-off-on-an-inspiring-flight-of-fancy sort of way. 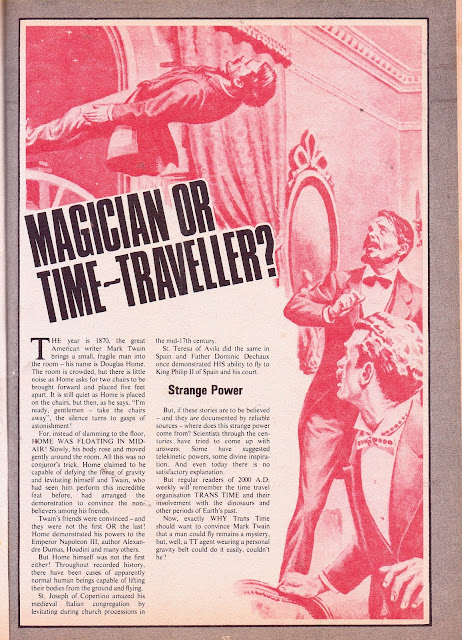 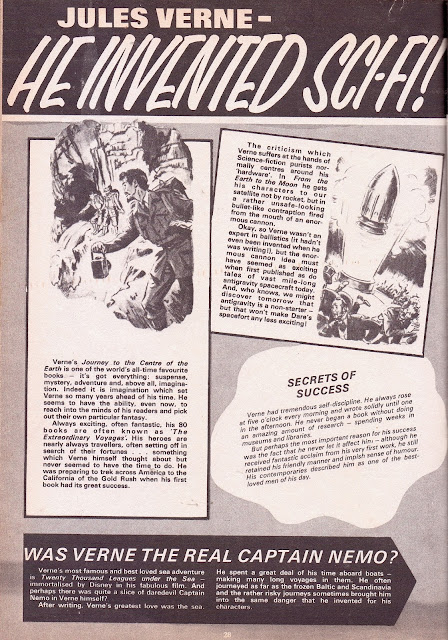 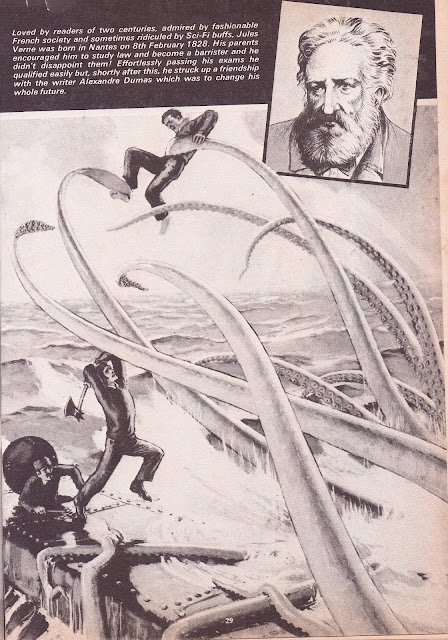 Got this when it came out in 1979 and still have it: 'food' lingered long in my mind when I was 8... what I always liked about 2000AD was, as a kid, you finished reading it and felt cleverer than you were before starting and that seemed remarkable in comics at the time...