Random Paperbacks:
The Inquisitor:
Last Rites For The Vulture
by Simon Quinn
(Dell, 1975) 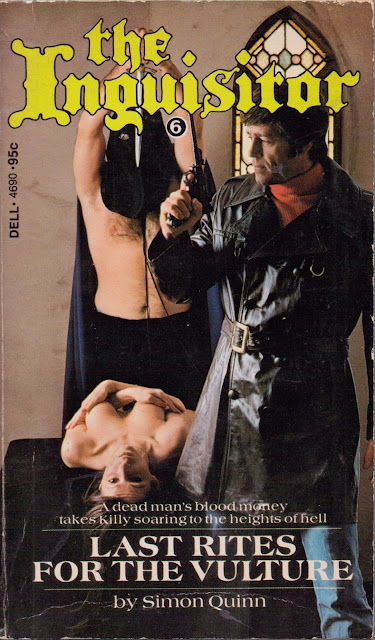 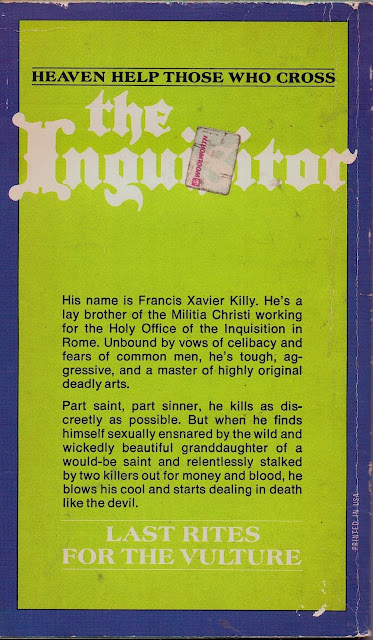 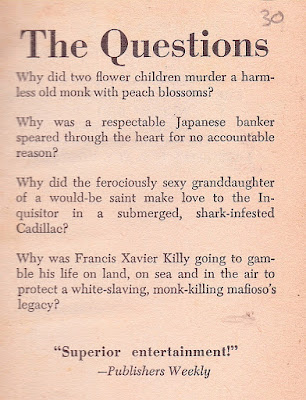 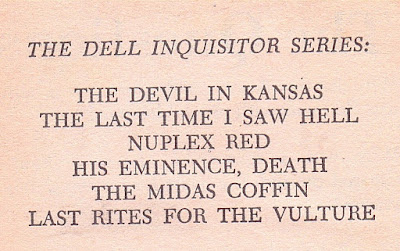 Until I randomly pulled this one off the shelf in a branch of Oxfam last weekend, I was entirely unfamiliar with Dell’s ‘Inquisitor’ series of books. Nonetheless, regular readers will appreciate that it took all of 0.5 seconds for me to decide that it was coming home with me, even if I had to fight someone for the privilege of ownership. (Thankfully I didn’t.)

Reading the back & interior cover blurb as I queued at the counter to pay made me all the more excited to get stuck into the extraordinary bit of gutter pulp lunacy I had apparently unearthed, but, I’m sad to report, a quick skim read on the bus home proved slightly underwhelming.

Despite the blatant horror / witch-smut come-ons of the cover and the papal evil-hunting nature of it’s protagonist, ‘Last Rites of the Vulture’ is a more or less generic globe-trotting, Bond-esque action adventure story, very much in line with other mid/late ‘70s ‘action’ series like the ‘Enforcer’ or ‘Destroyer’ books. There are plentiful exotic locales, daring crimes, gratuitous pop history info-dumps and cartoon tough guy antics... but very little hint of any supernatural/ or occult elements, insofar as I could tell. Oh well.

Then again though, it certainly has its moments. The following extract comes from chapter # 7:

“She sat up while he pushed on the door. It didn’t occur to him that they could simply dive off the trunk. As soon as he did manage to shove the door open, fifty pounds of water rushed in, and a dark form seized his pants. Killy pulled the door tight and pulled his leg back as far as he could.

‘It’s a shark, isn’t it?’ he asked Alexandra with disgust.

‘Yes.’ She squinted into the water. ‘The whole place is full of them, especially in the cannery when they dump the fish tails. They’ve probably been circling us ever since we landed.’

‘Jesus Christ, sex on the brain, and a shark on my leg.’

‘Look, get the bottle. We didn’t lose the bottle, did we?’

She fished the tequila bottle from the back, carefully making sure the cap was tight.

The thing on his leg began wrestling with his pants. Its head came out of the water, showing a saucer-shaped mouth full of teeth and eyes on long gray bars that extended from the head.

‘Hit him between the eyes. That shouldn’t be so hard,’ she giggled.

He pulled his leg up. He hit his ankle first, but his second swing scored where Alexandra had suggested. As soon as his leg was free, Killy grabbed her and rolled over the seat in to the back of the car.

‘I thought you were going to throw him out,’ she complained.

‘Oh well, the tide’ll go out in the morning. We’re stuck here until then.’

‘We’re not stuck, I saved the bottle.’

She sighed, smiled, and opened her arms for him.”

Shortly thereafter, Chapter # 9 begins with the sentence “He woke up still inside her.”.

There are no words.

A few seconds of googling reveals that ‘Simon Quinn’ was a pseudonym of American writer Martin Cruz Smith, who went on to slightly more legitimate acclaim after his novel ‘Gorky Park’ was published in 1981. Be warned: trying to square the inebriated, shark-punching mayhem outlined above with the photo on the author’s wikipedia page is quite a trip.