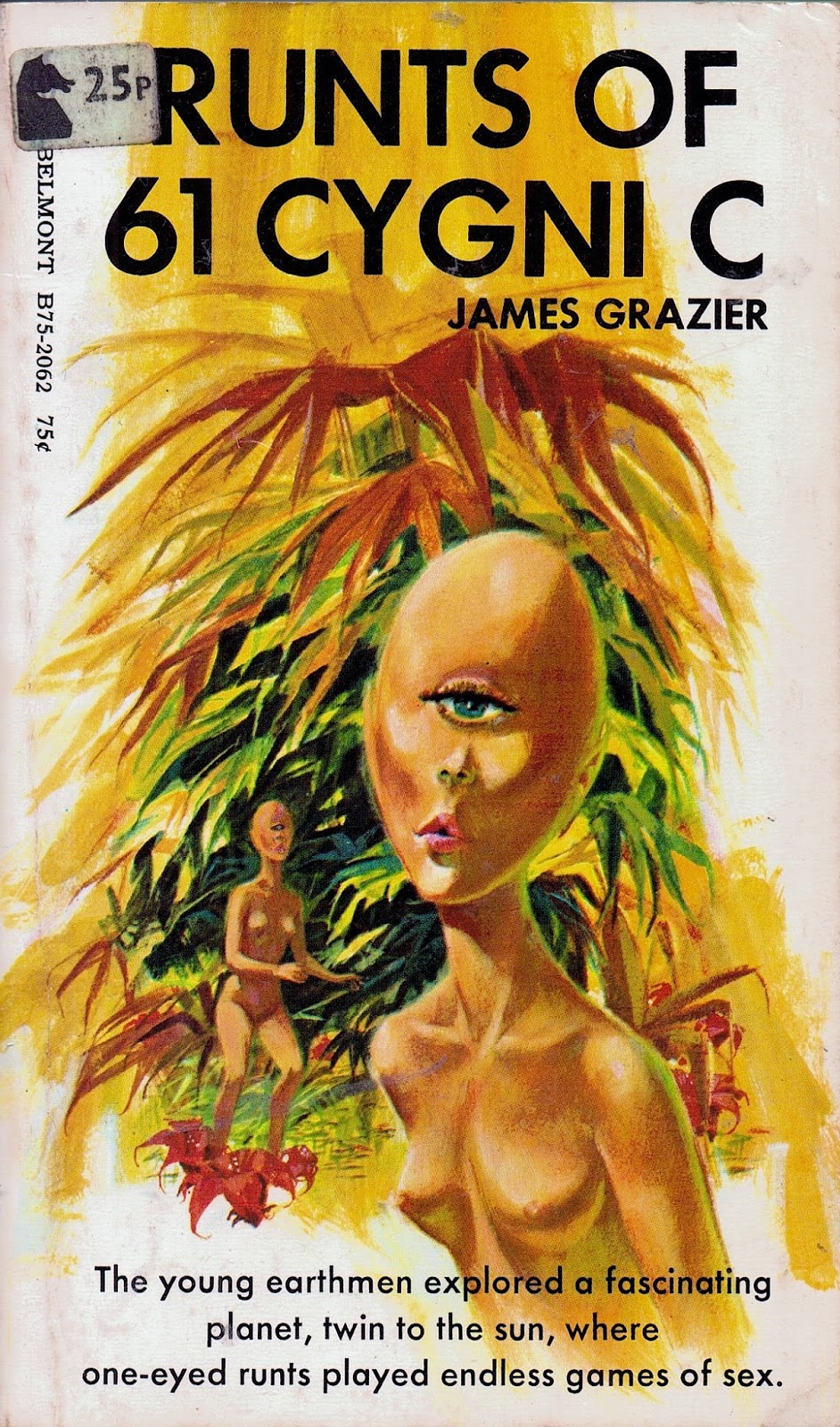 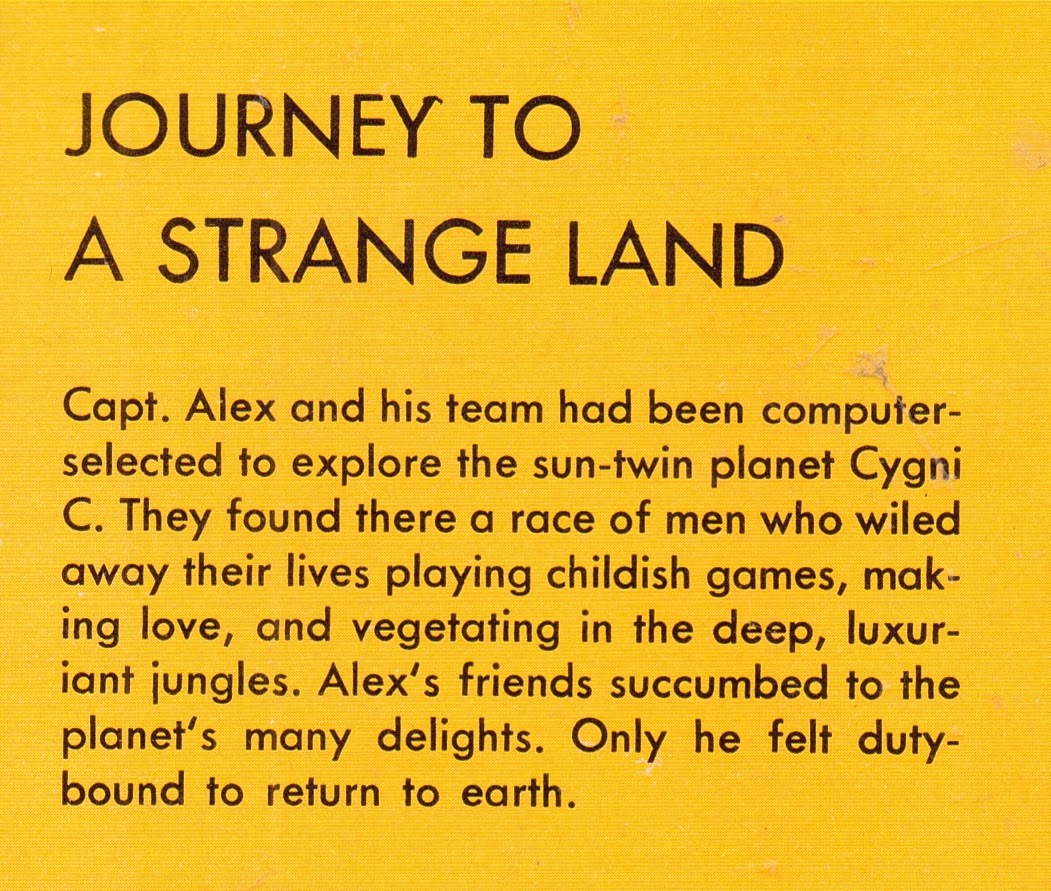 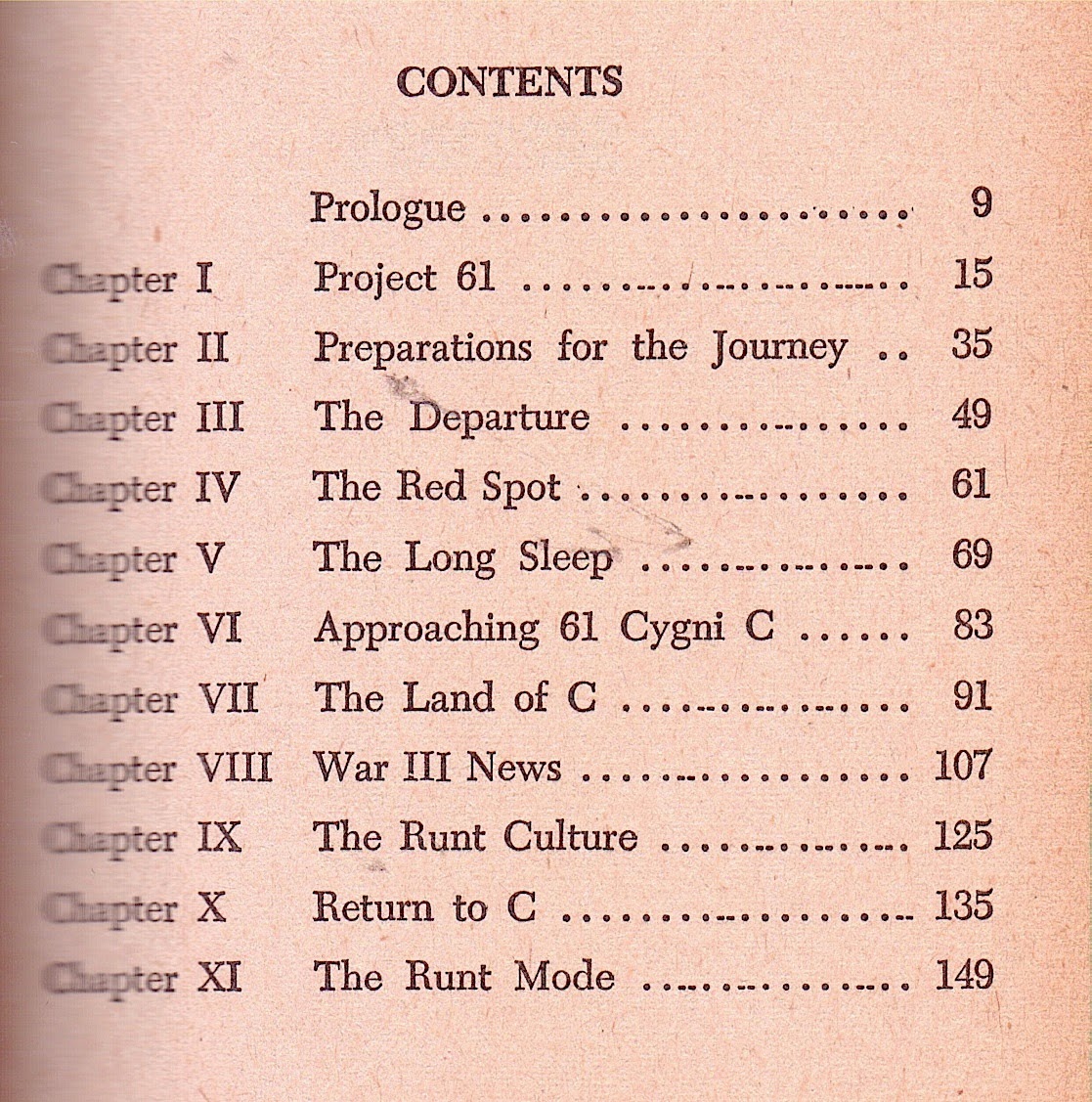 A somewhat legendary volume within SF/pulp fandom for, well… fairly obvious reasons, I remember laughing a great deal as a teenager when I first read the extraordinary cover blurb of James Grazier’s ‘Runts of 61 Cygni C’, as quoted in Kim Newman & Neil Gaiman’s Ghastly Beyond Belief.

Now that I actually own a copy (£2 from the basement of Booth’s Books in Hay on Wye) and have skim-read it, I’m happy to report that this cheapie from Belmont (frequent publishers of pretty weird, throwaway stuff, or so it would seem) is thankfully not the depraved runt-orgy that casual browsers may have feared.

Indeed, thoughts of pro-creation remain far from the author’s mind during the book’s thoroughly formulaic first half, during which a team of potential space travellers are laboriously selected by an infallible computer to crew a ground-breaking mission to investigate a distant planet with an atmosphere much like our own, and, more importantly, inhabitants much like our own:

“The two video-motion tapes of Planet C have shown earth-type men scurrying around a dark, sandy beach area. We clearly saw two legs and arms, no nose, and only one eye in a hairless head. We could not see ears nor hair on any part of the body – there was no evidence of clothing.”

Amid much talk of food-tubes, interstellar arcships and global under-population, two married couples are eventually selected for this task (presumably in an attempt to foster a harmonious atmosphere onboard ship or something), and, by and large, generic mid-century sci-fi reigns supreme.

If this book was indeed intended as some kind of edgy sci-fi sex comedy, then needless to say, it misfired badly (I mean, as if you couldn’t tell that from the cover alone). Indeed, the first inkling of anything remotely saucy going on doesn’t reach us until page 59, after the voyage to Planet C has finally departed;

“Alex put the tape measure’s zero mark flat on Diana’s chest, then he ran the measure out to the very tip of the extended nipple. His cheek touched the expanded breast wall, at the same time Diana sucked in her flat, hard stomach and her magnificent torso swelled, about to burst with desire. He measured eighteen centimeters exactly, about six and a half inches, with Diana in a half-sitting position, leaning back, panting, on the soft airpillows.
‘Now the other’, calmly remarked Alex, ‘this one is precisely eighteen centimetres, that one should be sixteen, two centimetres smaller according to that simple, silly, silver-fingered robot!’”

Anyway, skipping ahead a good number of pages - shortly after they reach their intended destination and begin observing the diminutive, one-eyed occupants of 61 Cygni C freely frolicking in their jungle paradise as planned, our intrepid astronauts receive some grim news from Earth. Apparently, nuclear war has broken out (the utopian scientific advancements of 2090 have had little effect on “the Red Chinese”, it would seem), and the human race seems likely to be well on the way to complete annihilation.

“Their faces were grave”, Grazier writes of our heroes’ reaction to these events, and, a few pages of incongruously cheery discussion later, three of the four space travellers find only one viable solution to the situation they find themselves in – namely, to give in and join the runts.

The remaining earthman, Alex, refuses to be party to such primitive debauchery, and as he continues to obverse the nature of the runt culture, the remainder of the look becomes a quasi-scientific rumination on the manner in which a parallel species to humanity might have evolved, had nature seen fit to deposit them in an environment furnished with an endless supply of nutrition, warmth and sunshine, with no natural predators or other sundry threats, thus allowing them to dedicate themselves entirely to pleasure, with no thought of self-preservation or technical / intellectual advancement. (Why they only have one eye is anyone’s guess, but I’m sure there’s an explanation for it thrown in here somewhere.)

It’s a fair bet that James Grazier was influenced to at least some extent here by Robert Heinlein’s ‘Stranger in a Strange Land’ (the writer of the back cover blurb certainly was), and indeed, far from the smirky tone you might have expected based on occasional, hideous ‘erotic’ passages such as the one quoted above, Grazier remains surprisingly straight-faced throughout, posing the question of whether the earthman or the runts represent the more ‘natural’ (read: admirable) state of being with what appears to be the utmost seriousness. This is, after all, his first venture in the ‘literature of ideas’, and his ideas must be clearly expressed!

Overall, there is something quite sweet about Grazier’s determination to plough on in earnest, in spite of the sheer goofiness of his scenario or the bizarro appearance lent to it by his publishers. As a result, ‘Runts of 61 Cygni C’ has a kind of perverse, Kilgore Trout-like nobility about it – a feeling that is only enhanced by the cack-handed horrors of Grazier’s singularly dreadful prose. Insofar as I can tell (and assuming “James Grazier” wasn’t a pseudonym), this was the author's sole published work.

Of course, this being a novel published in the aftermath of the sixties counter-culture, you can probably guess which course Captain Alex eventually ends up steering in this none too subtle moral conflict between atomic devastation and guiltless free love, and the section of the readership who were actually anticipating some red-hot runt action eventually find themselves rewarded on the book’s final pages, which for the sake of internet posterity are reproduced below.

Those already feeling a bit queasy are advised to look away now. 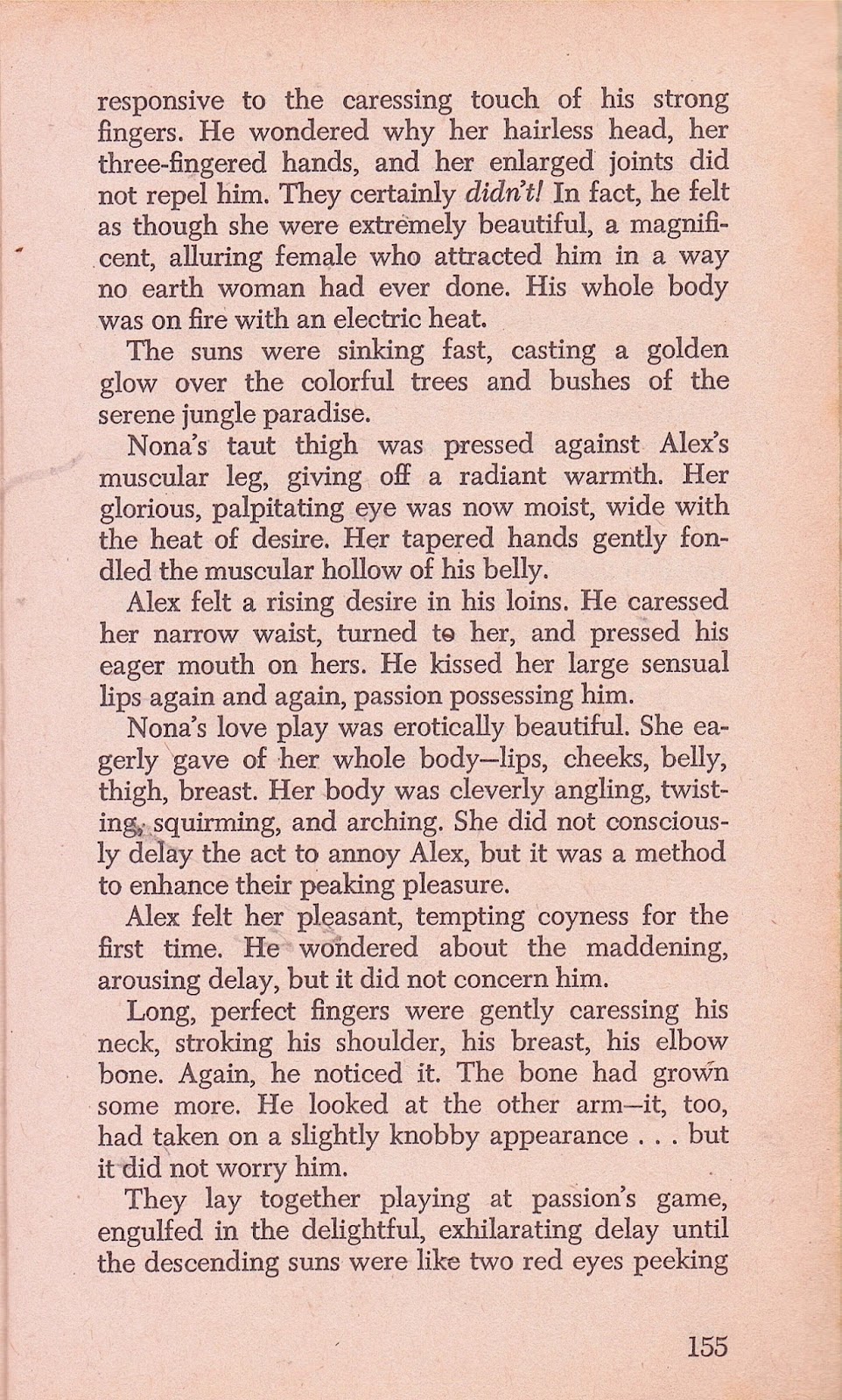 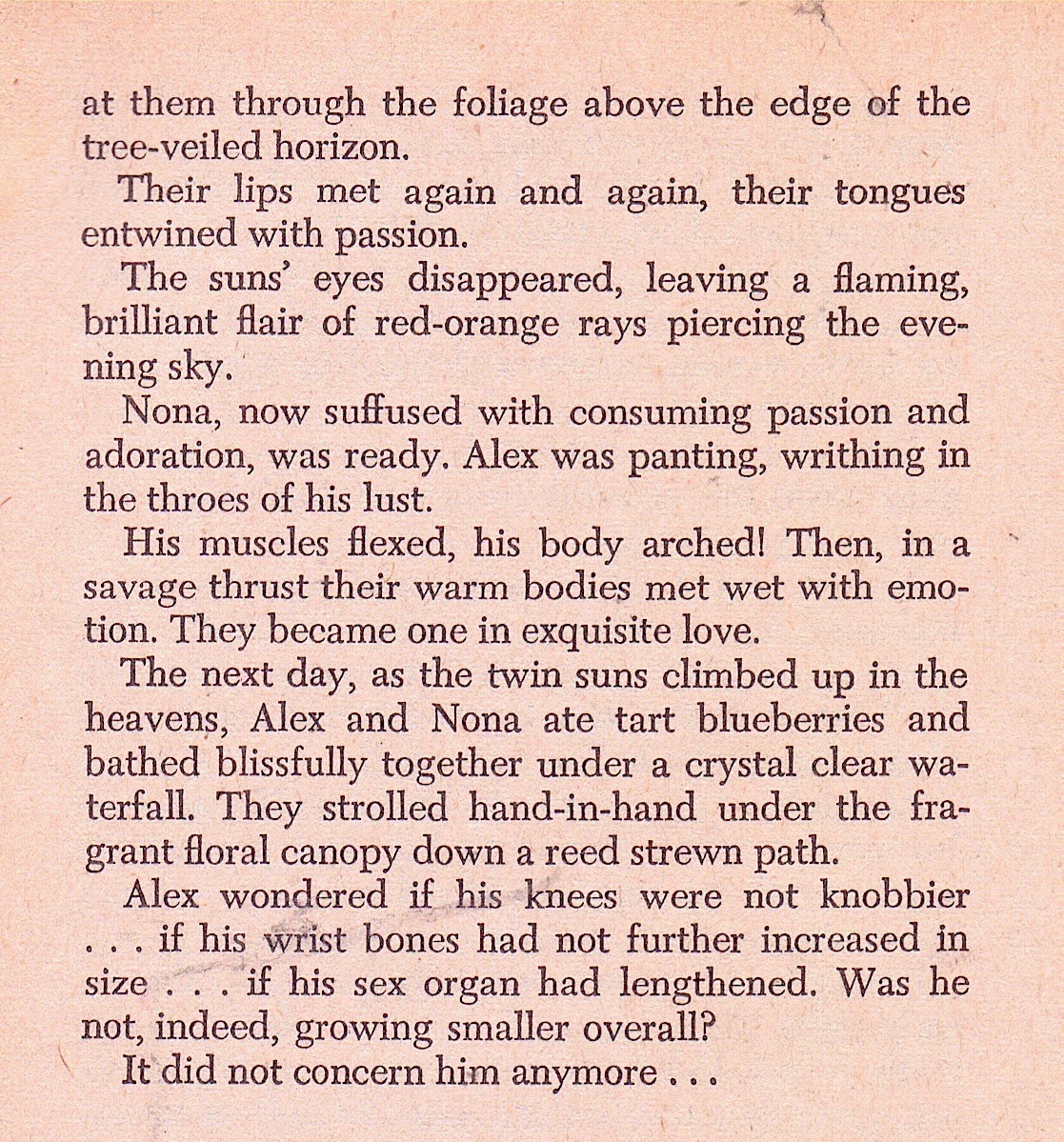 Selected highlights from the 1970 Belmont Books catalogue can be seen below. (Click to enlarge.) 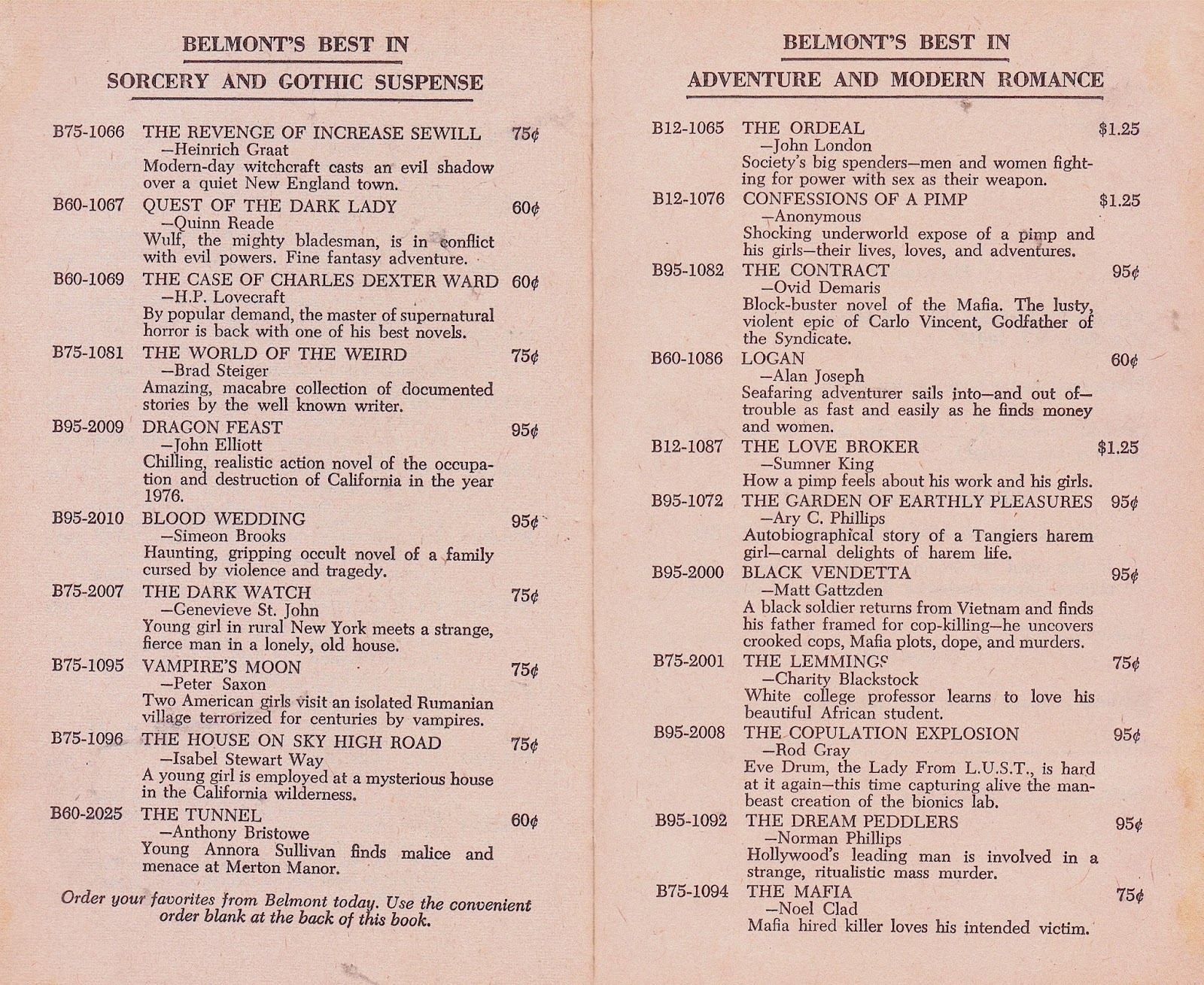