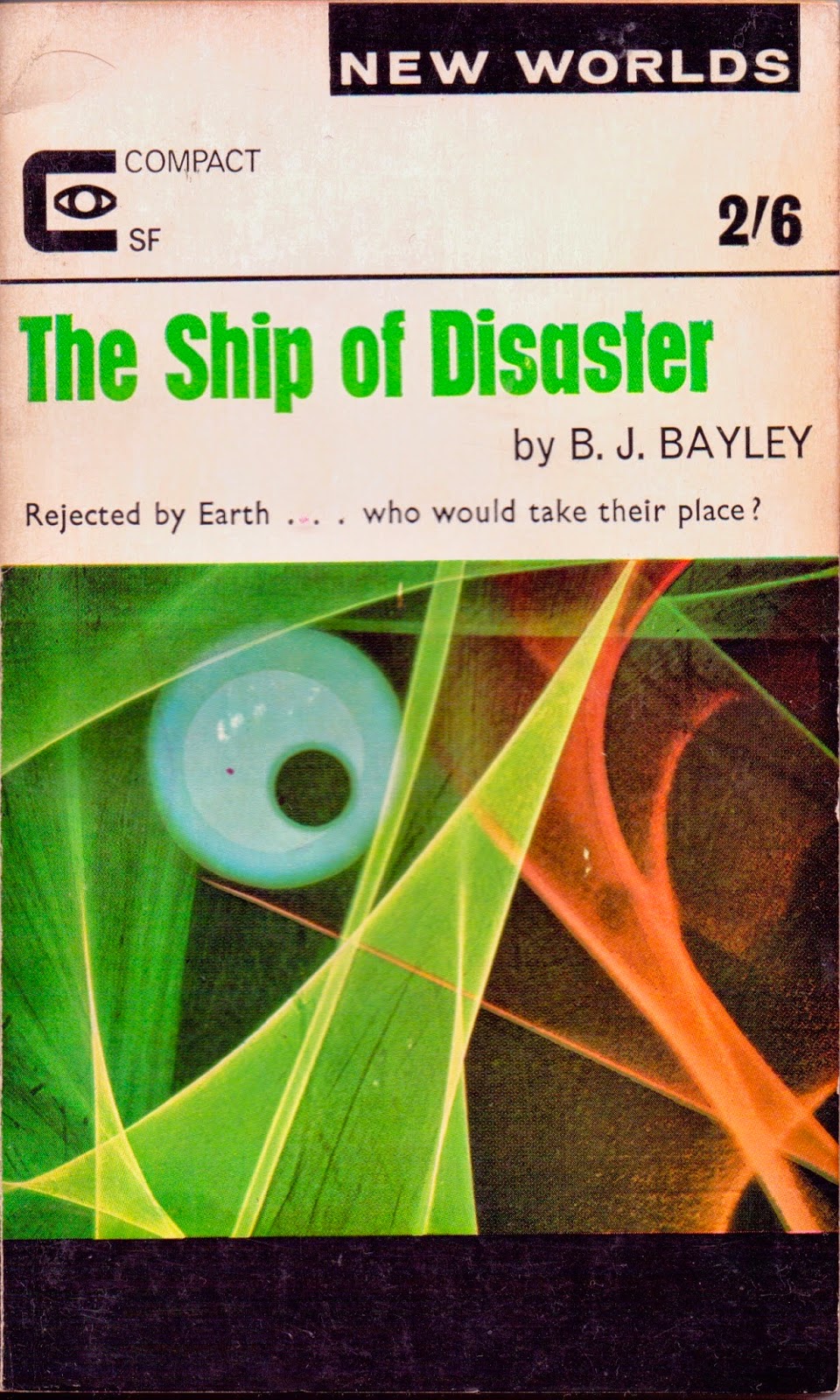 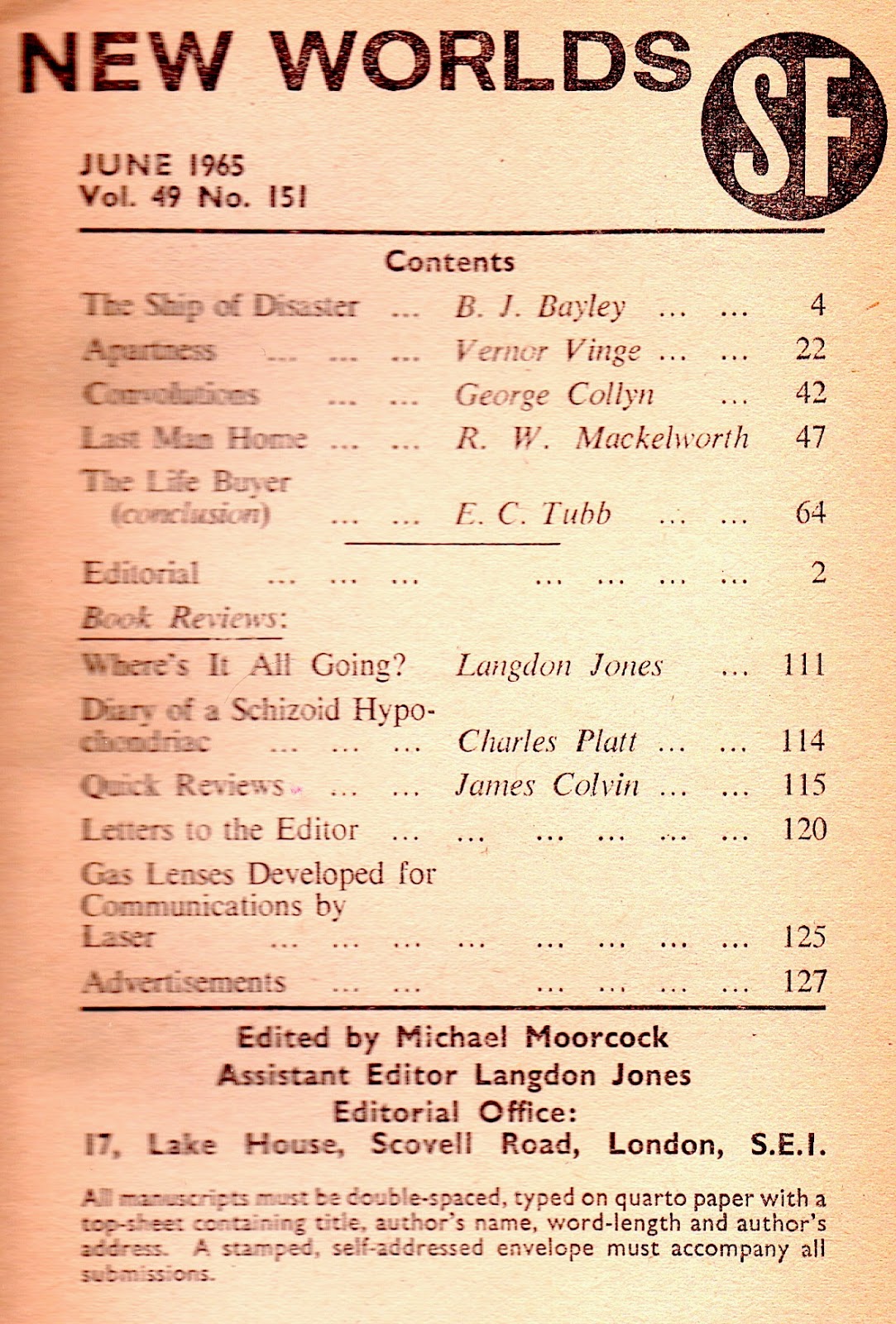 Skipping over the much-ballyhooed 150th issue extravaganza (which I don’t have a copy of), our next visit to Michael Moorcock’s New Worlds brings us to June 1965, with a new, slightly more trendy cover design in full effect, showcasing an agreeably abstract illustration that could be seen as prefiguring the impending onrush of psychedelia, at a push.

Not only is the illustration uncredited, as per usual for NW, but it is also entirely unrepresentative of Barrington Bayley’s cover story – a mildly fascinating little tale that makes for a brave choice to open an issue of New Worlds with. “This story may not at first seem to be SF of the usual kind,” the editors advise, “but read on, read on…”. And indeed, partisans of NW’s brand of ‘thinking man’s SF’ might well have been perturbed when the story opens with the haughty commander of an Elfen galleon navigating the misty oceans of some fantasy kingdom with a crew of Troll galley-slaves. Personally, I was so surprised when skimming over the opening pages that I immediately took the editors’ advice and sat down to read the damn thing. 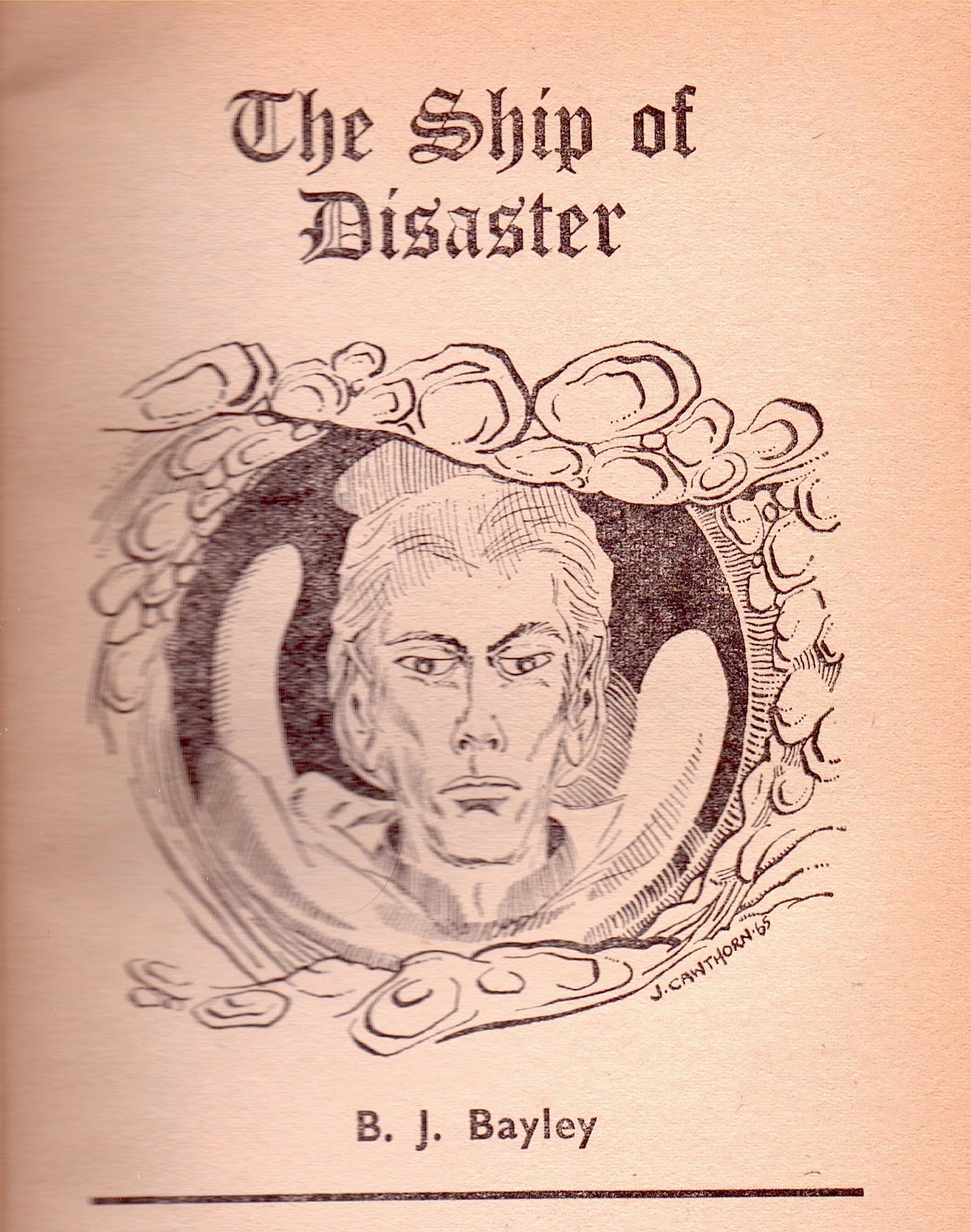 As the high fantasy type business rambles on, with the Elf Lord reflecting on the destruction of his race’s lands and the rebellion of their Troll slaves, and taunting his human captive with meals of soft and insubstantial Elf bread, I, like many contemporary readers presumably, found myself just waiting for the big reveal. Is Bayley gonna drop a few clues to hip us to this being Earth’s distant past, or far future? Or better yet, some kind of meta-textural type thing about a writer trapped in his own fiction, or a holo-deck style hallucination, maybe..? Which is it gonna be?

Those are indeed the general lines that the splendidly named Barrington B. is thinking along, but, very much in keeping with the rather nebulous style of new wave SF that New Worlds was already making its own by this point, his realisation of this wholly predictable genre-shift is neither as crude nor as linear as readers might have expected. I won’t give it all away here, but suffice to say, ‘The Ship of Disaster’ turns out to be an ambiguous and rather beautiful little story, a very well written piece that hints at a number of vast cosmic schemes without ever fully signing off on any of them, keeping its mysteries intact and instead letting us drift off into speculative reverie.

Perfect mid-‘60s New Worlds stuff in other words, although apparently not everyone at the time agreed. Whilst the lurch toward the experimental that would overtake the magazine in subsequent years is still in its early stages here, the letters pages in this issue still overflow with revolt. 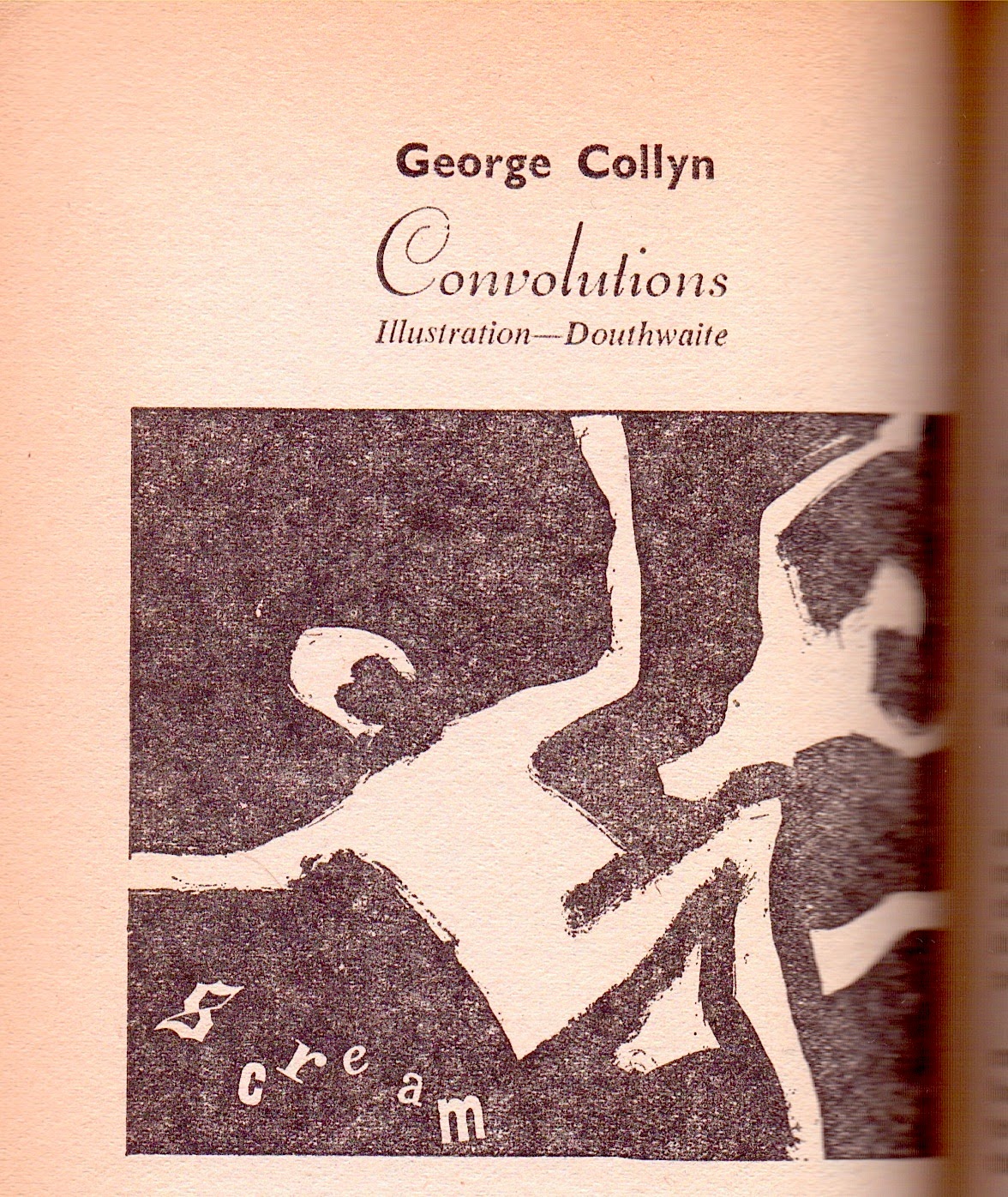 “Aren’t we getting a little off the point?,” thunders the I-swear-I’m-not-making-this-up-worthy T.B. Pulvertaft, B.A., BChir of City Hospital, Gladstone Road, Exeter:

“Since you have taken over NEW WORLDS an atmosphere of obsessive PENGUIN NEW WRITING has become apparent. The fact that a story vibrates with obscure meaning and ends in a crystalline, nebulous web of obscurity in a social extrapolation of present day society does not make it ‘Good Literature’, however hard it may appear to be trying to. Your job is to please the customers (and don't throw up your increased circulation at me) and to do this you must provide an alternate reality in your plot-forms. And more than a touch of the old cliché ‘sense of wonder’, which must not be confused with the ‘sense of utter bewilderment’ you have succeeded in conjuring in me in recent issues.”

Interestingly (or otherwise), a quick google reveals that T.B. Pulvertaft actually wrote extensively on the subject of cardiology, so presumably when he gave his stated address as a hospital he did so as a member of staff rather than a long-term inmate of some kind. Anyway, in regard to his views on science fiction at least, I suspect he might have found a soul-mate in the form of Mrs. Elizabeth French Briscoe of Brighton Road, Dublin;

“My blood chilled when I read this month’s directive (NWSF 148) from Commissar Moorcock, wherein he proclaims a bleak austerity regime bereft of space stories,”
[…]
“Mr Moorcock has said that he want to attract new readers. I suggest that the way to do so is to offer what SF alone can give: the space story. Tired, sophisticated old men with jaded palates (who have read all the SF in the world) may need to seek new titillations, but please remember the needs of simple but vivacious girls who have hitched their wagons to the stars.”

I don’t know whether we’ll be hearing more from Mrs. Briscoe in future, but I like the cut of her jib.

“So far as SF goes, he could easily be one of the finest writers yet he persists in retilling the same ground all over again. The Burning World – very well written and readable, yet it is little more than The Drowned World in reverse.”

An easy laugh, but also a good point from Mr. Gordon, I think. Even after all these years, his letter got me thinking about how Ballard – like that other NW fringe favourite William Burroughs – was mining a style so unusual and ahead of its time that he basically could spend much of his career endlessly reiterating the same themes, as sections of his audience continually struggled to get to grips with them.

Elsewhere in NW151’s editorial content, other controversies rage. For some reason, the writer Charles Platt pops up, contributing an unnecessarily vicious takedown of Brian Aldiss’s novel ‘Earthworks’, which he describes as “..a monotonous diary of a schizoid hypochondriac of dubious intelligence who is pushed around throughout the book, […] by Higher Powers, until finally discovering an Answer which was obvious to the reader two chapters previously.” Given the trenchant nature of this piece, one suspects a bit of a longer term Aldiss / Platt beef might be in progress, perhaps? (Go get him, Brian!) 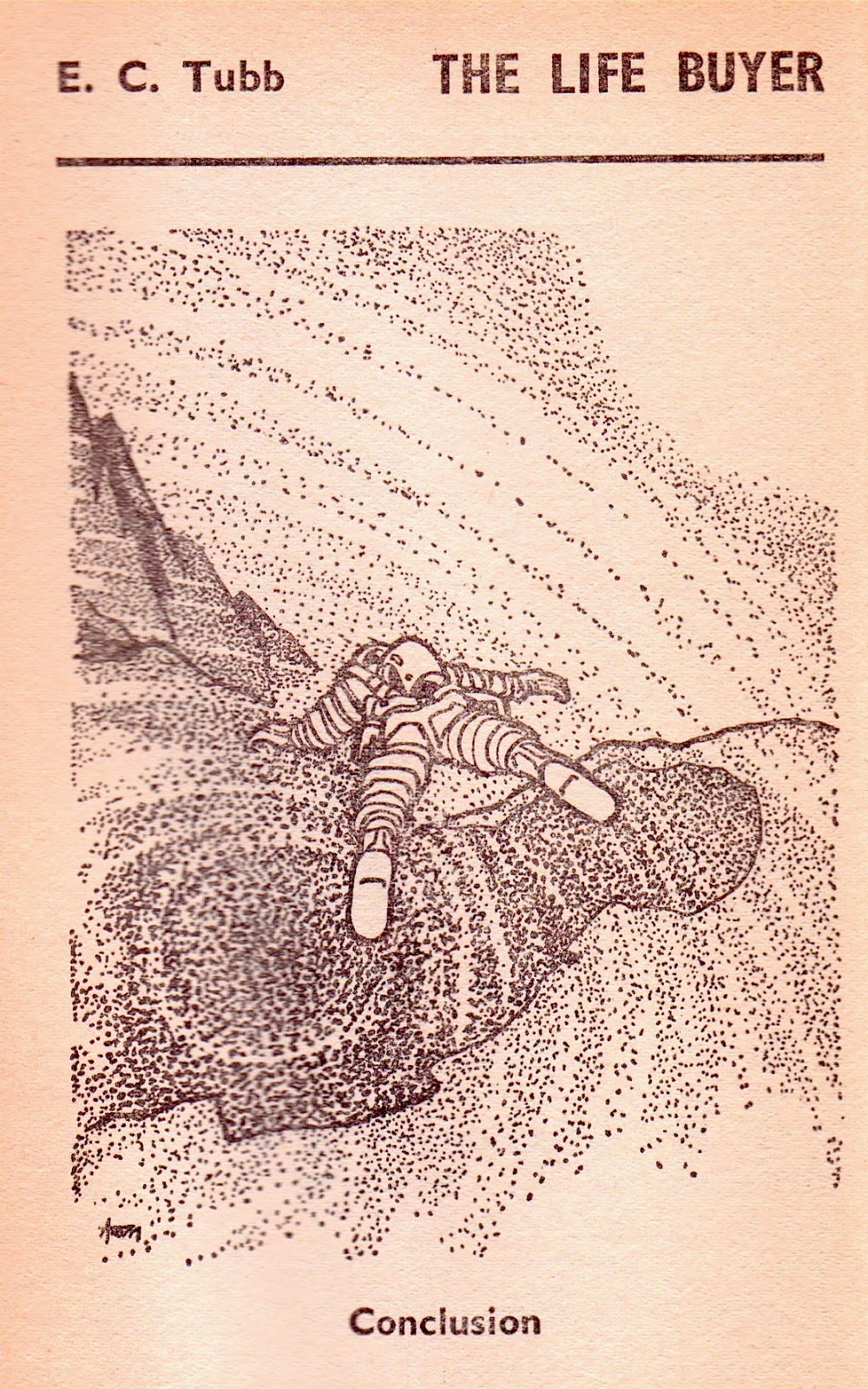 In a longer than usual reviews column, the elusive James Colvin gives a hearty thumbs up to the aforementioned ‘The Drowned World’, Asimov’s ‘The Martian Way’ and several anthologies, as well as discussing his mixed feelings about the work of Poul Anderson. Possibly the most interesting thing here is his claim that Anderson’s ‘The Broken Sword’ is “..possibly the only ‘sword & sorcery’ novel I shall ever enjoy”. A pretty surprising admission from the future author of thousands of pages-worth of Elric and Hawkmoon chronicles, but… oh yeah, we’re talking about the tastes of “James Colvin” here, aren’t we?

Another surprising claim comes from Langdon Jones, who, under the heading ‘WHERE’S IT ALL GOING’, glumly states his belief that “..no classic novel that is purely science fictional in nature has been written in the sixties”. What give, Langdon? Even leaving aside writers like Ballard, whom he rules out in his next sentence as “not SF in the strictest sense”, off the top of my head (and with a little help from wikipedia) I still count Philip K. Dick’s ‘The Man in the High Castle’ and ‘The Three Stigmata of Palmer Eldritch’, Walter M. Miller’s ‘A Canticle For Liebowitz’, Kurt Vonnegut’s ‘The Sirens of Titan’ and Robert Heinlein’s ‘Stranger in a Strange Land’ as having been published between 1960 and 1965, to name but a few. So I really don’t know where Jones is coming from here to be honest, although who knows, perhaps his claim seemed more reasonable at the time of writing, prior to the universal canonisation of the aforementioned works? Another slightly underrated classic of the ’60-’65 period that I’d go to bat for any day is John Brunner’s ‘Telepathist’, and Jones offers an equally positive appraisal of that one later in his column too, so I’ll let him off the hook for now.

So, those are the main points of interest I took from NW151. After all that palaver, there scarcely seems much point in going over Moorcock’s wishy-washy ‘how do we define SF?’ editorial, or noting the rather mystifying science column (headline: ‘GAS LENSES DEVELOPED FOR COMMUNICATION BY LASER’), but I’ll leave you with a few intriguing notices from the small ads, and a brief mention of my disappointment that the character limit in blogger’s ‘Labels’ box won't allow me to start a new tag for “simple but vivacious girls who have hitched their wagons to the stars”.