Sadly, it has come to my attention that a number of people whose work has enriched the world we like to trample around in here at Breakfast In The Ruins have passed away in the past month or so. As is so often the case, I feel that the attention given to some of these deaths online and in print media has been somewhat scant, even in view of these men and women's relative obscurity, and as such, I thought it seemed appropriate to take time out for a quick round-up of slightly belated obits, if only to spread the news to those who may not have heard it elsewhere. 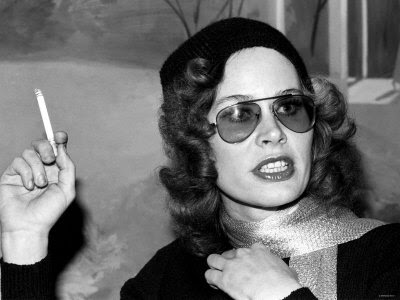 One of the most charismatic and capable American actresses of the ‘70s, and one of the busiest of the ‘80s and ‘90s, Karen Black is one of those names that always has veteran film-viewers exclaiming “hell yeah” when it appears on the lower reaches of some cast list or other.. and thankfully, it has found a place on many cast lists.

Mainly remembered for her early roles in such acclaimed/respected fare as ‘Easy Rider’, ‘Five Easy Pieces’ and ‘Day of the Locust’, or for her later “hit” with ‘Airport ‘75’, my favourite Black appearances are her turn as an aspirant country singer in Robert Altman’s ever-incredible ‘Nashville’, and her startling performance locking horns with Oliver Reed in Dan Curtis’s superior haunted house flick ‘Burnt Offerings’.

Beyond these highlights though, Black was clearly not a performer who saw her obvious talent as putting her ‘above’ the realm of pure entertainment. For this, we salute her, and her vast catalogue of appearances in genre / cult fare pretty much speaks for itself: ‘The Pyx’, ‘Capricorn One’, ‘The Squeeze’ (the Antonio Margheriti / Lee Van Cleef one, not the Brit Crime movie), ‘Killer Fish / Treasure of the Piranha’ (no, me neither, but it’s another late ‘70s Margheriti joint apparently), ‘The Last Horror Film’, ‘Cisco Pike’, ‘ The Outfit’, ‘Trilogy of Terror’, Hitchcock’s ‘Family Plot’, Deodato’s ‘Cut and Run’, ‘Savage Dawn’, ‘It’s Alive III’, ‘Out of the Dark’, ‘Evil Spirits’ (1990), three of Scott Shaw’s indescribable Rollerblade Seven un-films (the idea that someone who is actually a proper actor agreed to appear in those things boggles the mind), ‘Dinosaur Valley Girls’ (no idea, but give an empty couple of hours and I’d probably watch it), and more crazy/awful looking ‘90s/’00s STV flicks than can possibly be healthy, cruising into the 21st century with a couple of highlights like ‘House of 1,000 Corpses’, Alex Cox’s ‘Repo Chick’ and the recent ‘Some Guy Who Kills People’. Phew.

One of those people whose presence alone raises the quality bar of pretty much everything she appeared in, I think it’s safe to say Karen Black will be missed by just about everyone who watches these kinda films. 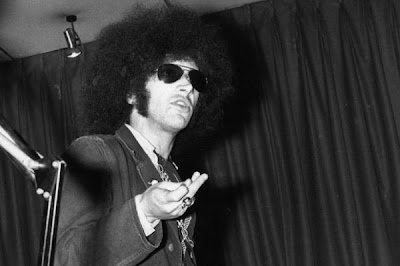 Mick Farren, who died at the Borderline in London on July 27th shortly after coming off stage with a reunited line-up of his band The Deviants, was very much a jack-of-all-trades of 20th century counter-culture, and a key figure in the ‘60s UK underground in particular, in his multitudinous capacity as a musician, poet, political organiser, all-purpose rabble-rouser, journalist, editor, bouncer, concert promoter, polemicist, novelist and life-long advocate of the gospel of sex, drugs, rock n’ roll and proletarian revolution.

Though the circles in which he moved make Farren more deserving of an obit on my increasingly moribund music blog (a proper appreciation coming soon, honest), his work very much strayed into BITR territory too. An unashamed fan of pulp fiction in all its forms as well as an early adopter of the works of William Burroughs, Farren’s lyrics and rants overflow with reference to sci-fi, comic books and detective fiction, and in the early ‘70s he followed the lead of fellow Ladbroke Grove scenester Michael Moorcock, becoming a full-time(ish) SF scribe, with a catalogue of paperback epics that includes the heavily allegorical ‘Texts of Festival’ (1973), the proto-cyberpunk DNA Cowboys quartet (1976 – 89) and the doorstop-worthy ‘The Song of Phaid the Gambler’ (1981). Good reads all, Farren’s novels, as you might reasonably expect, tend to have a Moorcock-meets-Robert Anton Wilson kinda vibe to them, but more down to earth than that might imply, never losing the pulpy heart of Dan Dare or E.E. ‘Doc’ Smith.

As an outgrowth of his involvement in the International Times and other underground press ventures, Farren also edited and published the seminal underground comix title ‘Nasty Tales’, successfully defending it against obscenity charges in the UK courts, in a ‘freedom of speech’ type victory that makes an interesting parallel to the more highly publicised ‘Oz’ trial. (And if anyone’s interested, his memoir ‘Give the Anarchist a Cigarette’, though inevitably a little self-serving in places, is probably the best book I’ve ever read about London counter-culture in the ‘60s and ‘70s.)

Fiery, belligerent and often a little misguided, I think it’s safe to say that Farren probably made as many enemies as friends over the years, but it’s hard to deny that his heart was in the right place. Unlike so many of his generation, he stuck to his guns ‘til the end, living his whole life as a champion of what’s good n’ right in the world and a thorn in the side of the authorities who’d seek to oppose it… and I don’t know about you but I think that’s bloody brilliant. He’ll be much missed. 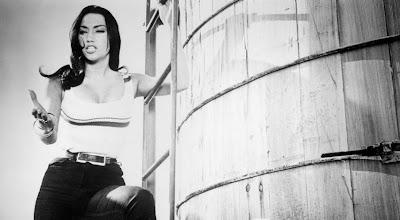 Another pussycat down. For those who’ve seen ‘Faster Pussycat… Kill! Kill!’, ‘Motorpsycho’ or ‘Supervixens’, Haji requires no introduction. For those who haven’t, what the hell are you waiting for – copies are out there (second-hand or bootleg for preference, the Meyer estate is still administered by swine as far as I’m aware), and a memorable triple bill awaits you.

Right hand girl to Tura Satana both on-screen and in real life (and if you’re gonna choose anyone’s shadow to stand in, etc..), Haji is portrayed in Jimmy McDonough’s Meyer biog ‘Big Bosoms and Square Jaws’ as a kind of hard as nails brain-fried hippie witch, and she seems to have played a big role on both sides of the camera, as a kind of benevolent earth goddess of the Meyer-verse.

As well as the aforementioned starring roles, she had a blink-and-you’ll-miss-it appearance in ‘Beyond The Valley of the Dolls’, and outside of Meyer-ville, she hit the silver screen in ‘Bigfoot’ (1970), ‘Ilsa, Harem-Keeper of the Oil Sheiks’, ‘Demonoid: Messenger of Death’ and (how’s this for a curveball?) John Cassavetes’ ‘The Killing of a Chinese Bookie’.

Few would deny that she was very awesome. 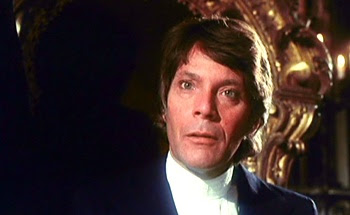 Lemoine seems to have found his niche in this particular fecund corner of European cinema, and, an extremely friendly and enthusiastic fellow by all accounts, he became a vocal fan and supporter not only of Franco, but also of Jean Rollin and Alain Robbe-Grillet, and appeared in films by Max Pecas and José Bénazéraf. In the early ‘70s, he turned to direction, helming numerous films over the next fifteen years, few of which anyone actually seems to have seen. Most of Lemoine’s directorial efforts were confined to the sex-film/porno ghetto (as Rollin fans will know all too well, this wasn’t exactly a choice for anyone trying to make low budget commercial films in France in the 1970s), but one notable exception is 1976’s excellently titled ‘Les Week-Ends Maléfiques du Comte Zaroff’, aka ‘Seven Women For Satan’, which enjoyed a very nice release from Mondo Macabro a few years back.

A definite weirdie with some extraordinary elements, and a strong late entry in the ECM cycle, ‘Seven Women..’ (also starring Howard Vernon and Joëlle Coeur!) wasn’t really a personal favourite of mine on first viewing, but thinking back, I definitely need to watch it again – the whole thing has the vibe of a kind of cracked, personal odyssey, and the image of a crazed Lemoine roaring around an unploughed field in a 2CV trying to run down some poor woman certainly stands out strongly in my memory. (Jeremy Richey has written a great appreciation of the film for the Mondo Macabro blog, which can be found here).

In the filmed interview included on ‘Seven Women..’s DVD release, Lemoine comes across as an effusive, elequent and genuinely lovely man, positively overflowing with memories and anecdotes on all of the antics referred to above. Following the deaths of Rollin, Franco and Bénazéraf in recent years, it is very sad to learn that another ubiquitous figure in this strange and fascinating netherworld of film-making has left us, his passing largely unheralded, and his wealth of memory and insight (as far as I know) largely unrecorded.

Nice touch, some great memorials there.

I've been looking for his early film Planets Against Us since I saw it as a kid. Another great loss to bizarre sinema.