The Sin File by Stephen Ransome 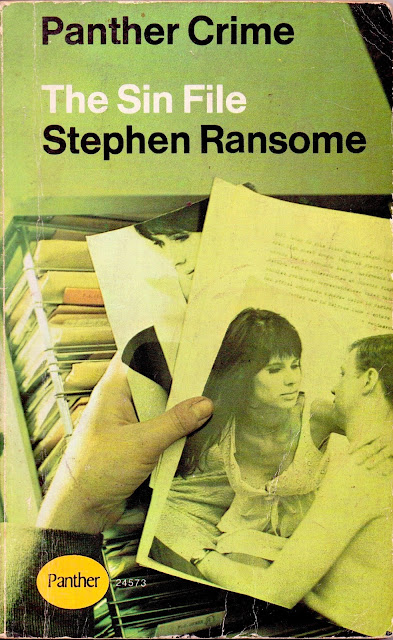 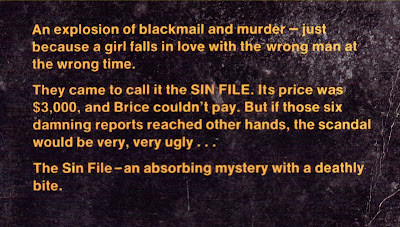 It’s amazing the variety of books you can find thrown out with the rubbish or offered up for free whilst traversing the streets and public buildings of the area in which I live. I mean, haven’t these people ever heard of charity shops? Or seen the volunteer-run community library just down the road?

Well thankfully for me, they apparently haven’t, and in the past six months alone, I’ve picked up a book of essays by Takashi Kitano, a ‘70s era karate manual, a hardback biography of Dashiel Hammett, novels by Richard Matheson and Elmore Leonard, a book purporting to explain ‘The Seventy Great Mysteries of Ancient Egypt’… and this little number, which was staring up at me from a sodden cardboard box on somebody’s doorstep when I took a stroll round the block a couple of weeks back.

Nice, subdued British sleaze kind of vibe that’s only enhanced I think by the faded colours. (Are they faded though? Perhaps they've always looked like that…)

Either way, nice example of another publisher jumping on-board with the Penguin-created connection between crime and the colour green, and, um… would it be facile to bother pointing out that ‘Ransome’ is a pretty fitting surname for the author of a book about blackmail..? “Research” suggests Stephen Ransome was a frequent pen name for prolific pulpster Fredrick C. Davis, so perhaps less than a coincidence.
Posted by Ben at 17:12