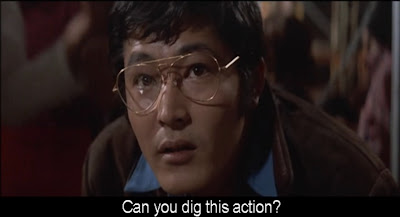 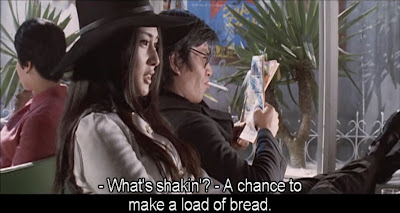 The second or possibly third entry in the Stray Cat Rock series (as they were filmed back to back and realised in pretty quick succession, the chronology is kinda unclear), ‘Machine Animal’ is a more substantial venture than Toshiya Fujita’s light-weight Wild Jumbo, but it’s still pretty throwaway stuff in the grand scheme of things, and can probably best seen as a warm up for Yasuharu Hasebe’s more accomplished work on the exhilarating Stray Cat Rock: Sex Hunter, released later the same year.

Far milder and less salacious than the Toei pinky violence movies that quickly followed, the ‘Stray Cat Rock’ films (with the notable exception of ‘Sex Hunter’) stick pretty closely to the format of post-‘Hard Days Night’ youth/pop music movies, assuming a jaunty, upbeat tone and interspersing their gang war/crime caper storylines with cod-psychedelic musical interludes, way-out fashion shows and assorted goofy montage sequences, rich in gratuitous split screen, camera swirl and other low budget visual effects. What differentiates these Japanese youth movies from their Western counterparts though is of course the fact that they’re prepared to go so much further with their counter-cultural mischief. Restrained as ‘Machine Animal’ may be in view of what came later, it’s still hard to imagine a similarly light-hearted American film in which the heroines get ahead in life by hot-wiring cars, fighting with knives and wantonly guzzling LSD, and it’s that spirit of unrepentant, amoral wildness that keeps us coming back to these films, helping to render even such comparatively minor efforts as this solidly entertaining.

And speaking of wildness, the promise of crazy shenanigans would certainly seem to be on the table when it becomes clear that the plot-line here concerns Meiko Kaji’s gang (the same one seen in ‘Sex Hunter’, to all intents and purposes) getting mixed up with a couple of lively characters who have arrived on their Yokahama turf harbouring an American deserter from Vietnam, and hoping to pay their way out of the country using profits from the 500 hits of acid they’re carrying. Crikey. Contemporary or what?

Sadly, our dreams of a wild sukeban trip sequence are never quite realised – the girls who initially sample the goods just act a bit dopey for a while then get over it, whilst limited means and sparse production design prevent the later ‘freak out’ sequence from really scaling the heights of psychedelic delirium the way we might have hoped, although it’s nice enough as far as these things go.

It’s also nice to note that, whilst they may have been slightly more enthusiastic about it than their American counterparts, Japanese filmmakers were apparently just as clueless about the emerging drug culture, as witnessed by the fact that LSD in the Stray Cat Rock world comes in the form of industrially produced pharmaceutical capsules that can be gulped down by the dozen with no apparent ill effects – a goofy detail that sits well alongside the ridiculous stream of beatnik-via-blaxploitation banter that the fan sub-titles on my copy of the film subject us to. (I mean, not that I’m saying the characters aren’t presumably busting out their best Nippon hep-cat moves at any given point, but if you’re reading sub-title dude, I’d love to know the precise Japanese vocab for “you jive turkey!” or “friggin’ dames!”)

Though it’s only fully manifested in ‘Sex Hunter’, one interesting aspect of all the SRC films – missing from many of Toei’s later PV flicks – is their political undercurrent, particularly as regards the tensions raised by the influx of foreign culture and foreign visitors into post-war Japan (even the air-headed ‘Wild Jumbo’ features buried crate of WWII weaponry and a scene in which Meiko Kaji and Tetsuya Fuji humiliate some American tourists). Of course much of the angst-ridden contradiction that makes ‘Sex Hunter’ such fascinating viewing arises from the fact that, socially and culturally speaking, these youth movie owe their entire existence to the influence of American culture, and as such, ‘Machine Animal’ seems to present a proudly internationalist vision of Japan, with scenes taking place in a Greek bar, a German bakery and an American bowling alley.

The presence of a sympathetically portrayed Vietnam deserter meanwhile seems like a particularly daring inclusion, especially as by far the film’s most harrowing moment comes when he’s mercilessly gunned down by Japanese police, in what seems like a clear nod to the agenda of Japan’s militant student protest movement. (It must be said however that the effectiveness of this storyline is undermined somewhat by one of the film’s strangest time/budget-enforced inconsistencies, vis-à-vis the fact that this brave refugee from the good ol’ USAF is portrayed by a bemused looking teenage Asian guy who speaks broken English in a broad Japanese accent.)

In keeping with a lot of other sukeban flicks, the girl gangers here are initially presented as being somewhat subordinate to their male counterparts, with the opening scenes seeing them riding as passengers with the male ‘Dragon Gang’, rather than conducting their own gang business. In fairness though, the plot does swiftly move in the direction of a male/female gang war (just like in ‘Sex Hunter’, actually), and ‘Machine Animal’ is one of the relatively few sukeban movies I can think of in which the girls actually DO get to do some bike-riding at one point.

But again, the inept / tongue-in-cheek execution of said sequence tends to foul things up a bit; “Jeepers! We need our Hondas!” Meiko (allegedly) exclaims about an hour into the film, and the subsequent scenes in which the girls putter about on two-stroke mopeds sporting groovy goggles & colour-coordinated helmets as they slowly negotiate a series of carefully placed ramps and obstacles are pretty hilarious to be honest – obviously shot as quickly and cheaply as was humanly possible, presumably without the use of any stunt personnel, and generally played for laughs.

And, as in ‘Sex Hunter’, the girls’ street gang abilities are compromised to the extent that they don’t even take part in the fighting during the movie’s final showdown, instead standing round helplessly as the two male heroes duke it out with their opponents – disappointing, to say the least.

Ah well. One thing Stray Cat Rock movies are usually good for at least is rockin’ music and awesome psychedelic nightclub scenes, and, although some of the incidental music is pretty square, ‘Machine Animal’ certainly delivers the goods in this respect. In the Astro Go-Go Club, the girls’ hang-out of choice, silver-clad girls dance suspended above the stage on an elaborate scaffolding type arrangement, whilst a female organist/flautist busts out some wild prog moves, leading a Sunset Strip styled garage band through a couple of loungey yet enjoyable tunes (a soundtrack note on IMDB identifies the band as Zee Nee Voo, if that means anything to Group Sounds aficionados out there). I’d love to tell you that Hasebe’s presentation of these performances matches the psychedelic splendour of ‘Sex Hunter’s club scenes, or the director’s earlier pop-art triumphs in 1966’s ‘Black Tight Killers’, but sadly that’s not the case, and again, things seem rushed, with unimaginative lighting and awkward jump cuts giving things of bit of a ‘70s Top of the Pops vibe (UK readers will know what I mean).

Elsewhere, Michi Aoyama – a singer/actress who turned up in at least a couple of other films for different studios during the ‘60s – makes a memorable appearance as a 12-string strumming folk goddess who hangs out in the aforementioned Greek bar, where she dissolutely belts out a couple of ballsy, low-register blues numbers that are genuinely rather fantastic. Further information on her life and career would certainly be welcomed, should anyone have any.

Meiko Kaji too is her usual cool self, with her trademark vengeance-hat present and correct and the solemn, untouchably bad-ass persona that she’d adopt in so many classic movies over the next few years already well in evidence – more-so than this material demands or deserves, really. It’s notable that her character doesn’t take drugs or join her sisters in the gang acid freakout, and maintains a discreet distance from the rest of the film’s goofy hi-jinks too. Basically it doesn’t take a genius to spot that she had her eye on more demanding, tonally ‘serious’ roles than Nikkatsu were offering her here. Naturally the beautiful, lonesome ballad she sings to an empty boat-shed is another of the film’s highlights (although sadly, for all his/her jive-talkin’ fortitude, the sub-titler of my copy has neglected to provide translated lyrics for the film’s songs – always one of my favourite aspects of watching these movies).*

Regular SCR male lead Tatsuya Fuji also fares pretty well in ‘Machine Animal’, as one of the two acid-dealin’, deserter-shelterin’ dudes, and Meiko’s presumed love interest. This time playing neither a raging psychopath nor an insufferable goon, he’s surprisingly effective as a kinda rough-hewn, free-wheeling leading man in the Peter Fonda mould, revealing some of the charisma that made him a minor star in the Nikkatsu cosmos, prior to his later ascent to cinematic immortality in Nagisa Oshima’s ‘In The Realm of The Senses’ in ’76.

If it seems like I’m concentrating a lot on such incidental detail here, that’s largely because the actual thread of this movie’s plot after the initial set-up has been established is crushingly simplistic and repetitious, as drugs, then money for drugs, then hostages go back and forth and back and forth between film’s feuding factions like some infernal merry-go-round, seemingly for a lack of any other ideas to keep the narrative ticking over, until we just want the damn thing to end.

Nonetheless, Hasebe does his best to maintain interest, throwing in a lot of the kind of “just for the hell of it” formal experimentation that the SCR series does so well, with split screens, slo-mo etc. all present and correct, helping to generate a real out-of-nowhere emotional charge for the film’s few serious/violent moments, and pointing the way toward the stylistic tour de force of ‘Sex Hunter’, a film that sees all the best elements hinted at here magnified ten-fold.

In keeping with previous ‘Think Pink’ entries, I’ve uploaded a few of the film’s best musical moments for you here.

*Although it may seem like I’ve dissed the poor subber(s) a few times in this review, I’d nonetheless like to earnestly thank them for their efforts – I realise it’s a lot of hard work for zero reward, and without their help I’d probably never get the chance to watch films like this one with even the slightest understanding of what was going on, so please, keep up the good work guys – it’s appreciated.
Posted by Ben at 22:03