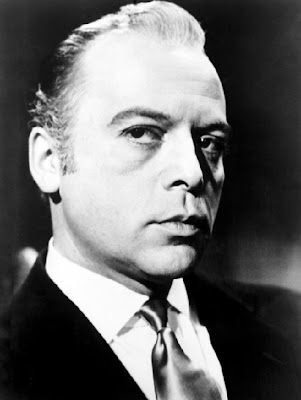 Sad to hear yesterday of the death of one of another one of those great “dude was in EVERYTHING” type actors, whose face fans of ‘60s and ‘70s movies have probably spent longer looking at than they have their own parents, the one and only Herbert Lom.

Funnily enough, I think Lom was perhaps the first non-household name character actor I ever learned to recognise and pay attention to, via his memorably unhinged performances in the Pink Panther films, which, like just about everything else in said movies, amused and interested me a great deal as an 11 year old. Since then his distinctive visage has popped up somewhere or other in just about every stage of my filmic education, and last Christmas, whilst idly watching the second half of “El Cid” on TV, my brother and I were amazed to realise that we could immediately recognise him solely via his eyebrows, in a role that requires him to spend most of the movie wearing a turban and facemask.

Closer to the stamping ground of this blog, it seems Lom never quite gets his due as a horror/genre star (perhaps because he pursued a successful mainstream career in parallel?), but just cast your mind back over some of the weird & wonderful stuff the guy was in over the years: Hammer’s underrated “Phantom of the Opera”, Jess Franco’s “Count Dracula” (bringing a surprising dose of gravitas to the role of Van Helsing, I seem to recall), “Mark of the Devil”, not mention being turned into a miniature killer toy robot Lom in one of the premier ‘WTF am I watching here!?’ moments in all British horror, in Amicus’s “Asylum”. Before that, he was in a bunch of great British noir/b-movies like “Hell Drivers” and “The Frightened City”, and hey, we haven’t even mentioned “The Lady Killers” yet. Then there’s Ray Harryhausen adventure movie “Mysterious Island” (1961), Massimo Dallamano’s unbelievable “Dorian Gray” (1970), Michele Soavi’s “The Sect”, Cronenberg’s “The Dead Zone”, spy movies like “Assignment to Kill” and “Our Man in Marrakesh”, Franco’s first WIP movie “99 Women”, and…. well, you get the idea. Dude was everywhere, and the sight of his eyebrows looming into shot is always a welcome one. R.I.P.

(Photo borrowed from If Charlie Parker Was a Gunslinger..)

'his memorably unhinged performances in the Pink Panther films, which, like just about everything else in said movies, amused and interested me a great deal as an 11 year old'

Afraid I'm still very much an 11 year old in that regard at least! RIP a wonderful actor.

PS: Totally OT, but I recently watched Berberian Sound Studio which I thought was a masterpiece, though it seems to have been very divisive both for genre fans and mainstream critics. I wondered if you'd seen it?

Hi Gregor - yes, I went to see 'Berberian Sound Studio' a couple of weeks ago when I saw it playing at my local cinema... predictably, I thought it was excellent (it pushes all my favourite aesthetic buttons really), but, to echo just about every review I've read, I thought it was basically missing an ending... it seems crude to say I was expecting a big reveal/finale from a film that's so obviously trading on ambiguity, but... it just felt unfinished, y'know?

Still, it established its world & premise beautifully, and was really engrossing viewing... kind of a flawed masterpiece I'd say - definitely the best 'new; thing I've seen in the cinema in ages. Hopefully I'll get a chance to write more about some time!

There are not a lot of actors whose performances lock in me in any film they make. Mr. Lom is at the top of the list. I'd been watching a UK series he made in the early 60s called The Human Jungle (the opening theme music is amazing too). Someone had posted several episodes on Youtube. As much as I dislike watching films on computers, I had no choice as this is not yet on DVD in the States. Lom is a Harley Street psychiatrist in this brilliant, well written drama. Soon after his passing, the shows were deleted off the site. If you ever get the chance to see any episodes, I recommend them as some of the finest work in a quality production that he ever did. Thank you for giving the world your talent, Mr. Lom.