When the celebrated illustrator and cartoonist Ronald Searle died in December of last year, I wanted to do a tribute post to him here, but felt that that post should consist of some choice examples of his work, rather than just pointless, poorly thought out words. Unfortunately though, my ability to present such examples was compromised by my failure to locate the volume that features all of my favourite Searle drawings, and furthermore represents my main point of connection with his work. Images available online proved generally unsatisfactory, and so, rather than cobble together some half-hearted obit post, I abandoned the idea.

Now though, the collection ‘Hurrah for St. Trinians’, published in hardback in 1948 by McDonald of London, and eventually purchased by me from a second hand bookshop in Shrewsbury for the princely sum of £2, is back in my hands, and we can proceed apace.

I have very fond memories of finding and buying this book, then sitting in the park with some friends, laughing ourselves stupid as we looked over the cartoons within. Why did we laugh so much? It’s difficult to explain really. After all, most of the ‘gags’ in Searle’s cartoons are pretty weak, bordering on non-existent, but… that’s not really the point. It’s the detail, immediacy and uncanny vitality of his artwork – sort of an unlikely combination of subtlety, precision and absolute dementia - that raises a fair few of them to the level of genius. ‘Mr Eccle Shave’ in particular has lived on in my mind, making me cackle at inappropriate moments, ever since.

As the venerable D.B. Wyndham Lewis puts it more eloquently in his introduction to the book:

“In a Parisian gunsmith’s window a short time ago I saw a delightful little automatic, handbag-size, with a butt of pink-and-blue enamel designed with Cupids and butterflies; just the thing for the Ritz cocktail hour. Encountering the satiric art of Mr. Ronald Searle in due course, it struck me at first glance that the infinite grace and finesse of his method of liquidating the Booboisie was strangely similar, but I was wrong. Mr. Searle is adverse to heat and noise. There is no bang, and his victims do not tumble off their stools in grotesque attitudes, interrupting polite conversation and annoying the barman. They subside quietly and very gently into decorative patterns and don’t know what hit them. It is, so to speak, a fine Florentine blade slipped with regretful courtesy under the fifth rib, and Mr. Searle is all too sadly aware that the Cinquecento engraving on the blade is wasted on those dopes.”

And so, without further ado, here’s the Florentine blade in action. 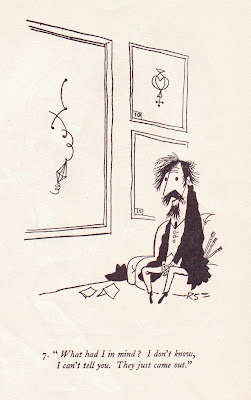 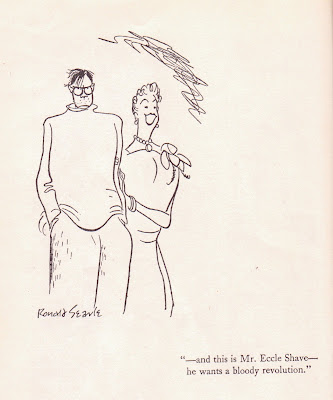 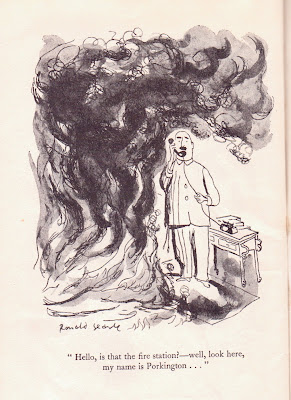 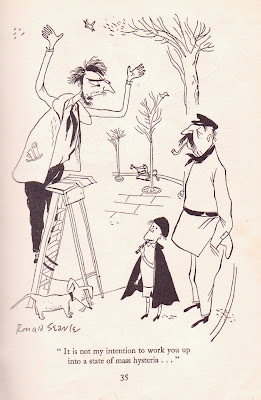 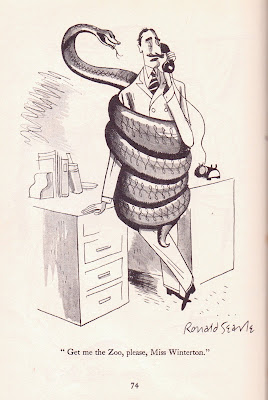 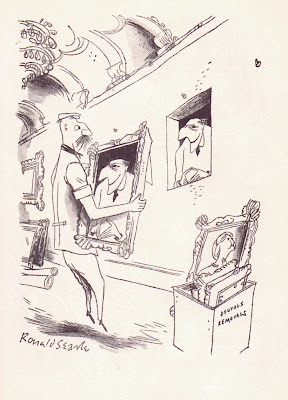 I love his books but it's a shame his stuff isn't exhibited more. I wonder what's going to happen to his archive? Probably go to somewhere in France?

Incredible artist. I grew up with the reprints of his "Molesworth" books and remember every line.