A World Without Borgnine. 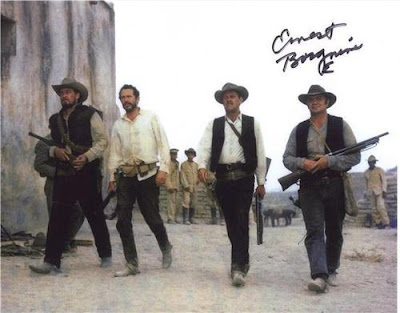 Sad news to wake up to this morning.

Still, he certainly had a good run; I bet there aren’t many movie people born during the First World War still going out to bat these days.

He’s an actor I’ve always really loved, so I wish I could do a proper, comprehensive obit and pick out a few under-appreciated gems from his vast CV etc, but sadly that’s not the sort of thing I’m very good at, at least as far as classic Hollywood and suchlike is concerned. I guess I’ve always just known him on a “that awesome guy who’s always turning up in stuff” kind of level (“oh man, I forgot Borgnine is in this thing too!”), so I’ll leave the precise details to those who know.

Although it’s a film I bet he got sick of constantly being associated with, I’ll admit that I saw him most recently when re-watching ‘The Wild Bunch’, the obvious quality of his performance in which needs no additional boosting from the likes of me. The DVD I watched it on has a great commentary track, in which the assembled Peckinpah experts who’ve been brought together to offer learned insights basically just *lose their shit* and give in to the childlike excitement of sitting in a group watching such a fantastic film. I recall that there are several points at which they drop any semblance of historical / analytical discussion and just start going “Look at Borgnine! Look at Borgnine!” Sound advice for watching just about any scene he ever appeared in, I should think. Dude just seemed to act with every muscle in his body – one of those people whose presence could improve just about any film ever made.

(PEDANTIC NOTE: Whilst on the subject, I’ve read a couple of obits on the web today that have noted that Borgnine is the last of the The Wild Bunch to die, but I can’t help feeling that’s not quite accurate. Whilst it’s true that he was the last man standing from the four who head out for the final confrontation pictured above, IMDB confirms that Jaime Sánchez, who played Angel, is still alive and kicking, and I don’t think Borg’s character would have wanted us to leave him out. [And the fact that I care about what a fictional character in a 45 year old movie might think has got to tell you something...])

Oh, and closer this blog’s usual territory… why haven’t I seen ‘The Devil’s Rain’ yet..? 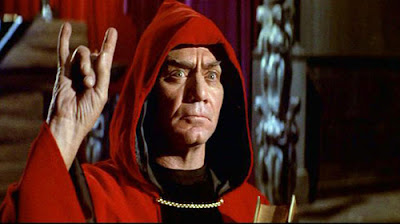 Surely a vital contribution to the extremely specific sub-genre of “70s backwoods Satanist movies that inexplicably feature great Sam Peckinpah-affiliated actors” (also see ‘Race With The Devil’ (1975) and ‘The Brotherhood of Satan’ (1971)).
Posted by Ben at 13:26

Wonderful actor; TCM ran a tribute the other night and replayed the discussion with Robert Osborne. They aired a film that hasn't been seen in decades, Pay Or Die, a very good mafia film with Borgnine as Lt. Petrosino. A very neglected gem.