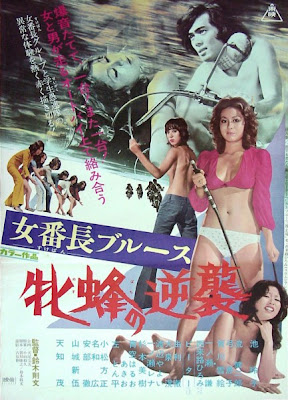 In a significant departure from my usual secluded anglophone existence, I’m actually visiting Japan next month. So, by way of psyching myself up for that, what better excuse could there be for a series of short(ish) reviews relating to that country’s most universally beloved cultural export (ahem) – the early ‘70s cycle of ‘Pinky Violence’ movies!

Sure, it’ll be a bit of a culture shock after all the comfortable British horror and sci-fi I’ve been covering recently, but just imagine how the poor customs officers at Narita airport will feel when I turn up with my tweed suit and elephant gun.

The precise definition of the ‘pinky violence’ sub-genre is of course the subject of much confusion and disagreement in the West (and probably in the East too for that matter). I’m not going to bother going into all that here, but for those unfamiliar with the form, the concise primer found here is recommended reading, and nicely delineates the specific usage of the term as I’ll be applying it in these posts.

Of course, just for the hell of it, I’ll probably end up throwing in write-ups of a few Japanese films that fall way outside the acknowledged boundaries of the genre too, but I’ll do my best to make such distinctions clear from the outset.

And as an added bonus, I’ll try to throw in translated lyrics and brief mp3s of some of the absolutely fantastic Enka theme songs featured in *every single one* of these movies, where possible.

All clear? Well, chocks away then.

(The poster reproduced above is for ‘Girl Boss Blues: Queen Bee’s Counter-Attack’, image borrowed from Pulp International.)
Posted by Ben at 21:30

I'm with you, Ben. I'll probably join you this month with some write-ups on some Girl-Boss flix. Looking forward to reading your work.

I'm going to put the first review up later today, and have more on the way...