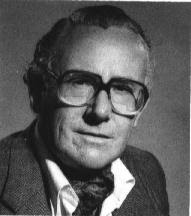 Yet another obit in a bad winter of notable mortal coil departures (Ronald Searle, Dorothea Tanning amongst others would/should have been covered here had I more time and resources to do them justice), this week I was sad to hear (via Between Channels) about the passing of one Samuel Youd, better known as veteran sci-fi / thriller writer John Christopher.

It’s difficult for me to really assess the work of John Christopher, because in truth I haven’t read any of his novels for the best part of twenty years, but the ones I read as a child had a massive impact on me, helping to propel me toward independent reading of grown-up books for the first time, and (along with John Wyndham and assorted Dr Who novelisations) establishing a love of British science fiction and end-of-the-world adventure stories that endures to this day. 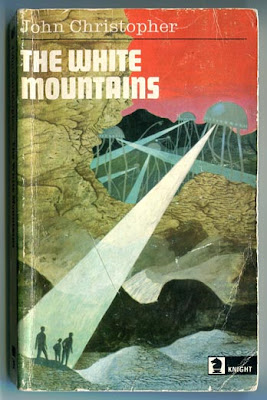 I don’t remember whether I read his trilogy of Tripods books (‘The White Mountains’, ‘The City of Gold and Lead’ and ‘The Pool of Fire’, all published 1967/68) for the first time myself, or whether they were read TO me (I was that young at the time), but either way, I was absolutely mad for them. I remember going into primary school and boring my fellow pupils for hours about the finer details of these great, epic stories I’d been reading. In my memory, they were enthralled, but more likely they were just bored and wondering what the hell I was going on about.

In retrospect, the books sound like a lively mash-up of familiar sci-fi tropes – a ‘what if the aliens in War of the Worlds had won?’ type scenario mixed up with plenty of Invasion of the Bodysnatchers mind control paranoia and served up in the form of jolly Young Adult fantasy quest narrative. It’s great though to think back to a time when my mind was a sufficiently clean slate to allow me to be completely enthralled by these now-familiar notions, to when the end of every chapter was an unbearable cliffhanger and any book over 150 pages seemed like an epic of Count of Monte Cristo proportions.

I’d imagine the kids in the Tripods books were probably pretty stock characters, but I cared about them all deeply, and was pretty moved by the comparative seriousness and realism of their battle against the implacable alien menace. I remember one of the books ending with a character being smuggled inside the Tripods city (where, rather oddly, the unnervingly alien triangular baddies set about whipping him with laser beams and adopt him as some sort of pet), and thinking, jesus, he is actually INSIDE their CITY, and gets to see them outside their armour? That’s insane! That cannot be!

Such is the sense of forbidding, imaginative grandeur that a good author can so quickly establish in written sci-fi – so different to the production value-deprived movies and TV series I could have been watching instead, with characters barging around shoddy looking forbidden zones like their lives depended on it. 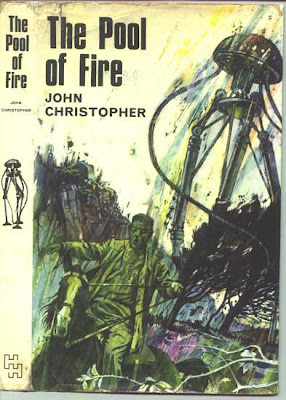 I was vaguely aware that the BBC had made a Tripods TV show a few years beforehand, but to this day I’ve never seen it – I think I saw a few photos and immediately realised it would pale in comparison to the imagery the books had established in my imagination. The beeb themselves seem to have realised this too when they decided not to adapt the second and third books, despite the apparent success of their first series – hardly surprising, given that re-reading the plot synopses for this post reminds me that they would have called for scenes of global upheaval, burning alien cityscapes and mass zeppelin bombardment.

Anyway, rather than turning to TV, I was more interested in tracking down Christopher’s prequel, the bluntly titled ‘When The Tripods Came’ (1988). I found a copy in the library and nearly flipped my lid when I saw that the cover depicted a tripod fighting a tank! 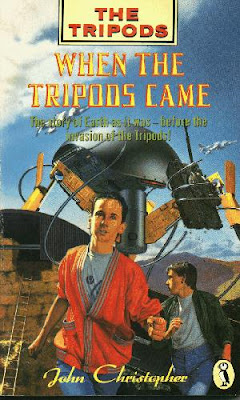 From what I recall, the book failed to really live up to the idylls of brutal interplanetary carnage I was hoping for, and was actually more of a faintly reactionary paranoid sci-fi yarn, detailing how the Tripods enslaved humanity by means of – funnily enough - a hypnotic, simpleminded TV show that their mind-controlled slaves pushed into production (shades of Quatermass II or Kneale’s script for Halloween III maybe?). This was ok, but what I REALLY liked about the book was the way that Christopher took the concept the whole distance, setting things up for a cracking end-of-the-world story in the second half.

I loved the gradually rising tone of panic and hysteria (the exact same effect employed by J.G. Ballard in his early natural disaster novels), as what starts out merely as a minor annoyance becomes a growing worry, then a definite problem, and finally a complete apocalypse, with our protagonist’s grumpy decision not to watch a particular TV show eventually leading him to a desperate flight across wartorn, Tripod-dominated Europe to join the resistance in the Swiss alps. Just think on that the next time you purposefully ignore some kinda fancypants HBO shit your friends are trying to get you into! Christopher already had pretty mighty past form in the sphere of apocalyptic sci-fi by this point of course, and, being a kid with an unhealthy interest in such things, it wasn’t long before I found my way to probably his best known book, 1954’s ‘The Death of Grass’. By this time I was a year or two older, reading frown-up books for myself, but it bowled me over just as thoroughly as the Tripods had. A bleak and sombre work that sits neatly next to Wyndham’s masterpieces from the same era, it’s clearly one of the defining works of the ‘British apocalypse’ sub-genre, and I recall it being by far the grimmest too, as Christopher picks up the old ‘fine line between civilisation and savagery’ theme and really runs with it. I was particularly horrified/impressed by a sequence in which our ‘heroes’ stumble across a family who are sheltering in a remote farmhouse, and promptly shoot the parents, steal their food supplies and move on. I’d never read a story in which people we were supposed to side with did things like that before. And rarely since either, come to think of it. Dark stuff. 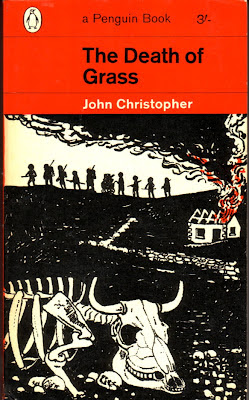 I liked the iconic Penguin cover art (illustration by John Griffiths) a lot too. It’s probably more than a coincidence that when I started trying to write my own end-of-the-world tales as a teenager, charred fields and skeletal cattle featured prominently.

I recently acquired a new copy of the Penguin edition in quite good condition, along with a copy of Cornel Wilde’s 1970 film adaptation ‘No Blade of Grass’, and had been planning on catching up with both of them this year.

And that’s that really. I moved on to reading other stuff, never really thought to further investigate John Christopher’s life or wider career, and here we all are. But for those early reading experiences, I owe him a lot. 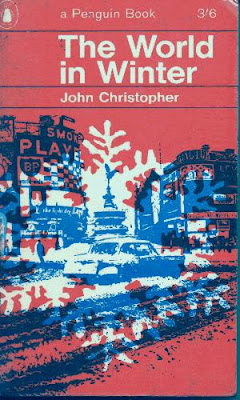 As the bibliography on his wiki page reveals, Samuel Youd wrote prolifically through the ‘50s, ‘60s and ‘70s under no less than seven different names, following up the success of ‘The Death of Grass’ with a series of similarly themed end-of-the-world novels under the Christopher name, including ‘A Wrinkle in the Skin’ (earthquakes), ‘The World in Winter’ (new ice age) and dystopian class warfare fable ‘The Guardians’. His output seems to have slowed from the ‘80s onwards, with only one novel published during the ‘90s, and the final John Christopher book, ‘Bad Dream’, appeared in 2003.

According to biography on the inside cover of my copy of ‘The Death of Grass’, “John Christopher is married and has two children. His principal recreations are listening to music and, when the English climate permits, watching cricket.”

Enjoyed reading this post. I’d guess you’re roughly my age (30, can't believe it!) so it brought back memories. Funny how fogeyish British sci-fi/horror culture was until fairly modern times, if it’s possible to be a fogeyish geek I’d guess I was one. The pic of the robot attacking the tank reminded me of an early 90s edition of Day of the Triffids I saw as a teen with Californian style architecture and clothing. I seem to remember that the book itself has a scene when the narrator meets a woman in a London full of maimed people and man eating plants and she expects him to be shocked because she wrote a dirty book at one stage of her life. Don’t know what Wyndham/ Youd would make of the trendy cover art.

Thanks for that. Have been a great fan of his particular post-apocalyptic writings over the years. 'Empty World' was due to be made into a film in recent years but I've heard nothing more about it. The BBC did make a second series, based on the second book & the aliens look pretty decent, as does the city, but the endless scenes of wine-making & severe lack of Tripod action in the first series probably bored half the audience to tears. His book 'The Little People', based in an Irish castle, has one particular cover where leprechauns in Nazi uniform appear to be dancing in a conga line. Well worth seeing, as you can imagine! As an Irishman, the mind boggles! Anyway, sad to read of his passing. Along with Wyndham, his vision of an eerie Britain lingers long after ye've put the books down. Thanks for an amazing blog & keep up the good work...

Hi Gregor – yes, I’m sure I had that exact same edition of ‘Day of the Triffids’ when I was growing up! In fact almost all the Wyndham and Christopher books I read in the late ‘80s / early ‘90s had terrible cover designs – it’s interesting to look at the ‘Art of Penguin Science Fiction’ website and see how their packaging of those books reached a peak in the ‘60s and ‘70s and then collapsed into complete ugliness.

And I know what you mean about being a ‘fogeyish nerd’ too – really I’m far too young (yes, born 1982) to feel nostalgic about stuff from the ‘70s, but even as a kid I seemed to like digging up esoteric old stuff to enjoy, rather than living in the present. For some reason I was really into Dr Who, during the period when it was off the TV, not available on video and nobody could care less about it... how does a ten year old make those kinds of decisions? I’ve no idea.

Thanks for your comment Dave – much appreciated! Yes, I remember seeing scans of that ‘nazi leprechauns’ cover around the place – absolutely insane, what were the publishers thinking etc? (Having said that, I know I’d buy a copy in a second flat, so perhaps they knew exactly what they were thinking.) I’ll assume that the cover doesn’t reflect what actually happens in the book… or at least, I hope it doesn’t. Sounds like an interesting one, either way.

I'm 53 and his Tripod trilogy was my introduction to science fiction. Amazing how those picks resonate with some of us. I read many other of his post-apocalyptic books as well. I remember nearly getting into a fight with a friend when we discovered a new "Christopher" in the library at the same time.
It's too bad you missed the "psychedelic" covers his books had when they were released.

OOps, meant "those books" in the previous post. I will learn not to type when tired.