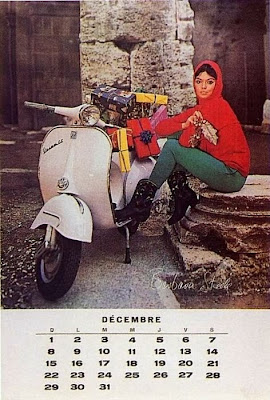 Sitting ‘round the fire (or nearest social acceptable equivalent) cradling a brandy of a midwinter eve, what better way to bypass the barrel-scraping nausea of Christmas TV schedules than to cue up a few good gothic horror movies?

In actuality, the ones I’m going to cover are films I’ve watched at various points over the past six months or so, but tis the season for such things (as far as I’m concerned), so what more excuse do ya need?

I’m going to try to do one a day across the yuletide period (notwithstanding the few days off before / after New Year’s Eve, during which I’ll be out of the country), but don’t hold me to it.
Posted by Ben at 22:16

Is that Barbara Steele posing with a late 60's Lambretta? Hell yes! And it's signed? I ride a late '68 Lambretta and I love Babs. Me want.

It's just something I found on tumblr though I'm afraid, so I'm clueless as to which year it's from, or what kind of calendar... (it does make me wish Barbara Steele had been in some kind of zany Christmas movie where she plays a mod though).

Totally! Barbara would have been a sexy mod!