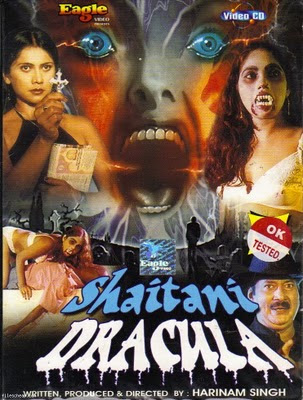 A couple of years back, Keith Allison of Teleport City posted a review of an absolutely astounding discovery: ‘Shaitani Dracula’, directed by one Harinam Singh.

It’s a great review and a good example of why Keith is one of my favourite film writers - you should read it. Maybe you shouldn’t read it quite yet though – I guess I can’t help but feel that the justifiable hyperbole the review layers upon this singular cultural artefact might spoil the surprise that lies in store for the innocent viewer.

For yes, viewers we shall be. After a conversation with my brother last week in which the subject of insane third world horror movies was broached, we exchanged a bunch of youtube links that led me toward the discovery that, somewhat inevitably, some maniac has uploaded ‘Shaitani Dracula’.

What can I say – everything the Teleport City review claimed of it is true. I could drivel on at length about my picks for the most crazed/note-worthy/hilarious aspects of this… well, I hesitate to call it a ‘movie’ as such… but I’d basically just be treading ground already covered in Keith’s review.

I’ve been thinking a lot recently about the process whereby weird/’bad’ films can reach a certain critical mass of disjointed abnormality, a point at which they cease to be subject to kind of expectations and judgements we usually apply to narrative cinema, and in fact cease to really function as ‘films’ at all, instead taking on a new life as… something else - some nameless and fascinating form of outsider art that happens when strange people and movie cameras collide?

We may laugh when we see these ‘films’ – often we will laugh uproariously, laugh until we’re blue in the face – but it would be wrong to assume that we are laughing AT them. As someone (Nietzsche I believe, although I’m damned if I can find the quote online, so maybe it was someone else) once observed, laughter exists to fill the space left by an emotion that has died. Thus we laugh simply because we don’t know how else to react to the impossible reality of these things, the fact that not only did human beings create them, they actually placed them before us as prospective entertainments.

‘Troll 2’ is a good example of one of these un-films, ‘Manos: The Hands of Fate’ is another. ‘Roller Blade’ and its sequels, for sure. ‘Awakening of the Beast’. ‘Zombie Lake’ is borderline. I’d make the case for ‘Astro-Zombies’, though some might argue it’s a bit too self-conscious. ‘Future Hunters’ (another Teleport City discovery)! ‘Tales from the Quadead Zone’ anyone..?

Well you get the idea. So let’s just say that ‘Shaitani Dracula’, if not necessarily the most rewarding, is certainly the most extreme example of this kind of un-cinema I’ve ever seen. Either the absolute bottom of the barrel, or the shining peak of the mountain, depending on which way you look at it.

On a more prosaic level, it blows my mind that apparently ‘Shaitani Dracula’ was made in 2006. I dunno – 1986 or 1996 I could have handled, but 2006!? It just seems astounding that this level of naivety could still exist. Not that I’m suggesting that some quantum leap in cultural sophistication has taken place in the past fifteen year or anything, far from it, but, y’know…. we had the internet in 2006. Ok, so maybe people in rural India didn’t ‘have the internet’ as such, but Harinam Singh is evidently the owner of a few shiny 4x4 vehicles, and a movie camera, and whatever kind of resources it takes to get a seemingly endless number of attractive girls to hang out in the woods with him in revealing outfits – I’m sure he could have sorted himself out with a net connection. I’m sure he could have, I dunno… watched some films? Maybe read some Wiki pages on the basics of cinema? Perhaps he could have found a guidebook explaining how to set up his camera properly? But no – apparently he’s a busy man. Instead he just went for it. ‘Shaitani Dracula’ is the result.

So, the time has come. Let’s meet up on the other side, and we can talk about it.

Oh, and look out for the bit with the ducks.

(Purely by coincidence, whilst I was preparing this post earlier this week, I discovered that Todd Stadtman of the Die, Danger, Die, Die, Kill! blog posted a podcast in which he and an esteemed colleague discuss ‘Shaitani Dracula’ at length, alongside the similarly brain-breaking Thai film ‘King-ka Kayasit’ aka ‘Magic Lizard’. It’s a really entertaining and informative listen, throwing in a lot of background info on Harinam Singh, and the kind of culture that led to the creation of this extraordinary film, along with many additional chuckles.)
Posted by Ben at 11:04

'taking on a new life as… something else - some nameless and fascinating form of outsider art that happens when strange people and movie cameras collide?'

I know I've mentioned The Room before, but it has to be the ultimate proof of this. In American viewings fans throw footballs, dress up as their favourite characters, throw spoons at the screen etc. It really does have a life of its own that a made for TV movie that's just rubbish without wanting to be much else does not have.

A friend and I have watched it 3 times; it really is a phenomenon.

Yes, somehow I've still not seen The Room - there have been a few screenings of it around, but I keep missing them for one reason or another... might have to pick up a DVD copy the next time I've got some money for a movie spending spree.

My current list of UN-films are all horror/fantasy of some kind or other, so it would be good to have a 'real world' example to add to the list...

I just watched the first 30 seconds of that video and that was enough to floor me. I can't believe anything that grotty-looking could've been made even in India just five years ago. I'd have sworn it had to date from 1990 or so until I read the comment on Keith's review confirming it actually is that recent. So clearly I must download the entire damn thing now (wish I could also save YT subtitles, but I don't suppose knowing what's being said will enhance the experience somehow)...

Yeah, I kinda suspect subtitles might ruin the experience a bit... surely a lot of these random people wandering on and off screen must just be making ad-libbed jokes about what a crummy movie this is etc, and watching Dracula going "blah blah blah DRACULA, blah blah DRACULA" throughout the whole thing wouldn't be half as much fun if we knew what he was actually going on about (aside from DRACULA)...