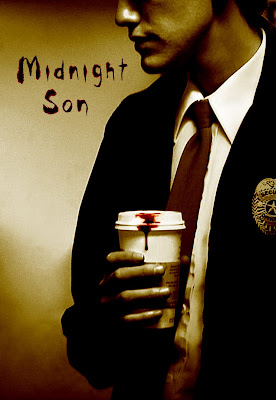 The only flick I managed to catch this year on Frightfest’s smaller ‘discovery’ screen, the unsatisfactorily titled ‘Midnight Son’ wasn’t one I picked out specially or anything – it just happened to be on when I had a film-length hole in my schedule, and I’d already paid for a day pass, so hell, why not. I’m glad I made the effort, because it was pretty good.

Shot on HD Video on what was presumably a non-existent budget, the festival blurb for ‘Midnight Son’ describes it as following in the footsteps of Romero’s ‘Martin’, but really I think it’s closer to a West Coast equivalent of Abel Ferrara’s ‘The Addiction’. Guess that wouldn’t pull the punters in quite so well though.

Anyway, ‘Midnight Son’ invites us into the life of a poor young chap who works the night shift as a security guard in a corporate office building. Seems he has a bit of a skin condition that prevents him from going out in the sun much, and in his spare time he likes to sit in his dingy basement flat painting pictures of sunsets. Understandably feeling a bit washed out, he pursues the kind of remedy that macho doctors in the ‘50s probably used to prescribe to young men with mysterious ailments: vigorously eating a blood red steak and spending the evening chatting to a girl he met selling cigarettes and candy outside a nightclub. This dose of protein and human companionship seems to perk him up no end, but as the working week goes on, the familiar fug descends again, and his discovery that blood works better than coffee as a pick-me-up leads him inevitably toward some rather more unsavoury habits.

So far, so familiar, but the film’s tone of smart, low-key realism goes a long way toward side-stepping the clichés that usually accompany this kind of story, stringing us along effectively enough to make the character’s gradual realisation of his vampiric nature seems both interesting and surprising, as much as we knew it was coming. The awkward quasi-relationship he develops with the similarly troubled young woman is very well played – a combination of her matter-of-fact drug problems and his matter-of-fact vampire problems amusingly conspiring to prevent them ever managing to have a nice evening together.

Although not exactly big on jollity to begin with (thinking about it, this is actually the only film I saw at Frightfest that didn’t have a significant amount of humour running through it), the film takea a darker turn when our man finds himself hanging around by the contaminated waste bins behind a hospital, forging a dubious alliance with a wannabe-gangster porter that eventually leads the story into the realms of a full-blooded (sorry) vampire/crime epic. Here, the video shooting actually works in the film’s favour, allowing for the creation of a believably cold and threatening nocturnal Hollywood underworld, very much reminiscent of the street scenes in Lynch’s ‘Inland Empire’, and thankfully entirely devoid of the kind of dated goth/industrial hoo-hah that usually blights movies like this.

The mumbling indie relationship stuff manages to merge convincingly with the final-third shift into brutal noir crime story stuff, and if ‘Midnight Son’ does have a few of the drawbacks and unintentionally goofy moments that go hand in hand with such DIY, zero budget productions, they’re not worth bothering to go into here. By and large, I thought it was a very impressive piece of work, standing way, way, waaaay above the baseline for SOV horror. If you can stomach a heavy quotient of ‘grainy close-ups of pale, miserable people breathing heavily’ type stuff and aren’t sick to the back teeth of the kind of story that the DVD back cover blurb would probably describe as a ‘gritty urban vampire fable’, this one is well worth making time for.

Oh yeah, and another cool thing about this film – Tracey Walter, Miller from ‘Repo Man’, is in it! Yeah, y’know – “plate of shrimp”, “John Wayne was a fag”, “..you’ll see” – that guy. Always good to see him getting work, even if it is presumably unpaid in a micro-budget horror film. [Clarification: after checking IMDB, Mr. Walter is clearly not short of work – dude’s been in everything; wow, I had no idea.] 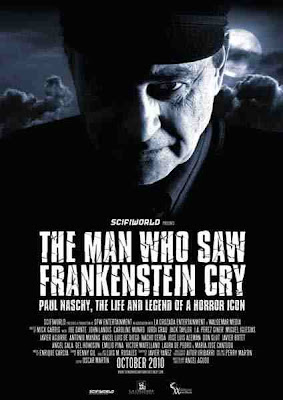 Speaking of dudes who get a lot of work done for precious little recognition, it was depressing to see such a small turn-out for the screening of this documentary about the man Michael Weldon wryly described as ‘Spain’s most popular werewolf actor’, the one and only Paul Naschy.

Despite being presented as a tie-in with the Scala Forever season, only about half a dozen lonesome guys and a couple of couples made it into the auditorium to catch this one, perhaps reflecting the sketchy distribution and mangled presentation of Naschy’s films in the English speaking world. Although most of them are barely available at all in legitimate form, in the past year or so I’ve managed to scrape together a fair selection of the many, many horror films Naschy wrote and starred in during the ‘70s, and from what I’ve seen so far, you can count me a fan.

Whether at a career high watermark with 1971’s Leon Kilmovsky directed ‘La Noche de Walpurgis’ (aka ‘Werewolf Shadow’ aka ‘The Werewolf vs. The Vampire Woman’) or wallowing in a mass of straight to video shlock through the ‘80s and ‘90s, it seems like Naschy was one cat who was ALWAYS on form, his name guaranteeing a certain mixture of good-natured monster bashing, gleefully amateurish gore, brain-melting un-scripting and unhinged atmospheric weirdness that never gets old… assuming you’re the sort of misfit who enjoys it in the first place. Personally, I think it’s wonderful stuff – I’ll have to get around to doing some reviews at some point.

As a documentary, ‘The Man Who Saw Frankenstein Cry’ isn’t exactly up to much – basically an extended DVD extra, it doesn’t have a lot to offer beyond an uncritical synopsis of the man’s life and career, interspersed with clips from his movies and talking head interviewees talking about what a great guy he was. But Naschy (real name Jacinto Molina) makes for a fascinating subject, and I don’t see anyone else queuing up to make documentaries about him, so I guess this one wins by default.

Beginning on an interesting note, it tells us all about Molina’s traumatic upbringing during the Spanish Civil War, and his subsequent education in a Nazi-centric ‘German school’ (a clip from one of his ‘80s movies that shows his character violently tearing up pictures of Hitler, Franco etc, cursing their evil legacies, seeks to leave us with little doubt as to what young lad’s feelings on all this were), before we follow him through his initial career as a boxer and bodybuilder. Subsequently working as a gopher in the nascent Spanish film industry as domestic productions began to get off the ground in the ‘50s, Molina initially saw himself breaking into pictures as an art director, and wrote his first werewolf script just in order to have something fun and fantastical that he could hopefully persuade some international backers to let him work on. Legend has it that it was only at a last minute production meeting after their proposed star dropped out that Molina was reluctantly (it says here) persuaded to take on the role of the wolfman himself. Needless to say, the barrel-chested human dynamo took to this assignment with such gusto that his performance helped make 1968’s ‘Las Noches del Hombre Lobo’ (released in the US as ‘Frankenstein’s Bloody Terror’, despite a palpable lack of Frankenstein) into a big hit, and, well – the rest is history, of a sort.

In between the endless personal tributes, generalised hagiography and overbearing music cues, the thing that comes across most strongly in this documentary is a sense of Naschy/Molina’s extraordinary work ethic and unwavering dedication to his own strange corner of cinema. From his initial breakthrough in the late ‘60s through to his death in 2009, it seems that barely a day went by when this man wasn’t busting his ass trying to make some weird movie or other a reality, ploughing on through financial collapse, personal tragedy, government censorship, health problems, disappearing distribution networks and public disinterest to keep his various projects rolling, taking in a long series of Japanese co-productions, an unexpected left turn into oddball thrillers and controversial ‘issue’ movies, and a late career revival aided by American trash-mongers like Brian Yuzna and Fred Olen Ray.

In the final analysis, Naschy has a neat 100 films to his name as an actor on IMDB, 43 of which he wrote, directed or otherwise co-produced. Such a body of work is quite an achievement in itself, and the consistency of vision he seems to have maintained across the decades is remarkable. Of course, a lot of people would argue that such consistency simply means his films were consistently crappy, but who cares what they think? Have they ever made a movie in which a werewolf fights a yeti, or one where the disembodied head of Torquemada freaks people out in nocturnal visions, or where a secretly devil worshipping Indian guru fights zombies with a broadsword in a London cemetery? I think not. The level of basic craftsmanship and goofy invention in Naschy films is always a delight, and say what you like about them, they’re great pieces of demented, gut-level entertainment that are rarely dull, even when they’re almost completely incoherent.

If such eccentric figures as Jose Marins and Jess Franco can become international cult movie heroes then I think Paul Naschy is long overdue his day in the sun, and it would be the greatest gift a horror fan could ask for if some DVD company or other could finally set about reconstructing some nicely transferred, uncut versions of his films before the financial viability of DVD releasing goes down the plughole, leaving us to make do forever with the fuzzed up public domain atrocities currently on the market. If you’re listening out there Anchor Bay or Arrow or whoever, I’ve got money in my pocket and a Paul Naschy Box Set sized gap on my shelves. Make it happen.

Following the Naschy documentary, my plan had been to hang on to catch the 11:30 screening of the fun sounding flick ‘Detention’, but to be honest, I was pretty worn out by this point – I had a splitting headache, and there was still an hour to go before that then, and I just couldn’t face the idea of killing yet more time hanging around the multiplex lobby drinking overpriced, metallic beer or aimlessly wondering the streets before fighting my way home on the nightbuses after the movie finished at 1am-ish, so… I’m sorry readers: I went home instead.

I know, what a wuss. As I sit here sneakily writing this on a rainy afternoon in work, I would absolutely love to be hanging out with a crowd of boozed up horror fans, watching some rip-roaring alien/zombie/high school movie, but on the night it just wasn’t gonna happen.

That aside though, another year of fine and varied programming from this festival, with even a lot of the films on the big screen serving to challenge the mainstream clichés of modern horror, and filling me with a lot more optimism for current genre cinema than I’ve felt for some time, I guess. Good stuff – looking forward to next year, etc.
Posted by Ben at 13:55