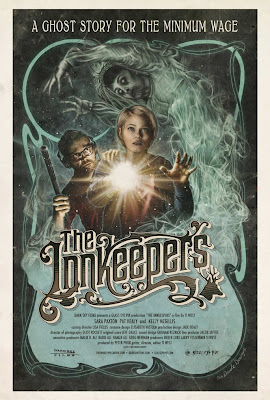 Ti West’s ‘House of the Devil’ very much impressed me as a semi-abstract, post-modern horror movie, and if this follow-up is ultimately a less distinctive piece of work, one can hardly blame the director for striking out in a slightly more commercial direction, foregrounding characterisation, humour and reassuring ‘boo!’ moments over weird, minimal dread.

Strong ‘Shining’ vibes are in evidence from the outset here, as the credits roll over a series of faded photographs of a town centre hotel in its historical heyday, leading gradually up to the present day, where we join the establishment's last few minimum wage staff members, sitting out a marathon weekend shift before the place finally closes down for good.

Like ‘House..’, ‘Innkeepers’ goes for the looong slowburn before any horror stuff gets going, and your overall enjoyment of the picture will likely hinge on your tolerance for the bitchy, Clerks-esque chemistry between the two leads - directionless teen Claire (Sara Paxton) and slightly older college dropout Luke (Pat Healy). Personally I very much enjoyed their shenanigans – I thought both performances were very good, and that the script built them up nicely as strong and individually motivated characters whilst keeping things just on the right side of whiny. Individual tastes may vary however – if you don’t have much sympathy for these kinda flawed, slacker-ish characters and their assorted bellyaching, you could be in for a tough ride.

Anyway, Claire and Luke are rather half-heartedly trying to investigate paranormal phenomena in the hotel, running a Geocities-style website full of hilariously unconvincing videos of doors slamming and ‘unexplained bathroom incidents’, and stalking the corridors at night with a tape recorder, in search of ‘EVP recordings’.* As you might assume, this investigation provides the hook that leads us straight into a wholly traditional haunted house narrative.

Aside from the aforementioned nod to ‘The Shining’, the big reference point here is, inevitably, Robert Wise’s ‘The Haunting’, from which ‘The Innkeepers’ inherits its emphasis on strong characters, its pattern of slow-building set-piece scares and its atmosphere of gradually escalating hysteria. Indeed, the only other real character in the movie, a TV actress turned new age healer played by Kelly McGillis, seems very much like an older, more washed out version of Theo the psychic from Wise’s movie.

Such similarities can hardly be seen as derivative though, or even deliberate. Wise’s film casts such a definitive shadow over the haunted house sub-genre that all these elements are pretty much mandatory. In fact, ‘The Innkeepers’ is notable for the extent to which West seems to pull back from the haze of referential imagery and horror-fan nostalgia he perfected in ‘House of the Devil’, instead inviting us to see his film as a free-standing, wholly contemporary effort. And this, sadly, is where it falls short.

Like both ‘House of the Devil’ and ‘The Haunting’, ‘Innkeepers’ is extremely well-constructed, and will scare the pants off you exactly as it sets out to – seeing it in the cinema, I won’t deny that I was watching a lot of the later scenes through gaps in my fingers. Unlike ‘The Haunting’ though, the film crucially fails to really tie any psychological depth or emotional resonance into its scares – an absolute necessity for any decent ghost story. The scariness here, though undoubtedly effective, is of an entirely manipulative variety, utilising the kind of purely physical ‘shock’ effects that serve to turn a horror film into little more than a rollercoaster ride. And I don’t know about you, but I hate rollercoasters.

There is nothing genuinely disturbing in ‘The Innkeepers’, nothing that’s going to lurk in your mind in the dark hours of the night, nothing that instigates any particular catharsis, for either ourselves or the characters. Whilst it’s in progress, yes, you’ll jump outta your skin, and feel uncomfortable, and beg the characters not to go down to that bloody basement again, and so on. But when it’s over, it’s over.

Basically Ti West seems to have no interest at all in developing the narrative beyond the bare bones of a generic haunted house story, and in fact he fails to even comply with the basic expectations of the sub-genre by giving us a big reveal regarding the nature of the evil that lurks in the hotel. Some may defend that as a deliberate ambiguity, but given the lack of any particularly striking details to hook our imaginations to it just seems like a lack of interest to me, making the film a strangely hollow experience. Sure there are a few vague intimations of dark and twisted going on, but just as the Satanic cult in ‘House of the Devil’ seemed rather perfunctory when they finally turned up, the supernatural aspect of the storyline here never really extends beyond “there are some ghosts”.

It’s interesting that with both this film and ‘House..’, West seems to be building a reputation for making horror films in which all the best stuff happens before the horror starts. And in a way, I think that’s kinda applaudable – a nice reversal of the priorities of some of his more gore/shock-obsessed peers, anyway. Despite some significant drawbacks, ‘The Innkeepers’ is still well worth a watch for anyone who fancies a nice old fashioned spook movie with a bit of character to it. The humans in the film certainly pull their weight and will give you a few rewarding memories, even if the ghosts don’t.

*When that phrase was mentioned, the pedant in me immediately wanted to scream that, no, the term ‘EVP’ is traditionally used to describe mysterious voices turning up on dead radio frequencies and blank recording media – if you’re wondering around with a microphone capturing external noises then they’re just, y’know… regular recordings. Before I write an angry letter though, I’ll charitably assume this was a deliberate error thrown in demonstrate the general half-arsedness of our investigative duo, rather than a scripting mishap.
Posted by Ben at 12:01