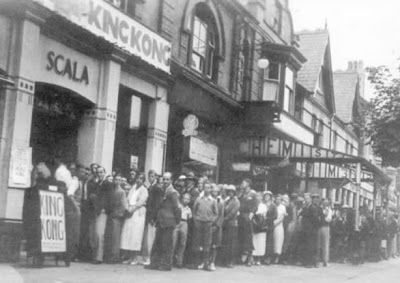 I don’t know whether I have many (any?) London-based readers, but regardless, thought I’d drop in another quick note before I get back to proper posting later this month, relating to the forthcoming Scala Forever season, which is taking place across numerous venues in the capital through August and September.

Before it was transformed into an extortionately priced and perplexingly cramped mid-level music venue catering to people who REALLY LIKE the sound of the kick drum, the Scala in Kings Cross existed for many years as London’s best-known repertory cinema, famed for its decrepit atmosphere, all night screenings and schizophrenic mixture of arthouse, exploitation and classic Hollywood fare. In a particularly heroic touch, the cinema was apparently forced into bankruptcy in 1993 as a result of a court case brought against it by Stanley Kubrick following an ‘illegal’ screening of ‘A Clockwork Orange’ in defiance of the director’s self-imposed ban.

Although I’m too young to have experienced it firsthand, I’ve heard the Scala hymned far and wide, not least by the unrepentant cinephiles in one of my favourite groups Comet Gain, whose rallying cry of “three Polanskis tonight / you bring the speed and I’ll bring the popcorn” in their song ‘Movies’ would seem to encapsulate the particular charm of this much missed venue.

Perhaps reacting to the current stagnant state of movie-going in the capital, in which the remaining independent cinemas either have to stack up kiddie blockbusters to stay in business or rely on pulling in the ‘80s babies with predictable ‘quote along’ showings of movies every fucker’s seen twenty times already, the great and the good of the city’s film clubs and DVD labels (including BFI Flipside, Cigarette Burns, Arrow/Shameless video, Filmbar ’70 and many more) have put together a sprawling season of one off screenings to keep the Scala name alive.

As you will immediately note when you hit the link in the first paragraph above, the result is a veritable cornucopia of awesome shit, ticking pretty much every box a ‘cult film fan’ (for want of a better term) could wish for. From the chance to watch ‘Phantasm’ or the second ‘..Blind Dead’ movie in a public space at 3am through to a ‘Female Prisoner: Scorpion’ triple bill, rare public exposure for Corbucci’s ‘Il Grande Silenzio’ and Fulci’s ‘Don’t Torture a Duckling’, an inexplicable double bill of ‘Theatre of Blood’ and Bunuel’s ‘Viridiana’, welcome outings for bloodcurdling perennials like ‘Black Sunday’, ‘Santa Sangre’, ‘Beyond the Valley of the Dolls’, ‘Liquid Sky’, ‘Aguirre’ and ‘Valerie..’, a flawed weirdo sci-fi double-bill of ‘The Final Programme’ and ‘Zardoz’, and, well.. I could go on. They’re even showing bloody ‘Thundercrack’ for christ’s sake (good luck with that one).

Needless to say, I’m pretty stoked to see all this going on, and to realise that there are still enough people who share my cinematic proclivities in this town to get an event like this off the ground, and I’ll try to make it to as many of these as my diary will allow. I’ll definitely be stepping out for some of the stuff I’ve never seen before, and will do my best to drag friends along to some of the obvious classics, perchance to enjoy some beers and synapse-damaging good times.

A bit of a pointless post for the vast majority of you who live elsewhere in the world I guess, but just thought I’d flag it up in order to raise awareness, register my enthusiasm and invite anyone else who’s going along to drop me a line if they’re feeling sociable.

I've only bin the the Scala once to see Built to Spill a few years back - the acoustics sounded like they were playing on a muddy sea floor. However, I also remember attending a few times for all-nighters in the 1980s. On one occasion Corman's The Trip was doubled up with The Magic Roundabout "Dougal & the Blue Cat" movie. I don't remember much else about that night, natch. ;-)