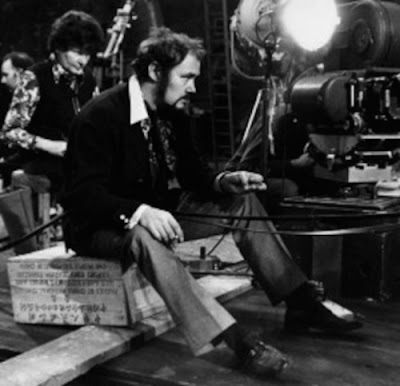 Sad to hear this weekend of the passing of another Hammer big hitter, scriptwriter/sometime director Jimmy Sangster.

Although his few efforts as director aren’t exactly revered by Hammer fans – his attempts to take the gothic formula in a cheesier, more tongue in cheek direction in “Lust for a Vampire” and the near-forgotten “Horror of Frankenstein” (both 1970) being generally considered to have fallen rather flat – Sangster can still take credit for having pretty much defined that formula in the first place through his definitive scripts for “Curse of Frankenstein”, “Dracula” and “The Mummy”, as well as sharpening his preferred genre of the Les Diaboliques-inspired psychological thriller to perfection via a whole series of lesser known Hammers, including “Taste of Fear”, “The Nanny”, “Paranoiac”, and Joseph Losey’s 1955 short “A Man on the Beach”.

Looking for some further background on Sangster’s achievements and influence, I can highly commend this excellent forum post from Dave Hartley;


“Hammer's Frankenstein combined Anthony Hinds romantic and Sangster's anti-romantic sensibilities to produce an entirely distinctive approach to the story. From Hinds suggestion that Frankenstein should be a 'shit', it was Sangster's idea to invert the structure of the story and not simply make the Baron the focal character as in the book, but a villain who becomes a monster incapable of recognising his own monstrosity. Modulated through Fisher's direction and Cushing's performance, Curse of Frankenstein emerged as something more ambiguous and complex than that, with at it's heart Frankenstein not simply a villain but an anti-hero. Sangster swiftly recognised what had been achieved and given only a fortnight to produce a first draft he produced an even better script for Revenge fully exploring the ambiguities of Frankenstein's character and actions, and giving greater expression to the ironies of 'poetic injustice' - as Ray Durgnat put it, in which no good deed goes unpunished.
[…]
Sangster made no secret of the fact that, like his close friend Michael Carreras, he was no fan of gothic horror. That distance from the material was part of his contribution - not just in his unsentimental 'straightlining' or removal of overcomplicated and unnecessary story elements and characters, and the deliberate use of touches of humour to notch things down before building them up again, but in his essentially modern approach to them as stories. These were not respectful period adaptations of acknowledged literary classics (a status the original Frankenstein and Dracula were only awarded AFTER the success of the gothic cycle Hammer kick-started). It was a lesson lost on the makers of many subsequent gothic adaptations. His scripts took a post-war, cold eyed, ironical - at times even cheeky - approach to the material. Left to himself he might have produced a more tongue-in-cheek treatment and his scripts contain lines that could have been played that way. […]Hinds and Fisher stopped anything like that. Although the lines remained they were played entirely straight to produce films that were "rich looking, slow, deliberately paced, bursting with unstated sex but with nothing overt..." (Hinds in Fangoria 11). Built on the solid exoskeleton of Sangster's scripts.”

Had forgotten that The Trollenberg Terror was one of his. An outstandingly bizarre piece of B/W Horror, which owed its convoluted plot to a radio serial, if I remember rightly.

Years since I've seen it, but I remember it as being very much in the Quatermass mould. The serial origins meant that random strange developments were thrown into the pot every fifteen minutes or so!